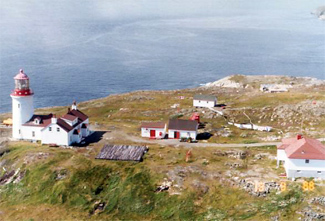 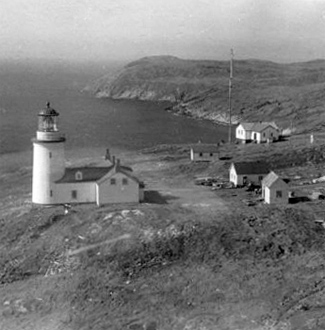 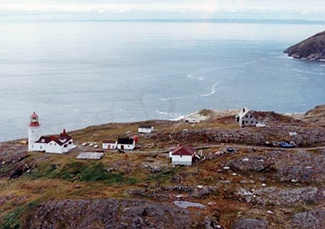 Contrary to its name, Belle Isle, French for Beautiful Island, is a barren island situated at the eastern entrance to the Strait of Belle Isle, the northern gateway from the Atlantic Ocean to the Gulf of St. Lawrence. When Jacques Cartier encountered the areas bleak landscape in the spring of 1534, he wrote, I believe this is the land God gave to Cain.

In 1853, François Baby, the proprietor of a tug line below Quebec, was contracted to build major lighthouses at the following four critical points in the Gulf of St. Lawrence: Belle Isle, Point Amour, Cape Rosier, and West Point on Anticosti Island. A location 800 feet from the extreme southern point of Belle Isle and with an elevation of 420 feet was selected as the site for its lighthouse. John Page, Chief Engineer of Public Works for the Province of Canada, noted that while the height of the site would allow the light to be seen at a great distant it was also objectionable due to low-lying fogbanks that were prevalent during certain seasons. Page reported that in every direction the island appeared to consist of a range of bare, rocky hills, without a tree, shrub or grassy spot being visible on their rugged surfaces, though he had been informed that there were a few trees somewhere in the interior of the island, which is twelve miles long and has a maximum width of two miles.

After searching for eight days, the workmen dispatched to Belle Isle in 1854 to start work on the lighthouse failed to find the spot that had been marked the previous year by John Page and so were unable to perform any work that season. Landings at Belle Isle could be made during calm weather in a small bay near the southern end of the island, and from there, the contractor had to construct a road nearly a mile and a half in length that cut through granite outcroppings as it snaked up a circuitous ravine. In 1855, arrangements were made for wintering twenty-two men at Belle Isle so construction could be continued an additional four to six weeks in the fall of the year and commenced much earlier in the spring of 1856. During that winter on the island, the men were kept busy preparing stonework for the interior of the tower. Two layers of the best English fire-brick would serve as the towers outer coating.

The steamer Doris, carrying fodder for the horses engaged in the construction work on Belle Isle, wrecked in 1856. As the island was so utterly barren as to produce no vegetation of any description for the horses, [t]he poor brutes were thus starved, and before relieved by death from their sufferings became mad and attempted to devour one another. By the end of 1856, the double-dwelling for the keepers was finished, and the only work that remained was the upper storey of the tower.

The workers were removed from Belle Isle at the end of the 1856 season and then returned the following year to complete the lighthouse. The lantern and first-order Fresnel lens for the station were manufactured in Paris, France, and mechanics from that country were dispatched to fit up the tower and train the keepers in operating the light. Belle Isle South End Lighthouse measures sixty-two feet from base to vane and is attached to the keepers duplex. The circular towers lens first beamed forth its fixed white light for mariners on March 15, 1858. By 1869, the tower had been covered with clapboards to protect it from the injurious effect of the severe frosts and easterly winds to which it was subjected.

The station was equipped with a nine-pounder fog gun that was fired every hour during fog or snowstorms and consumed about 2,000 pounds of powder per season. The keepers started firing the guns as a salute to ocean mail steamers as they passed through the strait, but when the captains reported that they didnt know if the firings were a greeting or an indication that the keepers desired to communicate with them, the practice was stopped. Starting in 1881, the frequency of the firing of the gun was increased to every half hour. In 1882, a thirty-two-pounder cannon replaced the nine-pounder.

At half-past nine on the night of August 9, 1876, the tower and dwelling were struck by lightning, which tore off clapboards on both sides of the tower and smashed through the towers door and frame. After striking a rod, the lightning entered the roof of the dwelling and passed through the upper and lower floors on both sides of the house, tearing them to pieces and seriously injuring Keeper Martin Coltin and a member of his family. The lightning also entered the stable and killed a goat and dog. To prevent a similar occurrence, additional lighting rods were added to the structures that fall.

Besides the lighthouse and attached dwellings, the station buildings also included the following in 1876: a brick powder magazine, a wooden oil shed, a wooden fog gun house, a wooden stable, three small wooden storage sheds, a house of refuge for shipwrecked mariners, and a provision depot for shipwrecked mariners. The latter two buildings were provided in case a vessel wrecked near the station, and those aboard were forced to spend an extended time on the island. The provision depot was stocked with 15 barrels of flour, 7 barrels of pork, 5 barrels of peas, sugar and tea, 12 each of pea jackets, pairs of pants, pairs of drawers, pairs of socks, caps, comforters, flannel shirts, pairs of mits, pairs of boots, 6 pairs each of snow-shoes and moccasins, 12 blankets, and 2 cases of preserved meats.

In 1879, a second light was established on the southern end of Belle Isle, 300 feet lower than the old lighthouse, where it would be less likely to be obscured by fog. The new light was housed in a wooden, pyramidal building and exhibited a fixed catoptric light at an elevation of 160 feet. The wooden tower was dismantled in 1908, and a new circular metal lantern was placed atop the towers foundation, which had been raised three feet. A second-order Fresnel lens was employed in the new structure to produce an occulting white light that was alternately visible for five seconds and eclipsed for fives seconds. Petroleum vapour burned under an incandescent mantle was used as the illuminant for the new light.

Fog signal experiments were conducted in 1890 to compare the merits of rockets fired out over the water with the thirty-two-pounder fired near the upper light and a similar gun fired at an elevation 200 feet lower. A vessel visited several points near the station while noting which of the three signals was most audible. As the rockets were judged to give the sharpest report, they were put in service at the station starting in 1891.

In 1897, $20,000 was allocated for the establishment of a first-class fog signal at Belle Island. The necessary equipment was procured in England at a cost of $9,959.07, and the total cost for the signal, which commenced operation on September 9, 1899, came to $20,112.64. First-order double sirens were established on a small white shed situated on the hillside, midway between the upper and lower lights. A water wheel at the landing place, driven by water conducted from a specially-built dam through 600 feet of ten-inch, cast-iron pipes, was installed at the landing place. Air compressed by the water wheel was then conveyed to the sirens through 4,000 feet of four-inch steel pipe. An oil engine served as backup in case the water power failed.

A new wooden fog alarm building was constructed in 1909, and in 1912, the fog alarm was relocated to the upper lighthouse.

A radio direction finding station, consisting of a tower, a power house, and a dwelling, was established near Belle Isle South End Lighthouse in 1924. By 1958, the light station was using electricity generated by the radio station, and the lighthouse itself was electrified in 1960. A single dwelling was added to the light station in the 1960s, to provide housing for the family of a third keeper.

In 1966, Assistant Keeper Clifford Flynn requested that a switch be installed at the upper light to activate the lower light. During the months of October, November, and December, Flynn wrote, the going is very rough traveling back and forth to put this light in operation. With storms of wind and icy hills it is very dangerous for any man to travel down this steep incline, and the light is situated on the ledge of a 200-foot cliff. In fact there is not a secure life-line.

A new fog alarm building was built at the station in 1968, and for some reason the paint applied to its floor would blister and bubble after just a few weeks. In March 1969, Keeper Clifford Flynn and his two assistants, Fred Osbourne and Abner Budgell, decided they would fix the problem for good. After purchasing the best concrete paint they could find, they spread diesel oil over the floor to help remove the old paint. The oil was allowed to soak in for a few days, and then Fred started an oil stove to take the chill off the room before the men starting scraping the floor. A few hours into the project, the keepers decided to sprinkle gasoline on the remaining patches of old paint to expedite the process.

No one is sure what happened next, but the fumes from the gasoline must have reached the oil stove, as flames were soon racing across the floor. The clothes of the keepers caught on fire as they hastily exited the building  two through an open door, and one through a window. Freds arm, which resembled a chicken leg that had been immersed in a pan of boiling fat, was the worst injury, but all three keepers were taken to the hospital in St. Anthony aboard a plane that had been summoned by the on-duty operator at the radio station. After treatment at the hospital, the keepers made it back to the station and were able to clean up the mess in the fog alarm building before a Coast Guard inspector was able to fully document the incident. A melted chunk of lead a few feet from the fog alarm building was evidence of the intensity of the heat.

The lower lighthouse, upper lighthouse, and keepers duplex were all declared Recognized Federal Heritage Buildings in 1990. The station was de-staffed in 2001, but the upper and lower lights remain active, each displaying a white flash every twenty seconds.

For a larger map of Belle Isle South End Upper Lighthouse, click the lighthouse in the above map.

Belle Isle South End Lower Lighthouse is best seen by boat or from the air.