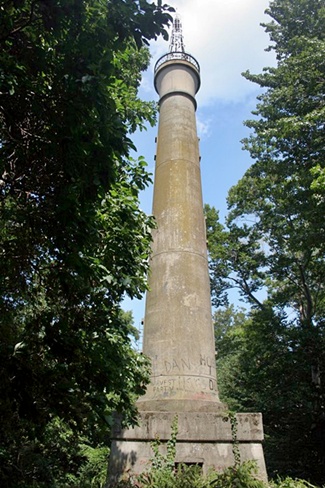 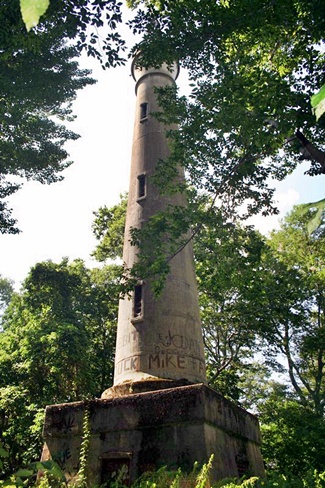 As mayor of New York City, Dewitt Clinton made the following prophetic statement in 1815 regarding the potential benefits of building a canal linking Buffalo to the Hudson River. As an organ of communication between the Hudson, the Mississippi, the St. Lawrence, the Great Lakes of the north and west and their tributary rivers, it will create the greatest inland trade ever witnessed. The most fertile and extensive regions of America will avail themselves of its facilities for a market. As for the effect the canal would have on New York City, Clinton foretold, the whole island of Manhattan, covered with inhabitants and replenished with a dense population, will constitute one vast city.

After being elected Governor of New York in 1817, Clinton persuaded the State legislature to allocate $7 million for the construction of the canal, which his opponents deridingly called Clintons Big Ditch. When completed in 1825, the Erie Canal was forty feet wide, four feet deep, 363 miles long and contained eighty-three locks to cover a rise of 568 feet. Along one bank of the canal, a ten-foot-wide towpath was provided for the animals used to pull the barges. Governor Clinton celebrated the opening of the canal by sailing its entire length and then upon reaching New York City emptied two flasks of water from Lake Erie into the Atlantic Ocean, ceremonially marrying the two great bodies of water.

The canals effect on the country was immediate and pronounced. Spurred by an economical method of transportation (rates for transporting freight between Buffalo and New York was $10 per ton compared to $100 a ton by road), settlers started pouring west to the fertile heartland, and the flow of commerce through the canal soon helped make New York Americas busiest port.

The Erie Canal was twice enlarged to accommodate bigger barges, but by the early 1900s, engineers decided a new canal needed to be built for even larger ocean-going vessels. This time around, new construction equipment made it possible to dredge the Mohawk and Tonawanda Rivers, as well as shallow spots in Lakes Oneida and Onondaga, so these existing waterways could be incorporated into the canal. Work on the project began in 1905, and the new canal, named the New York State Barge Canal, was opened in 1918.

Under state contract 132, awarded to the firm of Lupfer & Remick of Buffalo, work commenced in 1916 on three concrete towers for Lake Oneida. One of the towers was erected at Brewerton, to mark the juncture of the western end of the lake with the Oneida River; another tower was constructed at Verona Beach to mark the entrance to Wood Creek Canal from the eastern end of the lake; and the third tower was placed on Frenchmans Island, to mark a pair of islands in the southwestern portion of the lake. Lupfer & Remick was well qualified for the contract having previously constructed tall smokestacks at steel mills along the shores of Lake Erie. In a similar manner, International Chimney Corporation also of Buffalo, today works both on chimneys as well as the relocation and restoration of lighthouses and was responsible for moving the Cape Hatteras, Cape Cod and Block Island Southeast lighthouses among others.

Work at the sites of the Lake Oneida lighthouses began in the fall of 1916. Prefabricated concrete sections, eighteen feet in height, were barged in from Buffalo and used to form the outer shells of the lighthouse towers, while the interiors were lined with 4 ½ foot sections, lowered in from the top of the tower. A series of vertical steel ladders linked together platforms installed at every third interior section and provided access to the top of the tower. By the close of 1916, the Brewerton tower was completed, and the Verona Beach tower was about half done. Work on the tower at Frenchmans Island was not started until the summer of 1917 though preparatory work had been initiated earlier.

The Verona Beach and Brewerton towers were lit for the first time in the late summer of 1917, while the light at Fishermans Island was not activated until the following year. Each tower was equipped with a gas beacon that shone from within an exposed glass lens. The Brewerton light was fixed red, while the other two were occulting white. The more readily accessible Brewerton and Verona Beach lighthouses were soon connected to the commercial power grid, but the light at Frenchmans Island remained gas powered for several years.

Initially, the New York State Department of Canals and Waterways used existing state employees or hired friends or relatives to tend its more than 2,000 lighted navigational aids, but in 1920 the state, the only one to ever have its own department for navigational aids, instituted a formal program for hiring and evaluating its keepers. The program was conceived by Edward Walsh, State Superintendent of Public Works, and subjected the keepers to formal examinations, scheduled reviews, and regular inspections. Each keeper was provided a motorboat and was responsible for daily inspection of all the navigational aids in a roughly ten-mile sector.

A steel skeletal tower was mounted atop Frenchmans Island lighthouse in 1949 raising its focal plane by twenty feet and making it visible from a distance of about twenty miles. All of the towers are still active today, although tall trees obstruct Fishermans Island Lighthouse and nearby bridges over the Oneida River have essentially replaced the functionality of Brewerton Lighthouse.

The Verona Beach Lighthouse Association has been formed to care for the tower at the east end of Lake Oneida. To date, the area has been cleared of over 150 truckloads of debris, the entry door and windows have been replaced, and the surrounding area landscaped. The lighthouse has truly become a bright spot on the Lake Oneida shoreline.

For a larger map of Frenchman's Island Lighthouse, click the lighthouse in the above map.

Frenchman's Island Lighthouse is best viewed by taking a boat to the island, though a distant view of just the top of the light is possible from Oneida Bay Marina on Lakeshore Road, south of the island. A good view of the lighthouse can be had from Long Point Road when the trees don't have their leaves. After being closed to the public for several years, the island was reopened by New York State Parks in 2008.