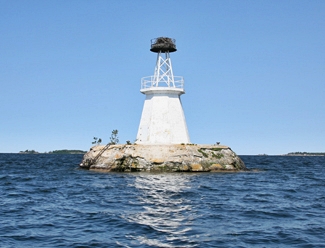 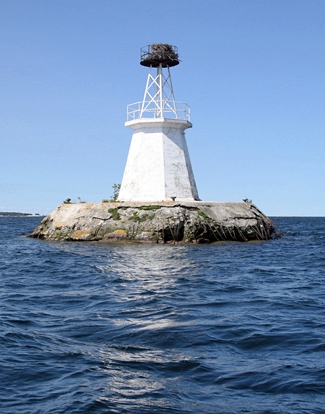 Two pairs of range lights were activated in 1894 on the approach to Parry Sound to help mariners avoid the numerous rocks, ledges, and shoals that litter the area: Snug Harbour Range and Jones Island Range. The region is known for its 30,000 islands, and the count doesnt appear to be an exaggeration.

After following the two sets of range lights, captains still have to avoid a few more obstacles to reach Parry Sound, one of which is Spruce Shoal. A steel gas buoy, painted black with the words Spruce island shoal in white letters, was anchored near the southern end of the shoal extending from Spruce Island in 1898. The buoy exhibited a fixed white seven light feet above the water that was visible for three miles.

In 1908, the Department of Marine reported that Thomas A. White was building a reinforced concrete beacon on the southern extremity of Spruce Shoal, distant 150 feet from the southwest point of Spruce Island. A thirteen-and-a-half-foot-tall octagonal cribwork foundation was sunk on the shoal in seventeen feet of water on August 31, 1907, and atop this an octagonal concrete tower was built up to a height of twenty-one feet above the water. The top of the tower originally supported a gas tank surmounted by a small steel frame that held a lens lantern. The total cost for the light was $13,373.38.

In 1915, Spruce Shoals fixed white light was changed to a white light occulted at short intervals.

Spruce Shoal Light never had a resident keeper, but rather was serviced every few weeks to make sure its lens was clean and its gas supply sufficient. The light was active through 1949, after which it was replaced by Spruce Shoal Lighted Buoy. A lighted buoy continues to mark Spruce Island Shoal today during the navigation season, and the white octagonal of Spruce Shoal Light continues to serve as an important daymark.

For a larger map of Spruce Shoal Lighthouse, click the lighthouse in the above map.

Spruce Island Shoal Lighthouse is best seen by boat. Georgian Bay Marina offers tours that can take you by the lighthouse.