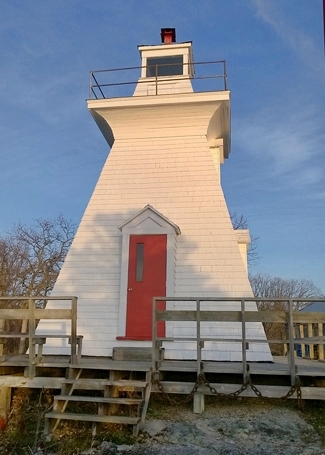 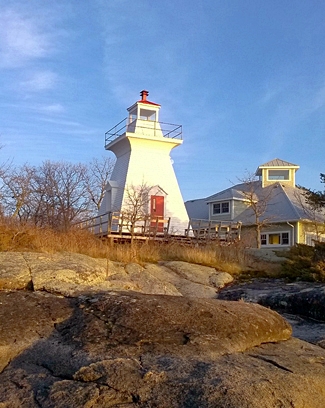 Lake of the Woods, a massive body of water sprinkled with thousands of islands, straddles the borders between the Canadian provinces of Ontario and Manitoba and the State of Minnesota. Having a width and length of over 100 kilometres and being home to over 14,500 islands, the lake has an extensive shoreline that reaches a length of over 100,000 kilometres. Lake of the Woods is fed by the Rainy River, which forms a section of the Ontario-Minnesota border, and drains into the Winnipeg River and then into Lake Winnipeg in the Province of Manitoba.

The Canadian Parliament provided funds for a lighthouse to mark the entrance to Rainy River from Lake of the Woods in 1884, and the light from a square wooden tower, with a height of thirty-three feet, was placed in operation at the opening of navigation in 1866. Thomas A. Shepherd of Winnipeg was contracted to construct the lighthouse, which cost $908.75 to build and equip.

Two range lights were put in operation on the 17th October last, in Bishops Bay, to lead through the Bay, from Bishops Point to the small islands north-east of Royal Island, clear of shoals on each side of the channel. The front building stands on a small island lying about 200 feet north of the northeast extremity of Royal Island. The back range tower stands on the north shore of Royal Island, near its east end.

Numerous cylindrical masts mark islands and reefs in Lake of the Woods today, and have replaced all of the original square wooden towers built in the late 1800s and early 1900s.

The square, wooden, pyramidal Tomahawk Island Lighthouse stood thirty-three feet tall and was originally kept by James Norton, a U.S. citizen who died in September 1901, just three months after placing the light in operation. Charles Kelly stepped in to care for the light on a temporary basis until Thomas Sweeney was officially appointed its keeper in 1902. Feeling his annual salary of $150 was insufficient, Sweeney, who was born in Ireland in 1872, asked that his salary be doubled: Considering the confinement and isolation in which a family is kept the whole year round, I think three hundred dollars salary per annum little enough. That would meet with the requirements of the place and the dignity and generosity of the department. Sweeneys superiors didnt concur, and the keepers salary remained as it was until a fifty-dollar raise was awarded in 1905.

John Atkinson served as keeper of the light from 1914 to 1922, and he was succeeded by Ludwig Treflin, who was forced to resign after just a few months due to illness. Walter Ricklefs, the last and longest-serving keeper of the light, served from August 1922 until the spring of 1946, when the light was automated.

Tomahawk Island Lighthouse continued to be used as a navigational aid until 1962, when it was replaced by a cylindrical mast. Arthur Richard Pentney obtained the disused original tower and relocated it eight kilometres east to the mainland. The lighthouse was subsequently sold to Rodney Bovee, but it returned to the Pentney family in 1974, when Ernie and Katie Pentney purchased the tower and surrounding property. Ernie Pentney had worked as a commercial fisherman and had a fishery a few kilometres northeast of Tomahawk Island so the family was familiar with the islands wooden lighthouse. Katie even remembered Keeper Ricklefs, the last keeper of the lighthouse, who she said was a kind man that the children loved dearly, since he would often take them to the top of it to look out over the lake.

Katie began researching the history of the lighthouse and found a valuable resource in Harold Jeffery of Kenora, who had traveled Lake of the Woods caring for its buoys and lighthouses. Jeffrey gave Katie a lamp and reflector used in Tomahawk Island Lighthouse that Katie used, along with copies of several photos Jeffrey had, to create a small maritime museum in the lighthouse.

Ernie and Katie Pentney have passed away, but the lighthouse remains in the Pentney family and visits are allowed by appointment.

For a larger map of Tomahawk Island Lighthouse, click the lighthouse in the above map.