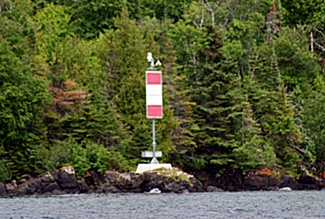 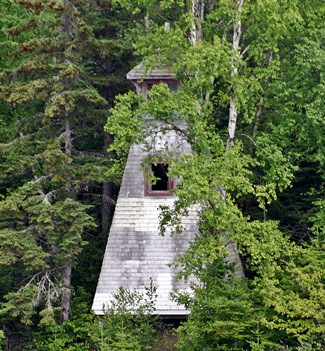 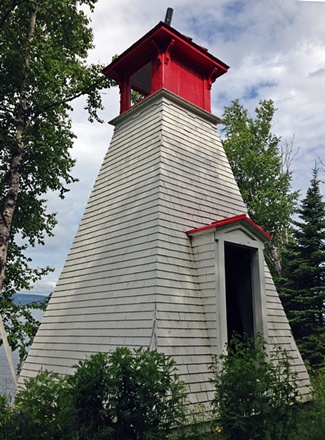 Pie Island, known in French as Île Pâté or simply Le Pâté, is the largest of several islands that clutter the entrance to Thunder Bay. Le Pâté typically means a meat pie with a crust and refers to the westernmost mesa on Pie Island. This prominent mesa, which is cliffed on all sides and rises 438 metres above the surrounding water, is now protected as Le Pâté Provincial Nature Reserve. While the main entrance to Thunder Bay lies between Thunder Cape, the southern tip of Sibley Peninsula, and the northeast side of Pie Island, smaller vessels may enter the bay from the south via a protected channel that passes along the southwest side of Pie Island. The Department of Marine marked the main entrance in 1874 with a lighthouse on Thunder Cape and the alternate entrance with a light on Pie Island in 1895:

A new light was put in operation on the 15th September last, on the west extremity of Pie Island, at the Western entrance to Thunder Bay, Lake Superior, District of Algoma.

The light is a fixed white light, elevated 29 feet above the level of the lake, and should be visible 10 miles from all points of approach by water. The illuminating apparatus is dioptric of the seventh order.

The light building is a small wooden tower, square in plan, painted white, surmounted by a square wooden lantern, painted red. The height of the building, from its base to the vane on the lantern, is 23 feet.

The tower stands upon the rocky shore of the island upon the extremity of the point adjacent to and south of the wharf on Pie Island. The wharf extends about 500 feet in a north-westerly direction at right angles to the shore line, and is distant about 400 feet north-east of the lighthouse. The light is intended to guide through the inside channel west of Pie Island, and will also indicate the position of the wharf.

The building was erected under contract by Mr. A. W. Daby, of Pie Island, for $325. The total expenditure in connection with the establishment of this light was $441.27.

Besides building the light, A.W. Daby also earned an annual salary of $75 caring for the light, before Thomas Hamilton took charge in 1899. To help mariners navigate in thick weather, Keeper Hamilton was supplied a hand-operated foghorn in 1901.

The following changes to Pie Island Light were made in 1904:

This lighthouse has been removed from the point on which it stood near the wharf, on the west extremity of the island, to the second point northward, a distance of about ¾ mile. In its new position it is immediately west of Le Paté, the highest part of the island. In its new location it stands 50 feet back from the waters edge and 15 feet above the water.

The light is elevated 34 feet above the level of the lake and should be visible 11 miles from all points of approach, except where hidden by the high land of Pie island, east of it. The lighthouse is a wooden tower, square in plan, with sloping sides, painted white, surmounted by a square, wooden lantern painted white.

A new dwelling for the lightkeeper has been built. It is a low wooden building painted white and stands 50 feet northeast of the lighthouse. The work was done by days labour under the supervision of Mr. W. H. Brunel, Ottawa, and cost $491.02.

Misfortune befell Keeper Hamilton in 1906, according to this story published on May 25th in the Oswego Daily Times: Thomas Hamilton, lightkeeper for many years at Pie Island, was found dead at the lighthouse by Indians who went to take him provisions. He was sixty-nine years old, lived alone on the island, and when found had apparently been dead for ten days.

Government records dont list who served as keeper of Pie Island Lighthouse from 1906 to 1908, when James Forbes was hired. While Keeper Hamiltons death was tragic, the demise of Keeper Forbes was gruesome. On October 21, 1911, the Syracuse Journal published an article stating that Robert Forbes, the lighthouse keeper on Pie Island, 25 miles from Fort William, was murdered by two Indians, who then helped themselves to a gallon cask of wood alcohol and died from the excess. Forbes was found with head battered in, and the bodies of the Indians were not far away.

The murderers, whose bodies were found in a cabin on Squaw Bay, were identified as Mose McCon, chief of a Squaw Band located north of Thunder Bay, and Fred Smith. The alcohol had been used at the lighthouse to clean the light.

X. Frank was hired as a temporary keeper on October 16, 1911, following the murder of Keeper Forbes, and J. Vernon assumed control of the lighthouse in 1912. Keeper Forbes served through the 1920 season, and on the opening of navigation in 1921, Pie Island Lighthouse was equipped with an automatic occulting white acetylene gas light shown from a seventh-order lantern lens. The light was made unwatched at this time, and the hand foghorn was discontinued.

In 1953, a twenty-three-foot-tall steel tower topped by a red lantern took the place of the wooden tower, but the original lighthouse was left standing. Today, the light on Pie Island is displayed from a cylindrical mast that sports a red-and-white rectangular daymark. The characteristic of this light is a white flash every four seconds.

In 2010, the Department of Fisheries and Oceans announced its intention to demolish Pie Island Lighthouse. Besides disposing of the old wooden tower, the work was to include dismantling the concrete pier foundations and performing soil remediation at the site. Tenders for the demolition were to close on August 3, 2010, and the work was to be completed by mid-September, but fortunately the destruction of the historic lighthouse was halted. Instead, the tower was spruced up and given a new coat of paint.

Pie Island Lighthouse stands on Crown land that was transferred to Fort Williams First Nation in 2011 to settle a 160-year-old land claim. The lighthouse may be relocated in the future.

For a larger map of Pie Island Lighthouse, click the lighthouse in the above map.