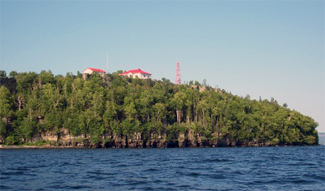 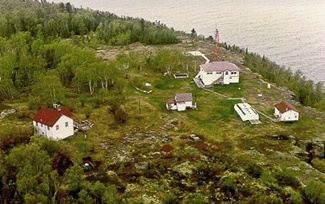 Situated ten kilometres offshore from the City of Thunder Bay, the Welcome Islands, four in number, are a welcome sight for mariners seeking harbour after a journey on Lake Superior. The northernmost two islands are the largest, each being about 800 metres long and 400 metres wide. According to an Ojibwe legend, the islands are sisters who were turned to stone and cast into the bay after killing their younger sister out of jealousy. Work on a combined dwelling and light tower began on the northernmost point of the islands in 1905, and the Department of Marine published the following description of the work in its annual report for 1906:

A lighthouse was erected on the northeast extremity of the eastern Welcome island, and the light was put in operation on the opening of navigation in 1906. The lighthouse stands on land 80 feet above the level of the lake and 160 feet back from the waters edge. It consists of a square wooden dwelling, with an octagonal wooden lantern rising from the middle of its hip roof. It is painted white, with the roof red and is 38 feet high from its base to the top of the ventilator on the lantern. The light is a fixed-white dioptric light of the seventh order, elevated 112 feet above the level of the lake, and visible 16 miles from all points of approach by water.

In addition to the lighthouse, an oil house and boathouse were also built on the island. Adolphe Perras was appointed first keeper of the light on May 10, 1906 at an annual salary of $350. Perras, the father of eleven children, was fifty-eight at the time of this appointment, and had earlier been a miner and the proprietor of the Bay View Hotel in Port Arthur.

In 1907, a wooden fog alarm building was built atop a concrete foundation near the lighthouse at a cost of $2,273.74. The building was completed on November 23, 1907, and the following spring a one-and-a-half-inch diaphone plant, purchased from the Canadian Fog Signal Company for $2,500, was installed in it. The fog alarm was placed in operation on July 15, 1908, and its horn sounded a group of two blasts every seventy seconds in this manner: two-and-a-half-second blast, five seconds of silence, two-and-a-half-second blast, sixty seconds of silence.

When Keeper Perras retired in 1913, George W. Cosgrave was transferred from Victoria Island to take charge at Welcome Island. Keeper Cosgrave retired in 1922 at the age of sixty-nine, and later that year Joseph Bousquet was brought in from Porphyry Point Lighthouse to serve on Welcome Island.

Keepers were usually removed from their stations well before Christmas, but in 1922, Keso loeper Bousquet barely made it to shore in time to celebrate, as the tug Strathbogie didnt come out to retrieve him until the afternoon of the 23rd. According to locals, this was just the second time that lightkeepers had been at their post so late in the season.

On May 12, 1915, the light on Welcome Island was changed to a fourth-order dioptric occulting white light, alternately visible for ten seconds and eclipsed for five seconds. The characteristic of the light was changed again in 1936 to a white flash every ten seconds.

In 1959, a metal lattice tower and a single-storey bungalow took the place of the original lighthouse. The new light flashed once every five seconds at a focal plane of 138 feet above the bay. An additional bungalow was added as an assistant keepers residence in 1960.

Raymond C. Silver, the final keeper of Welcome Island Light, served from 1979 to 1985 and was apparently quite fond of his island home as after he passed away in 1999 in Lunenburg, Nova Scotia, a portion of his ashes were spread on Welcome Island. Before becoming a lightkeeper, Silver served during World War II with the Royal Canadian Corps of Signals.

For a larger map of Welcome Island Lighthouse, click the lighthouse in the above map.