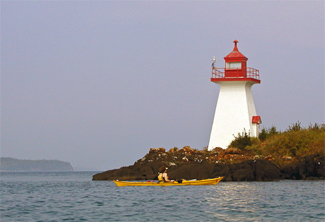 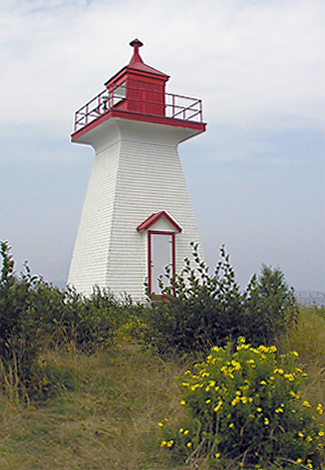 Shaganash Island is situated along the northern shore of Lake Superior, roughly twenty-six kilometres north of the eastern tip of Isle Royale. Vessels traveling along the north shore between the lighthouses at Porphyry Point and Lamb Island, could remain out in Lake Superior or follow Shaganash Channel, an inside route somewhat protected by a string of islands. To guide mariners along Shaganash Channel, the Department of Marine built a lighthouse on Island Number 10, located just off the western shore of Shaganash Island. Though it wasnt located on Shaganash Island, the lighthouse, a square wooden dwelling whose hipped roof was surmounted by a square wooden lantern, was known as Shaganash Island Lighthouse. Built by days labour in 1910 at a cost of $2,484.90, the lighthouse exhibited a fixed white light at a height of thirty-six feet above the water using a fifth-order lens.

Shaganash is an Ojibwe word used to refer to English-speaking white people, but why it was applied to this island is not clear.

Alexander Clark and F.S. Oatt, the first two keepers of Shaganash Island Lighthouse, minded the light for only a few months before William I. Fairall was placed in charge of the station in 1912. On June 10, 1912, a hand-operated foghorn was given to the keeper to answer signals from steamers in the vicinity of the station during thick weather.

In 1912, Raymond Spears set off in a rowboat on a voyage that would take him along the shores of all the Great Lakes. Spears visited several lighthouses during his journey and gave his impression of seeing Shagansh Island Lighthouse from a distance, the evening before he stopped there to visit Keeper Fairall:

As night began to close down on us there at that little island camp a light suddenly gleamed and then shone far down the water in the eastward. It was miles away, five or six, and its sparkle there was particularly interesting and pleasing. It was a lighthouse, built there for the purpose of lighting the way of barges loaded with lake shore sand on their way to Port Arthur for use in buildings. Somehow, I do not remember having seen anything that seemed so lonesome as that light there on Great Shaganash Island. The place was so utterly away from everything, separated by islands and channels, and miles and woods from all but these fishermen on Magnet Island  the little island near Magnet  that it was almost depressing; and this feeling was often with me in the days to come, as I realized how far away these good people are from everything and every one, compelled to fight alone, almost, when it is standing together and using the combined strength and wisdom of all that makes mankind strong

Keeper Fairall, who was born on the Isle of Wight in England, died at the lighthouse on April 10, 1921. He was seventy-six years old. On March 23, 1922, the U.S. Lake Survey published a notice advising mariners that owing to the destruction by fire of the lighthouse on Island No. 10, off Shaganash Island, a temporary fixed white oil light would be shown from a lantern on a pole until further notice.

Shaganash Island Lighthouse was staffed until 1954, when the hand foghorn was discontinued and the light was changed from fixed to flashing white. Today, the light flashes once every four seconds.

In August 2014, volunteers with the Canadian Lighthouses of Lake Superior, Inc., a non-profit dedicated to saving lighthouses, gave Shaganash Island Lighthouse a new coat of paint. In addition, the group placed a picnic table on the island along with a Thunderbox, a small toilet donated by a member of a kayaking group. The work was sponsored, in part, by a $2,000 award by Tbyatel For the Good.

For a larger map of Shaganash (Island No. 10) Lighthouse, click the lighthouse in the above map.

Find the closest hotels to Shaganash (Island No. 10) Lighthouse