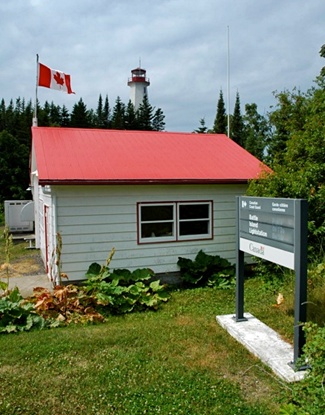 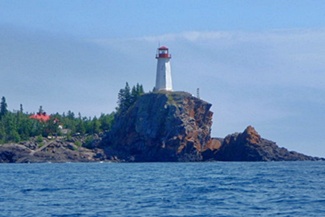 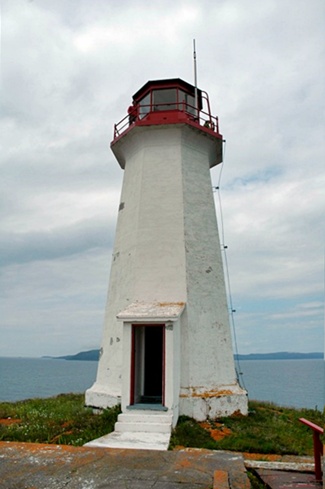 Nipigon Bay is protected by a string of islands, including St. Ignace Island, the second largest island in Lake Superior, Copper Island, Wilson Island, Vein (Salter) Island, Simpson Island, Fluor Island, and numerous smaller islands. While there are five ship channels leading into the bay from Lake Superior, only two are well-suited for large vessels: Nipigon Strait and Simpson Channel. The entrance to Nipigon Strait, used by vessels approaching from the west, is bounded by Fluor Island and Lamb Island, while the entrance to Simpson Channel, used by vessels approaching from the east, lies between Simpson Island and Battle Island.

The first lighthouse erected by the Canadian government on Lake Superior was placed on Talbot Island, just south of St. Ignace Island in 1867, and was known as St. Ignace Lighthouse. William Perry kept the light that first season, and at the close of navigation in November, he extinguished the light and started for one of the Hudsons Bay Company trading posts. Perry never reached his destination, and his body was found the following spring on the mainland shore of Nipigon Bay, about fourteen miles from the trading post.

To prevent the need for the keeper to leave the station, the government built a suitable dwelling on Talbot Island in 1869. Thomas Lamphier, the second keeper of the light, died in June 1871 and was replaced by Andrew Hynes. At the end of the 1872 shipping season, Keeper Hynes left his station and spent eighteen days traveling the fifty miles to Silver Islet. After he finally arrived, Hynes died from the effects of exposure. Having lost three keepers at the station in just five years, the Department of Marine decided to discontinue the light, as the fisheries in that region had not proved as valuable as anticipated.

In 1875, the Department of Marine contracted Joseph White to build lighthouses on Battle Island and Lamb Island to mark, respectively, the eastern and western entrances to Nipigon Bay. The lights were expected to be finished during the 1876 season, but due to unexpected difficulties encountered by the contractor, they were not placed in operation until 1877.

On August 7, 1876, Darius Smith, the Superintendent of Lights above Montreal, landed a lantern room at Battle Island, where construction materials were found but nobody was present. The lantern room was covered with lumber and left on the island for the contractor. The following description of the recently completed Battle Island Lighthouse, the northernmost lighthouse on the Great Lakes, appeared in the Department of Marines report for 1877:

The lighthouse on Battle Island exhibits a revolving catoptric light, showing alternately red and white, and attaining its greatest brilliancy every one-and-a-half minute. It is elevated 105 feet above water mark, and in clear weather should be seen 18 miles. The tower is a square wooden building, 30 feet high from base of structure to vane of lantern, and is painted white. The keepers dwelling is situated at a little distance from the lighthouse. This light was put in operation on the 27th August last, and is under the charge of Mr. Charles McKay, who was appointed keeper by Order in Council of [7th September, 1876], at a salary of $500 per annum.

As Charles McKay was not ready to go aboard the Lake Erie when it sailed, Battle Island Lighthouse was temporarily placed in charge of Andrew Dick from August 2 until Keeper McKay arrived at the station on August 27 and exhibited the light for the first time. Andrew Dick went on to serve at Porphyry Point Lighthouse for thirty years.

Battle Islands unique name is attributed to an incident related to the North-West Rebellion, an 1885 uprising of Métis in Saskatchewan. A militia sent by the Canadian government to help suppress the disturbance traveled west on the new Canadian Pacific Railway (CPR) as far as Jackfish, but they then had to make their way on foot to Rossport due to an uncompleted section of the railroad. During this trek, they were fired upon by the local Ojibway, who were sympathetic with the plight of the Métis, and this skirmish reportedly led to the naming of Battle Island. While this makes a good story, it cannot be the original source of the name, as the island was called Battle Island in Department of Marine records dating to 1875.

Unlike the short careers of the keepers of St. Ignace Lighthouse, Charles McKay endured an amazing thirty-six seasons on Battle Island. Before being renamed in 1884 for a CPR construction supervisor, Rossport was originally known as McKays Harbour, having been named for Alexander McKay, who operated a fur trading post in the area, and for his son Charles, keeper of Battle Island Lighthouse. Charles McKay was known as a man of fine physique and a real waterman. He spent his first two winters as a lighthouse keeper near Rossport, but for the third, he rowed his small skiff nearly 300 miles along the northern shore of Lake Superior to reach Sault Ste. Marie on Christmas Eve. Keeper McKay looked after the light until 1913, when Edward McKay replaced his seventy-five-year-old father as keeper.

During Edwards ten years at Battle Island, the station received a few notable enhancements. In 1914, work began on three new structures: a square, wooden building to house a diaphone fog alarm, a thirty-foot-tall, octagonal lighthouse to replace the original wooden one, and a double dwelling to house the two keepers now needed to look after the light and fog alarm.

The new lighthouse was placed in operation on May 12, 1915 and employed a triple-flash, long-focus reflector to produce the following characteristic: flash, four-second interval, flash, four-second interval, flash, sixteen-second interval. For twelve seconds, or half of the lights revolution, the light was totally eclipsed, while for the other half a light of 450 candlepower was visible, intensified by flashes of 20,000 candlepower. The illuminant for the new light was petroleum vapour, burned under an incandescent mantle. The fog alarm, which replaced a hand-operated foghorn given to Keeper McKay in 1901, sounded a three-and-a-half-second blast every thirty seconds as needed.

The only fatality on Battle Island occurred in August 1932, when Keeper Malcolm Sutherland drowned. His wife served out the remainder of the shipping season, and John J. Sutherland took charge of the station the following year.

A moose born on Battle Island in 1953 decided to call the place home, much to the surprise of the lighthouse keepers as there were no other moose on the island and very little to eat. The moose started out as a pet, but as it grew it soon gained the name Obnoxious, as it made havoc of the stations garden and would mangle any equipment left unprotected. The animal soon became a nuisance, snorting and charging at Keeper George Brady anytime he went outside. The story of Keeper Brady jailed in his narrow tower on Battle Island by a ferocious beast captured the imagination of the press, and the keeper was soon receiving mail from various parts of Canada and the United States, including one letter from Bradys brother in Ottawa who was concerned about his wellbeing.

During the fall of 1954, Keeper Brady solicited advice from his superiors regarding the moose predicament. Department of Transport officials contacted the Forestry Department, and a game warden was sent to Battle Island with a couple of gunmen. These men had a hard time tracking the moose, and when they finally managed to spot him, all four of their shots missed. Four days later, the warden returned with a photographer from the Toronto Telegram, and, adopting a more humane approach, the warden was able to get the moose into the water and direct it to another island.

While the experience provided some good laughs for Keeper Brady, he was happy to see Obnoxious leave the island and just hoped he never returned.

Bert Saasto retired in November 1991 as the last keeper of Battle Island, but his connection with the lighthouse didnt end there. Saasto subsequently returned to the island each summer to serve as a volunteer caretaker and interpreter until being diagnosed with cancer around 2013. One of the pieces of the islands history that Saasto enjoyed pointing out to visitors was the boiler from the steamer Ontario, which ran aground on the island in a dense fog on August 10, 1899. The Ontario, which was bound for Nipigon to pick up a load of pulpwood, was a total wreck, but its crew was rescued. For many visitors to Battle Island, having the chance to meet Saasto and learn about the history of the island was the highlight of their trip. The following is his account of a November gale in 1977 that packed eighty-mile-per-hour winds:

The waves from Duluth built to fifty feet high and when they hit the rocks below the light they were strong enough and high enough to wash all the way up the tower. Thats about a hundred and twenty feet in all! They smashed the glass right out of the lantern. The storm lasted for three days and nights, and the roar of the storm is deafening. Thats what puts the fear of God in you, the sound of the wind and the waves. You cant get away from it. You almost panic and you feel like running, but out there, theres nowhere to run to.

For a larger map of Battle Island Lighthouse, click the lighthouse in the above map.

Battle Island is best seen by boat. A multi-day sea kayaking tour that offers a chance to see the lighthouse is available.