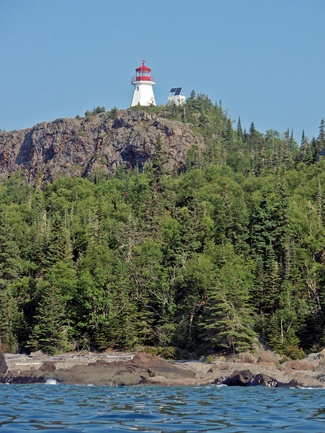 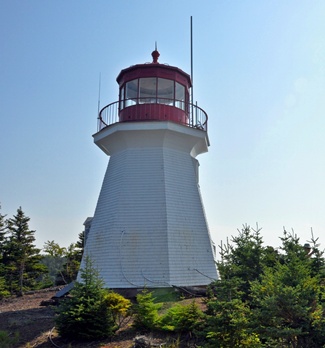 Situated a dozen kilometres offshore from Terrace Bay along the northern shore of Lake Superior, the Slate Islands archipelago is composed of two main islands, Patterson Island and Mortimer Island, five minor islands, and numerous islets. The islands are believed to have been formed by a large meteorite strike, and since 1907 they have been home to a herd of woodland caribou. In 1985, Slate Islands Provincial Park was formed to protect the archipelago.

In 1903, the Department of Marine had twin lighthouses built along Lake Superiors northern shore at Otter Island and the Slate Islands. The following description of the tower on the Slate Islands was published in the departments annual report for that year:

A lighthouse has been erected on the south extremity of the south Slate island [Patterson Island], in the north part of Lake Superior.

It is an octagonal wooden building, with sloping sides, painted white, surmounted by a polygonal iron lantern painted red. The height of the building from its base to the vane on the lantern is 36 feet.

The tower stands on the summit of the hill which forms the south side of a harbour, now named Sunday harbour, at the south extremity of the group of islands. The light keepers dwelling, a white wooden building, is on the beach of the harbour, northeast from the lighthouse.

Pending the completion of the permanent illuminating apparatus for this lighthouse, a temporary fixed white light, was on October 28, 1903, exhibited from a seventh order dioptric lens placed in the lantern.

The light is elevated 224 feet above the level of the lake, and should be visible 10 miles from all points of approach by water.

The buildings here were erected by Mr. Wm. Fryer of Collingwood, who took a contract for them and the Otter island work jointly as hereinbefore detailed.

Besides the lighthouses on Otter Island and the Slate Islands, William Fryer also built Île Parisienne Lighthouse and the Wilson Channel Range Lights. Peter King of Port Arthur, Ontario was hired as the first keeper of the lighthouse at an annual salary of $400, and he lived on the island with his wife and three sons. Joseph King, one of the sons, later penned a poem entitled My Slate Island Home, which included these stanzas:

As Peter Kings sons, we lived up to his name:
Our strong, sturdy sire who sought not for fame,
But contented himself with keeping the light
Which guarded those freighters that pass in the night


We roamed through the islands, we traversed the lakes
Fishing, exploring, doing all that it takes
To make boys happy when given the chance
To hear Natures song and take part in her Dance.

In 1908, the Lake Carriers Association recommended that a fog signal be established on Slate Islands in connection with the light there, but it wasnt until 1914 that J. OBoyle and Company of Sault Ste. Marie, Ontario erected a frame building on the shore south of the lighthouse to shelter a diaphone fog alarm supplied by the Canadian Fog Signal Company of Toronto. Once placed in operation, the foghorn sounded a three-and-a-half-second blast each minute.

While the fog alarm was being installed, the characteristic of the light was changed to group flashing white, showing a group of two flashes every fifteen seconds in this manner: flash, three-and-a-half-second eclipse, flash, eleven-and-a-half-second eclipse. During the first half of the period, or seven-and-a-half seconds, the light was totally eclipsed, while for the other half a fixed light of 700-candlepower was shown, intensified by the flashes of 25,000 candlepower.

An automatic radiobeacon was established at the station in late October 1926. In clear weather, the radiobeacons characteristic was transmitted for three minutes each hour, but during foggy weather, it operated continuously, transmitting in a sequence with the radiobeacons on Michipicoten Island and Cove Island.

Slate Islands Lighthouse remains active today, still exhibiting a pair of white flashes every fifteen seconds. The lights focal plane of 224 above Lake Superior makes it the highest light on the Great Lakes. Two modern keepers dwellings, the fog alarm building, a generator building, and a survival building are found on the southern shore of Patterson Island, while the original keepers dwelling remains standing on Sunday Harbour.

John Bryson served as keeper of Slate Islands Lighthouse for thirty years, and during the latter portion of his career, he and his family started to fix up the original keepers dwelling, which had fallen into disrepair. When he retired in 1978, the Canadian Coast Guard allowed Bryson to use the old dwelling as a summer home, and the Bryson family continues to lease and care for the structure to this day.

For a larger map of Slate Islands Lighthouse, click the lighthouse in the above map.

Slate Islands Lighthouse is best seen by boat. A multi-day sea kayaking tour to Slates Islands that offers a chance to see the lighthouse is available.