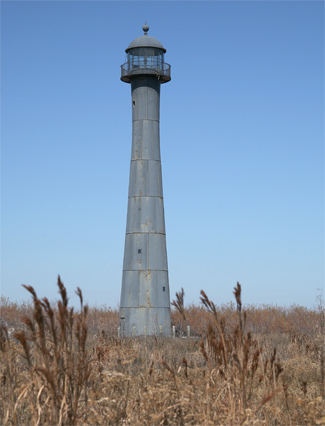 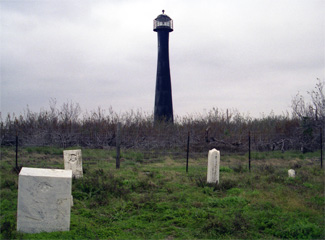 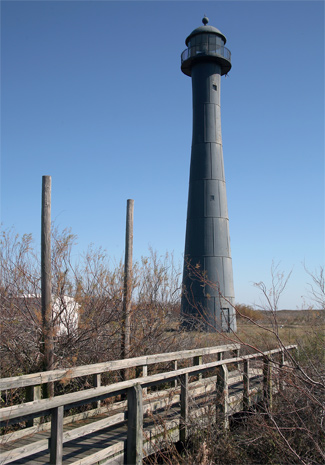 Though hard to imagine today, the port of Indianola was once the second busiest in Texas, next only to Galveston. Indianola is located in Matagorda Bay, and to reach the port, ships had to pass through Pass Cavallo, a gap between Matagorda Peninsula and Matagorda Island. The Republic of Texas recognized the need to mark this entrance, and the tip of Matagorda Island was considered an ideal location for a lighthouse. The history of Matagorda Island Lighthouse closely parallels that of its twin tower at Galveston. Before it made significant steps towards lighting its shores, the Republic of Texas was annexed by the United States, and the federal government assumed responsibility for navigational aids along the Texas coast. Congress set aside fifteen thousand dollars on March 3, 1847 for lights at Texas two busiest ports, but over five years would pass before the lighthouses became a reality.

First, the Lighthouse Service had to negotiate the purchase of acreage on Matagorda Island, which was accomplished by 1848. Next, the government of Texas was required to cede jurisdiction over the property before construction on the lighthouse could commence. The necessary bill was passed by the state legislature in 1849, but the governor failed to sign the document until September 29, 1851.

With the bureaucratic hurdles cleared, the firm of Murray and Hazlehurst in Baltimore started casting the iron sections that would create the fifty-five-foot tower. The necessary materials arrived at Matagorda Island during the summer of 1852, and the iron tower, with a brick lining, quickly started to rise above the island. A wooden dwelling was built nearby for Keeper James Cummings, who first lit the revolving array of reflecting lamps in the towers lantern room on December 31, 1852.

During the next decade, a series of upgrades would be applied to the tower. The lighthouse was painted during its first year of service, receiving a distinctive daymark of alternating white, red, and black horizontal bands. The following year, a wire enclosure was built around the lantern room to protect the lantern rooms glass plates and lamps from misguided birds. To increase the range of the light, additional iron sections were cast and used to raise the lantern room an additional twenty-four feet, giving the otherwise conical tower its distinctive long, straight neck. After the recently formed Lighthouse Board had finally adopted the Fresnel lens developed in France in 1822, a rotating third-order lens was placed in the newly extended tower and activated in July 1859.

On February 1, 1861, Texas became the seventh state to secede from the Union. During the ensuing Civil War, most of the lights along the Gulf Coast were extinguished, so they would not aid the blockading Union forces. The lens from Matagorda Lighthouse was removed from the tower and crated for storage. At this point, the stories of the Galveston and Matagorda Lighthouses diverge. The Galveston Lighthouse was completely dismantled during the war, and its precious iron was most likely used in the war effort. Matagorda Lighthouse almost disappeared too, when confederate soldiers were ordered to destroy the tower. Fortunately, their explosive charge only succeeded in damaging six of the towers iron sections and removing a large chunk of its foundation.

In 1865, after the war ended, a temporary, three-story wooden tower, fitted with a fifth-order Fresnel lens, was put into operation on the island until the original tower could be repaired. The keeper and his family lived in this temporary tower that leaked very badly, as the original keeper's dwelling did not survive the war. When the encroaching surf threatened to topple the already damaged tower in 1866, the lighthouse was disassembled and its pieces stored atop one of the islands high spots. A new tract of land, located two miles farther inland, was then purchased from the state of Texas for the new station. The transaction was completed in the spring of 1869, but workers didnt arrive to rebuild the tower until early in 1872. Work was suspended on July 31, 1872 due to a depletion of the $20,000 appropriation and then resumed the following May, after another $12,000 had been provided.

Matagorda Island Lighthouse finally returned to service on September 1, 1873, with a new one-and-a-half-story residence for the keeper standing nearby. For this tour of duty, the tower was painted an unimaginative solid black and outfitted with a new third-order Fresnel lens, manufactured by L. Sautter and Company in Paris, France and fitted with six bulls-eye panels. The lens produced a white flash every ninety seconds at a focal plane of ninety-one feet above sea level.

The low-lying barrier island on which the lighthouse stood offered very little protection from the hurricanes that occasionally buffeted the area. The hurricane of August 19-20, 1886 forced the keepers and their families to seek refuge in the iron tower. The high winds shook the tower, loosening one of the lens bulls-eyes, which fell and broke into pieces on the lantern room floor. The floodwaters rose to a depth of four feet in the tower, while the keepers dwelling was severely damaged, and most of the outbuildings destroyed. This hurricane erased what was left of the once important port city of Indianola, which had been devastated by the hurricane of 1875. The 1875 hurricane destroyed two screwpile lighthouses, built to mark the channel leading into Matagorda Bay, and drowned the four keepers of the lights.

On a warm, muggy evening in October 1918, the islands powerful light attracted an inordinate number of flying insects. The keeper thus described the scene: During the night from the 12th to 13th instant it was calm and not a bit of air, and the bugs got so thick around the lantern that they obscured the light. The small bugs got in through the ventilators, even though I have screen wire over them. I had to shovel the bugs up in the lantern, as well as on the lantern gallery, by the shovelful.

Insects werent the only animals to trouble the keepers. Keeper Arthur Barr, who assumed responsibility for the station when his father-in-law William Heinroth retired in 1948, recalled that the only bad thing about life on the island was the rattlesnakes. As a precaution, the keepers were supplied antivenin in case someone on the island was bitten.

Commercial electricity reached the tower in 1956, and shortly thereafter the station was automated. Keeper Barr, who relocated to Port OConnor, still served as a civilian custodian for the lighthouse and, assisted by two coastguardsmen, made twice-a-month checks of sixty-one beacon lights around Matagorda Bay until his retirement in 1966. In 1977, the Fresnel lens was removed from the tower. The Coast Guard planned to deactivate the light, but protests from the public kept the light in service until 1995.

Houston oilman Dewey Stringer, who had visited the lighthouse as a child with his father, was dismayed at the condition of the lighthouse when he returned to the island in 1997. Stringer and then County Judge Arlene Marshall recruited some friends to form the Matagorda Island Foundation, which obtained a $905,000 Texas Department of Transportation Grant to restore the lighthouse.

The groups first major accomplishment was the relighting of the tower on December 31, 1999, just in time for the new millennium. Completion of Phase I of the restoration, which included repairing the foundation and lantern room and painting the tower, was celebrated with a June 11, 2004 gathering at the lighthouse. On hand for the celebration were descendants of James E. Cummings, the first keeper of the lighthouse. In the ceremony, a key to the lighthouse was ceremoniously handed from Senior Chief Brian Winterbottom, U.S. Coast Guard, to Walt Dabney, Texas Parks and Wildlife Department, to Charles Holbrook, U.S. Fish and Wildlife Service, to Calhoun County Judge Mike Pfeifer and Calhoun County Commissioner Kenneth Finster. The passing of the key represented the complicated process that had to be carried out before the tower could be restored. The Coast Guard had to first transfer the lighthouse to the U.S. Fish and Wildlife Service, who then granted a long term lease to Calhoun County. Texas Parks and Wildlife Department maintains the land surrounding the lighthouse.

Future plans call for the reconstruction of the keepers quarters. The Fresnel lens used in the tower can be seen at the Calhoun County Museum in Port Lavaca along with oilcans, a funnel, and the station's logbook. The logbook is open to a page showing entries by William Heinroth and Arthur Barr, the final two keepers of Texas oldest lighthouse.

For a larger map of Matagorda Island Lighthouse, click the lighthouse in the above map.

The lighthouse is located on Matagorda Island, which is controlled by Texas Parks and Wildlife. Ferry service to the island used to be available, but the ferry burned and has not been replaced. Some local captains have offered transportation to the island in the past. The lighthouse is three miles from the dock and its interior is not open to the public. You can peer through a window and see the 97-tread spiral staircase. A distant view of the lighthouse is possible from Port O'Connor.

The Fresnel lens used in the Matagorda Island Lighthouse is on display at the Calhoun County Museum in Port Lavaca.

The lighthouse is owned by Texas Parks and Wildlife. Grounds open, tower closed.


On our first trip to the island, park personnel kindly offered to drive us to the lighthouse. However, on a return visit, the park service had left the island, and so we had the choice of walking the three miles from the dock to the lighthouse or renting bikes. We decided to have our captain supply bicycles, and we pedaled the three miles over the flat but somewhat rutted roads. During the trek, we noticed several areas where it appeared something or someone had been digging about. I thought it could be alligators, but the mystery was solved when we arrived at the lighthouse and a startled feral boar with impressive tusks went bounding away to seek cover in the nearby dried reeds.

The small cemetery located just east of the lighthouse contains some headstones bearing names of people who lived at the lighthouse. Among these are Theodore Olsen who served as keeper from 1913 until his death, which is listed as December of 1918. Two other tombstones bear the names of Adeline Forestier and William Henry Forestier who were respectively the wife and infant son of Keeper Joseph Forestier.

This lighthouse always reminds me of a giant pepper grinder - you know the kind with the twistable top that they use in restaurants for applying fresh pepper to your Caesar salad or pasta.