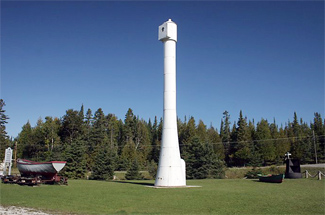 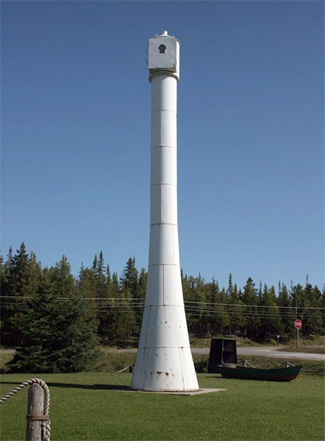 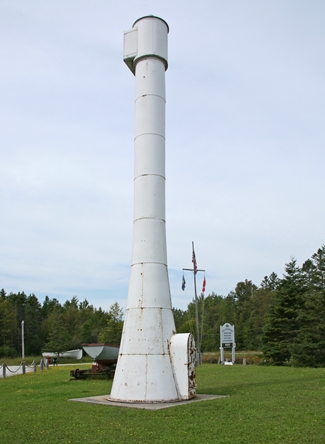 The State of Michigan built the first Soo Locks, but by the 1870s, the national importance of this link was clearly evident, and the federal government funded the construction of the 515-foot-long Weitzel Lock. When this larger lock opened in 1881, the operation of the locks was transferred to the federal government, and the U.S. Army Corps of Engineers has been responsible for their operation and maintenance ever since.

Due to the increase in traffic on St. Marys River following the opening of Weitzel Lock, Congress appropriated $200,000 on August 2, 1882 for improving Hay Lake Channel. (Hay Lake is now known as Lake Nicolet). Over the next twelve years, the channel was expanded to a minimum width of 600 feet and a depth of at least twenty-one feet.

With the Hay Lake Channel improvements completed in 1894, Congress provided $43,550 on August 18 of that year for lighting the channel. Starting the following spring, the lighthouse tender Warrington delivered materials for a series of lights that were numbered from 1 to 27. Land on Six Mile Point was purchased for a rear range light (No. 20), while the companion front light (No. 19) was placed offshore atop a crib.

The western shore of Lake Nicolet can be accessed by parallel roads, spaced a mile apart, that are named 3 Mile Road, 4 Mile Road, 5 Mile Road, etc. Six Mile Point is located between 5 Mile Road and 6 Mile Road, and in 1898, an oil house was built at the point along with a 310-foot-long landing dock that extended out to where the water had a depth of six feet.

In 1906, pile foundations were built for a new pair of range lights at Six Mile Point to mark the axis of the channel at Little Rapids Cut. The new lights, first exhibited on December 1, 1907, were shown from white, cylindrical, steel towers. The front light, with a focal plane of twenty-eight feet above the water, was located in eight feet of water, roughly three-eighths of a mile above Six Mile Point, while the rear light, which had a focal plane of forty-seven-and-a-half feet, was situated just off the point in two feet of water and was located 1,975 feet from the front light.

In 1909, a man, who owned property adjacent to the oil house and whose house was about an eighth of a mile northwest of the rear tower, was being paid to attend the lights using his own boat. The lens lanterns used in the towers were raised and lowered by wire cable and an iron winch located in the base of the structures. The lanterns were housed in a cage with a wooden base and were guided by two wire cables, anchored to the roof and floor.

Six Mile Point Range Lights were electrified in 1933, and today the lights are shown from modern towers: a cylindrical tower for the front light and a skeletal tower for the rear range light. A brick oil house also remains standing near the modern lights. At some point, the 1907 steel towers were removed from the range and taken to museums. The old front tower now stands on the grounds of DeTour Passage Historical Museum in De Tour Village, while the old rear tower can be viewed at Les Cheneaux Historical Museum in Cedarville.

For a larger map of Six Mile Point Range Rear Lighthouse, click the lighthouse in the above map.

From I-75, fourteen miles north of St. Ignace, take Exit 359 and follow M-134 east for 17.3 miles to Cedarville, where you will find Six Mile Point Range Rear Lighthouse on the grounds of Les Cheneaux Historical Museum at the intersection of Hwy M-134 and Lake Street.