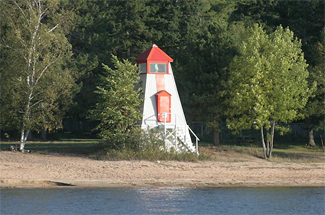 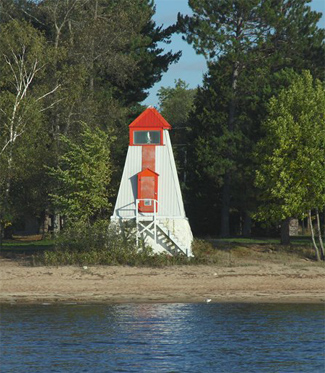 While exploring the area in 1615, Samuel Champlain discovered a small band of people called the Nipissings living along the north shore of the lake. This tribe was known to have special powers that included talking with spirits, casting spells, and interpreting dreams. The Nipissings were unaffected by most of the tribal wars in the area until a great battle broke out between the Nipissings and the Iroquois in the mid-seventeenth century, which decimated the Nipissings. Legend has it that a small group of Nipissings escaped to the Manitou Islands in the lake. As winter advanced, food became scarce, and the tribe sent a young girl to a shore tribe near Sturgeon Falls. When the elders of that tribe visited the Manitou Islands a few days later, there was no trace of the Nipissings and no clue where they went.

Along the south shore of Lake Nipissing, marking the entrance to Callander Bay, stands Southeast Bay Lighthouse. Built in 1887, it is the only working historic lighthouse left on the lake. A contract was made in 1886 to place two beacon lights at the mouth of the South River on the southern shore of Lake Nippising, but it was later decided to place one of the lights at the entrance to Southeast Bay due to the increase of shipping there. The Annual Report of the Department of Marine for 1887 describes the lights completed that year at South River and Southeast Bay:

Mr. D. M. S. White successfully completed his contract for the erection of two beacon lights on Lake Nipissing. One of these is established on the extremity of a point near Mr. N. M. Campbell's tannery on the west side of the mouth of South River, in such a position as to guide steamers to the mouth of the river past the shoals that extend northward and eastward from it. The light, which was first put in operation on the 25th May last, is fixed white, shown from a lenticular lantern hoisted on a mast elevated 28 feet above the lake, and visible ten miles. The mast is 25 feet high, and has a wooden shed painted white at its base.

The other light on Lake Nipissing, which was put in Operation on the same day, is located at the entrance to South-East Bay. It is fixed white, elevated 30 feet above the lake and visible ten miles. The illuminating apparatus is dioptric of small size. The lighthouse tower is a square wooden building 21 feet high, painted white, with a red roof, and stands upon a cribwork pier which was built for its reception by Mr. J. E. Booth at no expense to the Department, the stipulation made in changing the site of this light being that it should be done without involving any extra expenditure on the public service. The total cost in connection with erecting these two lights has been $729.85.

Callander Bay measures two miles from north to south, and two-and-a-half miles from east to west. Its water is less than thirty feet deep, and in the winter, it completely freezes over.

During the late nineteenth century, the bay was a hub of logging activity. Steam tugs would transport logs to the bays Wasi Falls, where they were lifted into a shoot that carried them over to the Ottawa River System.

The Great Depression was a difficult period for Northeast Ontario, but the area near Callander Bay once again became a buzz of activity, when the Dionne quintuplets were born on May 28, 1934. The five identical girls  Yvonne, Emilie, Annette, Marie, and Cecile  were born two months premature and survived against enormous odds. In 1936, a playground was built, and the girls were put on display for four hours a day. Around 6,000 visitors would stop by each day, and Quintland became Ontarios biggest tourist attraction.

Callander Bay continues to bustle in the summer with vacation cottages, camps, and lodges.

For a larger map of Southeast Bay Lighthouse, click the lighthouse in the above map.

Southeast Bay Lighthouse is best viewed from Lake Nipissing as it is surrounded by private property and inaccessible from land. Chief Commanda II passes by the lighthouse on its Callander Bay/Sunset Cruise. Geln Echo Cottages are located near the lighthouse and have kayaks and canoes that their guests could use to see the lighthouse.