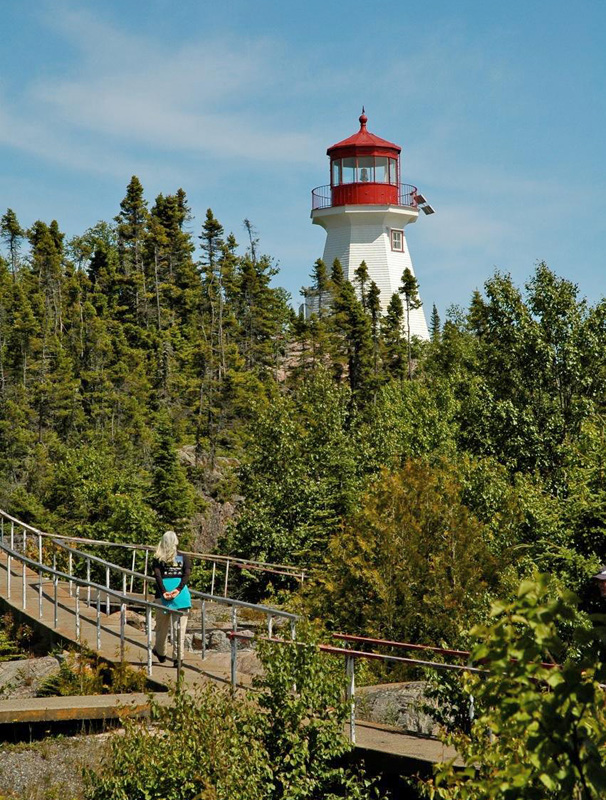 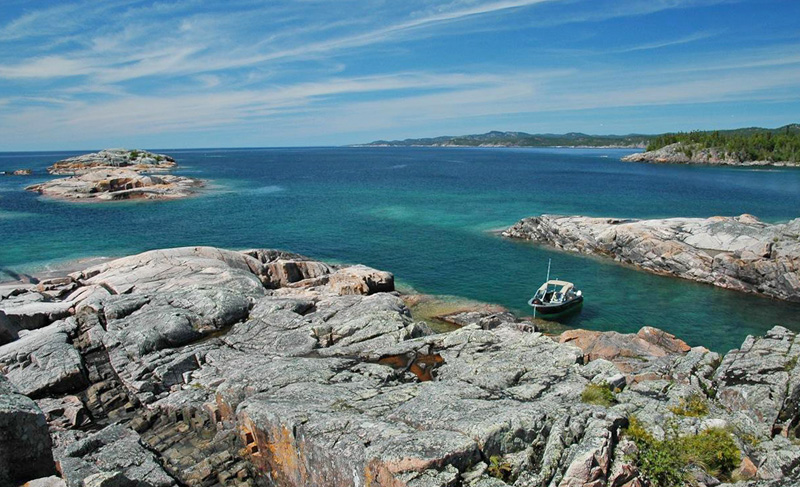 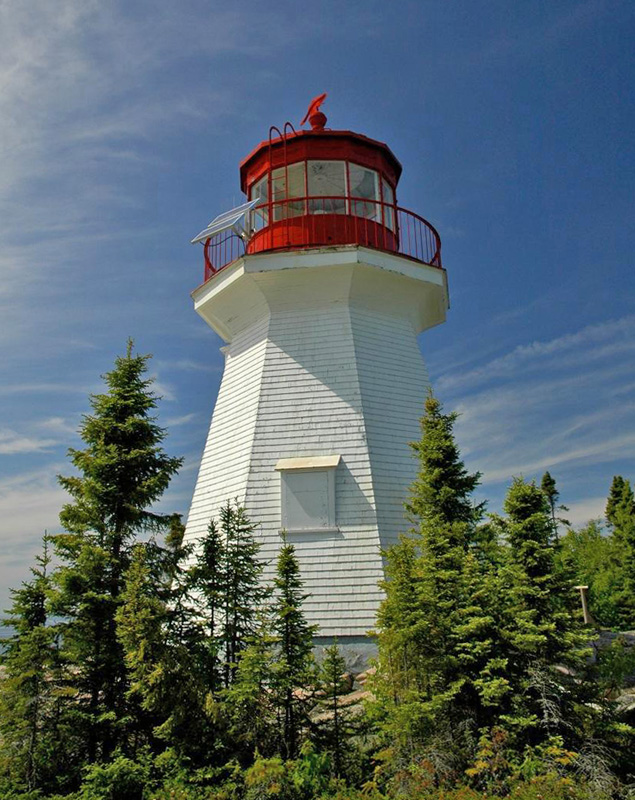 Canadas Highway 17 provides an opportunity to see much of Lake Superiors northern shore, but between Wawa and Marathon, the highway goes inland, making the stretch of shoreline between those two towns the most remote on the lake. A good portion of this shoreline, including Otter Island, is now part of Pukaskwa National Park, which attracts adventurous hikers and kayakers with its unspoiled beauty.

In 1903, the Department of Marine erected a lighthouse on the northwest tip of Otter Island, off Otter Head, and provided the following description of the work:

The lighthouse is an octagonal wooden building, with sloping sides, painted white, surmounted by a polygonal iron lantern painted red. The height of the building from its base to the vane on the lantern is 36 feet.

Pending the completion of the permanent illuminating apparatus for this lighthouse a temporary fixed white light was on October 23, 1903, exhibited from a seventh order dioptric lens placed in the lantern. The light is elevated 97 feet above the level of the lake, and should be visible 10 miles from all points of approach by water.

The buildings at this station were erected by contract by Mr. Wm. Fryer of Collingwood. His contract price for the work here and at Slate islands together was $9,400.

Robert McMenemy was hired as the first keeper of the lighthouse. In 1910, Keeper McMenemy was given a hand-operated foghorn to use to respond to steamers whistles during limited visibility, and on August 25, 1914 long-focus reflector replaced the stations lens, altering the light from fixed white to a white flash every eight seconds. The illuminant was petroleum vapour burned under an incandescent mantle.

The government informed its keepers in 1915 that it would no longer provide transportation to and from lighthouses. Instead, each station was issued a sailboat to make the often perilous journey. This decision resulted in the deaths of Keeper Robert McMenemy of Otter Island and Keeper William Sherlock of Michipicoten Island and his son, who all perished while trying to reach civilization after the 1917 shipping season. Katherine McMenemy, Keeper Sherlocks widow, was awarded a compassionate allowance of $500, and she looked after the light for a brief period following the death of her husband.

Otter Island Lighthouse was temporarily discontinued in 1918, and then replaced on July 29, 1919 by an unwatched acetylene light occulted at short intervals. In 1920, Malcolm Sutherland was placed in charge of the light, and on September 15 of that year a diaphone fog alarm was established atop a cliff, 400 feet west of the lighthouse. Operated by air compressed by an oil engine, the diaphone foghorn sounded a two-second blast each minute.

On December 1, 1930, when Gilbert McLachlan was serving as keeper on Otter Island, Johnny Moore, a sixty-eight-year-old cripple that was serving as McLachlans assistant, was accidentally killed in a fall from the tower. Keeper McLachlan discovered Moores body half-buried in the snow later that day and attempted to signal passing ships with the stations fog alarm. Jack Mills finally heard the foghorn from Puckasaw, twelve miles away, and set out for the station. After learning of the tragedy, Mills attempted to return home to send a telegram, but he was blocked by the weather. Keeper McLachlan was forced to keep the light by himself for twelve days until he was removed at the end of the season along with Moores corpse.

An article in a 1968 edition of Transport Canada entitled The rugged individualists who man our inland lights, provided the following description of Robert Collins, keeper at Otter Island Lighthouse:

Typical of the lighthousekeepers is Bob Collins, 58, chief keeper on Otter Head Island.

Bobs post is only a mile or so from the mainland but once ashore its almost trackless brush. Practical travel is by boat to Sault Ste. Marie, 110 miles southeast.

Yet Bob has a simple philosophy about the requirements needed for a good lightkeeper on the lonely Lake Superior stations.

He must be what Bob terms a good sound thinker, have patience, be a jack-of-all trades, like the outdoors, have a hobby.

He must be able to plan tomorrows work today and, most important, be able to overlook the other chaps shortcomings.

Today, a boathouse and a two-storey keepers dwelling remain standing on the south shore of Old Daves Harbour, and 450 metres to the west are the lighthouse, fog alarm building, and a more recent one-storey keepers dwelling. Otter Island Lighthouse sends out a white flash every ten seconds to assist mariners during the navigation season.

For a larger map of Otter Island Lighthouse, click the lighthouse in the above map.