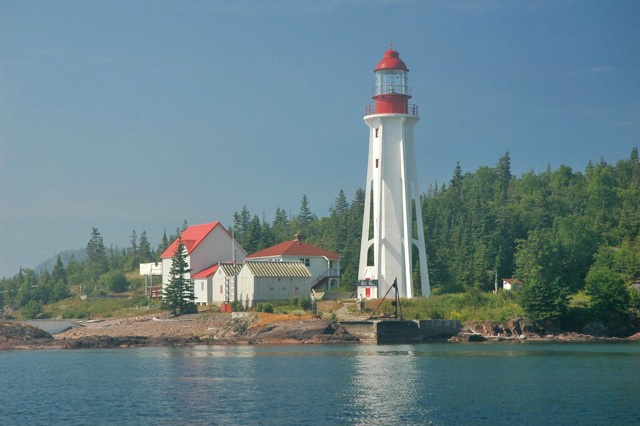 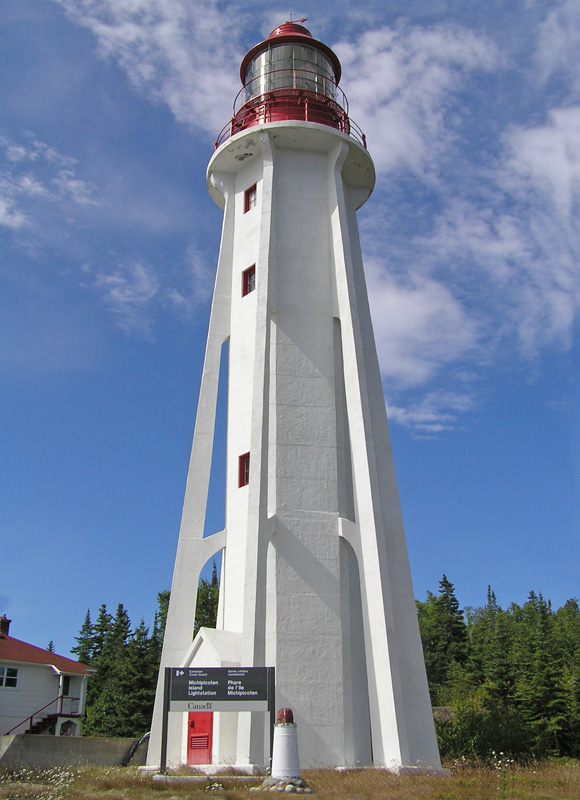 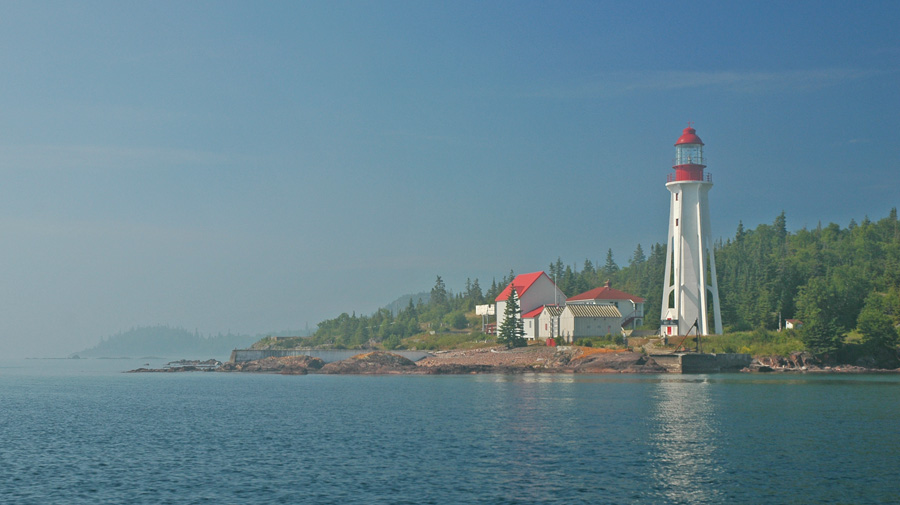 Michipicoten Island, the third largest island in Lake Superior, is situated in the northeast corner of the lake, sixty kilometres from the mouth of the Michipicoten River. The island has a natural bay on its southern shore known as Quebec Harbour, and in 1872 two lights were erected to help guide mariners into the harbour and along the lake. One of these lights was located on Agate Island, just inside the harbour, while the other was located on the islands southern point.

In 1908, the Lake Carriers Association requested that lights and fog signals be placed at both the east and west ends of Michipicoten Island, and three years later, the Department of Marine commenced work on a lighthouse for the islands east end. During 1911, a hexagonal, concrete tower, stiffened by six flying buttresses and surmounted by a circular iron lantern room, was built along with a dwelling, oil store, and boathouse.

At the opening of navigation in 1912, the new lighthouse commenced displaying the following pattern every six-and-two-thirds seconds from its third-order Fresnel lens: one-third-second flash, one-second eclipse, one-third-second flash, five-second eclipse. The tower stood eighty-three feet tall form its base to the top of its lantern, and its light was displayed at a focal plane of eighty-four feet above Lake Superior. The illuminant was petroleum vapour burned under an incandescent mantle, and the light could be seen for up to fifteen miles from all points of approach by water.

William Sherlock was hired as the first keeper of Michipicoten East End Lighthouse in 1912, and at the close of the following years navigation season, he elected to remain on the island for the harsh winter months rather than cope with the high cost of living on the mainland at Sault Ste. Marie. Keeper Sherlock preferred to live on the island where rent at least, is a negligible factor, since no landlord can possibly come to collect it and where the only bills to be presented will be those of occasional sea-gulls. The steamer Premier called at Michipicoten Island and removed his in-laws, Mr. and Mrs. Brown, but Keeper Sherlock and his family stayed behind with plenty of provisions. In 1914, Keeper Sherlock was given a hand-operated foghorn to answer signals from vessels in the vicinity during thick weather.

The government informed its keepers in 1915 that it would no longer provide transportation to and from lighthouses. Instead, each station was issued a sailboat to make the often perilous journey. William Sherlock recounted his eighty-day struggle to reach the mainland with his son James in December 1916 to a reporter with The Sault Star:

We left the lighthouse on the 14th of the month, because our docks had been swept away by the ice and the seas and we saw that if we waited any longer we wouldnt be able to get out. We started out at two in the afternoon in an eighteen foot boat and after we had gone about 14 miles we ran into a northeaster. Our pump froze and we had to take to the oars. It was 12 degrees below zero at Gargantua that night. Our boat began to take in water and we gradually had to throw everything we had away to keep afloat. First we threw away 25 gallons of oil, then an emergency sail we were carrying and finally our provisions. Our bodies were caked in ice and we could hardly bend either our legs or arms. One of the oars slipped away from my son in the afternoon and he reached for it but slipped over the side of the boat; but fortunately I grabbed him and got him out of the water.

Then I thought I could hear something and after listening for a while, I could hear the surf. In a short time we struck Leach Island where we made a fire. We were there for three days without anything to eat except a few biscuits that we saved out of the ice in the boat.

The boat was in pretty bad condition, but I fixed it up as well as I could and we left Leach Island at 4:30 in the afternoon of the 18th. We struck out for the North Shore which was three miles distant, my son at the oars and I bailing all the way. There was not much of a sea on but it was bitterly cold and the wind was quite high. We finally struck the North Shore after five hours between Gargantua and Telegram Rock. There was a hill a short distance away and my son crawled to it, from which point he could see the islands lying off Gargantua. All the time we were carrying with us a puppy which we had brought up in the spring. We killed him when we struck the North Shore and this kept us alive until we struck Gargantua. We could only travel very slowly and we had to crawl most of the way. Between us and Gargantua there were a number of bluffs and we had to go around most of these. We finally arrived on the 22nd. We left with Charley Miron, the lighthouse keeper there, and arrived in the city on Tuesday night [the 26th].

At the close of the following season, Keeper Sherlock and James again set off for the mainland, but they never showed up in Sault Ste. Marie and no trace of them was ever found. Mary Sherlock took charge of the lighthouse after the disappearance of her husband and served until 1925.

In 1929, an automatic radiobeacon was added to the station on the east end of Michipicoten Island. The radiobeacon transmitted continuously during foggy weather and for just four minutes at each hour during clear weather. A diaphone fog alarm, which sounded a two-second blast every thirty seconds, was established at the station in 1953. Whenever the fog alarm was active, a synchronized transmission of the fog alarm and radiobeacon would take place every three minutes, allowing mariners to calculate their distance from the station in statute miles by dividing the time of arrival between the two signals in seconds by five.

During the summer of 1960, Robert F. Carr, executive vice-president of the Dearborn Chemical Company of Chicago, ran his yacht Aquila hard aground on the northwest corner of Michipicoten Island while cruising Lake Superior with his family. Keeper Fred Francis tried to help free the boat, but the attempt was unsuccessful. Francis contacted Port Arthur and was told that the CMS C.P. Edwards would reach the island the next morning. When the Edwards arrived, a two-inch hawser was fastened around the Aquilas hull, and the vessel was pulled off the island with only slight damage. Carr wrote a letter to the Minister of the Department of Transport expressing his gratitude. The presence, kindness and courtesies of the two gentlemen from the lighthouse and Captain Massales is something I have never had the opportunity to witness before. Their work and assistance will never be forgotten.

In September 1961, a U.S. Coast Guard helicopter from Traverse City flew to Michipicoten Island and plucked up forty-one-year-old Keeper Alfred Thibeault, who was suffering from appendicitis. Thibeault was flown to a hospital at Sault Ste. Marie where his appendix was promptly removed.

In 1972, Joe Thibeault, an Ojibway Indian and keeper on the island, married Cape Breton-born Ann Whitehouse on the beach at Michipicoten Harbour. Thibeault was dressed in Indian regalia as he rode up the beach on horseback for the ceremony. The couple met briefly in Toronto several years earlier and later started corresponding. Anns letters helped ease the loneliness of Joes life as a lighthouse keeper, and the two became engaged by mail in 1970.

Mel Sherlock, son of William Sherlock, the lights first keeper, was serving on Michipicoten Island in 1967, when Dr. George Laverty, associate professor of psychiatry at Queens University, Kingston, was aboard the Canadian Coast Guard Ship Porte Dauphine as it picked up the keepers from their station late that year. Laverty was studying the men who maintained the lonely lighthouses on Lake Superior and found that they were unusually stable, well-adjusted people, who were able to think about things without getting bored. There was only one quality possessed by the keepers that might be considered odd on the mainland: They seem to have an obsessional interest in keeping their islands tidy and free from debris. This proclivity for neatness may have been instilled by the strict regulations imposed on their service.

Keeper Sherlock spent his spare time on Michipictoren Island making intricate jewelry from semiprecious agate and amethyst he collected near the station. Sherlock didnt see too much of the head keeper, Joe Thibeault, during the nine months they spent together on the island, but that was by design, as an isolated outpost was no place for over-familiarity. That is the best way to get along together, said Sherlock. Thibeault, a bachelor, wouldnt have exchanged his lightkeeping career for anything else. Have you ever heard of a lightkeeper who had to send for a psychiatrist? he asked with a wink.

Michipicoten East End Lighthouse was staffed until 1988, and it remains active today, showing a white flash every ten seconds.

For a larger map of Michipicoten Island East End Lighthouse, click the lighthouse in the above map.

Michipicoten Island Lighthouse is best seen by boat or from the air. Sea kayaking tours that circumnavigate the island are available.

The third-order Fresnel lens from Michipicoten Island Lighthouse is on display at Museum on Tower Hill in Parry Sound.