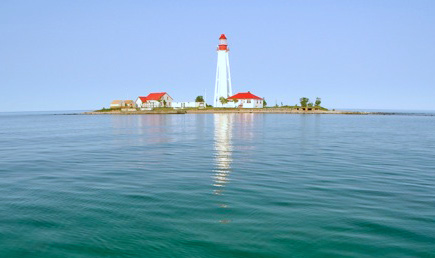 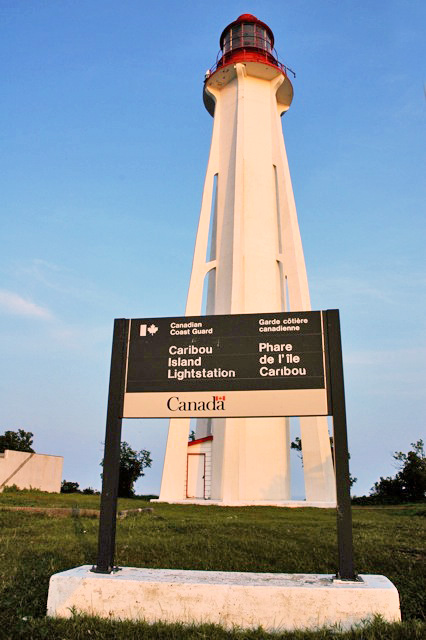 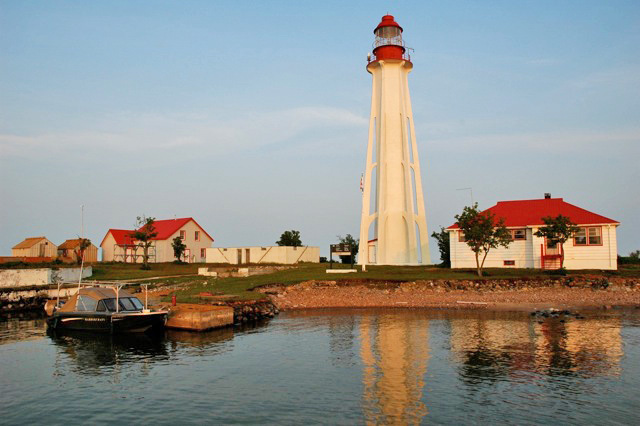 Situated in the eastern end of Lake Superior, forty miles from the Canadian mainland and forty-five miles from the U.S. mainland, Caribou Island is the most remote island in Lake Superior. The three-mile-long and one-and-a-half-mile-wide island lies near major shipping routes, and dangerous reefs extend from its perimeter.

Parliament provided funds for a lighthouse and fog trumpet to mark Caribou Island in 1884, and a $6,475 contract was awarded that year to John George and David Currie of Port Elgin to carry out the work. Rather than place the lighthouse on Caribou Island, authorities selected a small, five-acre island one mile west of the southern tip of Caribou Island as the site for the beacon. This smaller island later came to be known as Lighthouse Island. Considerable progress was made during the 1885 season, and the following description of the station was provided by the Department of Marine shortly after the light was commissioned in 1886:

The lighthouse and fog-alarm at Caribou Island, Lake Superior, have likewise been completed, and were put in operation on the 26th August last. The light is white, revolving, showing a bright flash every 10 seconds. The illuminating apparatus is catoptric. The light is elevated 76 feet above the level of the lake and should be visible 15 miles. The tower is an octagonal wooden building, 80 feet in height from base to vane; painted white, with red lantern. It stands in the centre of a small island, on the south-west side of Caribou Island. The fog-alarm building is of wood, square, painted white, with brown roof, and is located 100 feet south of the lighthouse tower. The horn is operated by compressed air and sounds a blast of 5 seconds duration every 30 seconds. The total expenditure at this station in connection with the construction amounts to $11,635.02, including cost of two foghorn machines.

R. May served as the first keeper of the lighthouse, but he served just a few months, as Charles James Pim was appointed keeper in April 1887. Born in 1854, Charles Pim was the son of David and Margaret Pim, early settlers of Sault Ste. Marie who had Pim Street named after them. Keeper Pim served at Caribou Island Lighthouse until 1898 and later became the clerk for Sault Ste. Marie, a position he held until his death in 1914.

Wilbord Demers was the next keeper, taking charge of the light in 1899. In December 1904, there was much anxiety at Sault Ste. Marie for the safety of Demers and Fred Pelletier, his helper, after the tug Reid called at the island to retrieve the men at the end of the shipping season. The tug was unable to land due to heavy seas, but no one responded to persistent blasts of its whistle. A payment of $5,000 to the Reid Wrecking Company and $1,084 to the Sault Ste. Marie Tug Company that appeared in the Report of the Auditor General for 1904  1905 was attributed to the rescue of the lighthouse keepers at Caribou Island, and the men must have been saved as Keeper Demers served at Caribou Island until 1906.

Due to its remoteness, getting to and from Caribou Island was the most hazardous part of serving there. More than one keeper had a narrow escape from death, and two lost their lives. George Johnston was serving at Caribou Island in 1915, when the government informed its keepers that they would no longer provide transportation to and from lighthouses. Instead, each station was issued at twenty-eight-foot sailboat to make the journey. To improve his chances of survival, Johnston equipped his open sailboat with a kerosene engine, a small cabin, and a coal heater, but even with these measures, he nearly perished. Johnston and his assistant had to wait ten days after the end of the shipping season on December 15, 1919, before conditions finally allowed them to set sail for the mainland. Poor weather forced them to seek refuge at Quebec Harbour on Michipicoten Island, and the pair was then trapped in ice in Michipicoten Bay before they finally reached Michipicoten Harbour on New Years Day.

Ottawa finally relented in 1921, after losing at least one keeper, and provided the C.G.S. Lambton to transport the keepers to and from the lights. On April 18, 1922, the Lambton sailed out into Lake Superior amid ice floes and delivered Keeper Miron at Gargantua Harbour, before sailing for Caribou Island the next day. Somewhere on the nineteenth, the Lambton went down, taking with it George Penfold, keeper of Caribou Island, and his assistant, and two keepers and one assistant destined for Michipicoten Harbour and Ile Parisienne, along with the Lambtons crew of sixteen.

Upgrades to the station at Caribou Island came in the form of a five-inch duplicate diaphone plant, with twelve-horse-power engines, that was installed in the fog alarm building in 1910, and a new lighthouse erected in 1911. The Lake Carriers Association provided the following description of the modern tower:

On the opening of navigation, 1912, a second order, dioptric flashing white light, showing a group of three flashes every ten seconds, was established at Caribou Island Light Station, and the former revolving white light was discontinued.

The new light is exhibited 99 feet above the water from a hexagonal reinforced concrete tower, surmounted by a red circular metal lantern, and visible fifteen miles from all points of approach. The height of the tower, from its base to the vane on the lantern, is 104 feet. The luminant is petroleum vapor, burned under an incandescent mantle.

William P. Anderson, Chief Engineer of the Department of Marine, championed the use of reinforced-concrete and designed nine such towers that were supported by graceful flying buttresses. Six of these towers remain standing today, and of these the tallest and most striking are those at Caribou Island and Michipicoten Island (ON), Pointe-au-Père (QC), and Estevan Point (BC).

Caribou Islands second-order Fresnel lens was manufactured by Chance Brothers of England and was originally rotated by means of a grandfather-clock-type mechanism using weights to turn the gears of the apparatus. These weights were fastened to a cable which dropped down through the centre of the lighthouse. In order to keep the light rotating, the keeper would have to crank up the weight every six hours. Friction in the turntable apparatus was kept to a minimum by using a mercury bath as the flotation medium. The giant lens would produce the following pattern every ten seconds: 0.5-second flash, 1.2-second eclipse, 0.5-second flash, 1.2-second eclipse, 0.5-second flash, 6.1-second eclipse.

Rauleigh Hurley spent several summers at Caribou Island Lighthouse with four siblings, his mother, and his father Art Hurley, who served as keeper for nearly thirty years. The family would travel to and from the station aboard the fishing tug James Purvis, after having been dropped off on Michipicoten Island by the S.S. Caribou. It was really rough and we all got sick, Rauleigh recalled.

The Hurley children would row over to Caribou Island and hunt for net floats, which they would sell to fishermen for a nickel. The family also had a garden on the big island. When Rauleigh was a teenager, he served as his dads helper in 1944 and 1945 as there was a shortage of men due to the war.

One time by grandfather [Charles Hurley] was on the island, Rauleigh said. He could hear people screaming out in the fog. Their boat had broken down and theyd been out on the water for a week. My dad brought them in.

In 1944, a radiobeacon was established at Caribou Island along with a flashing white electric winter light placed on the gallery of the lighthouse. The radiobeacon was synchronized with the foghorn so that mariners could readily determine their distance from the station. Five aluminum trihedron radar reflectors, sixty-six-and-a-half inches on a side, were mounted near the gallery level of Caribou Island Lighthouse in 1948. These reflectors served until 1955.

Reg Dawson was keeper of Caribou Island Lighthouse in 1968, when an article was published in which he said that the only drawback his job had was the lack of a public library. To pass time on the remote island, Dawson tried his hand at writing fiction.

In the early 1960s, diesel generators were installed on the island and the light was electrified. An electric motor was adapted to rotate the lens, and a 400-watt mercury vapour lamp provided the light source, which could be see over twenty miles on a clear night.

The lens was removed from service in 1992 when the light station was solarized and a twelve-volt D/C rotating beacon was installed in the lantern room. The magnificent Fresnel lens is now on display at the Canadian Coast Guard base in Parry Sound.

For a larger map of Caribou Island Lighthouse, click the lighthouse in the above map.

Caribou Island Lighthouse is best seen by boat or from the air.