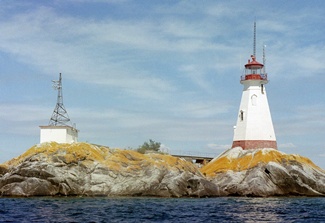 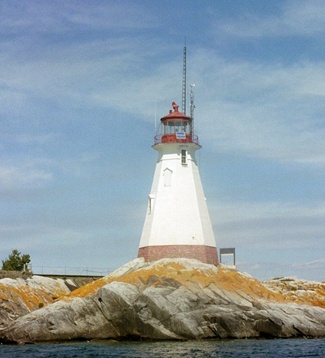 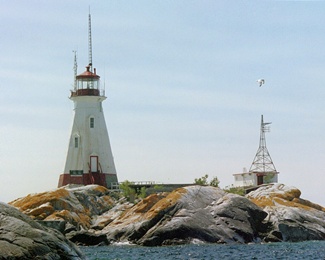 In its annual report for 1895, the Department of Marine provided the following details on the newly erected lighthouse and fog alarm building on the Western Islands:

The Western Islands, off the Eastern coast of the Georgian Bay, have always been a menace to navigation, as they are on the route from Collingwood to Parry Sound, and on the route from the gap to Midland Bay, a route greatly used by grain vessels in the stormy nights towards the close of navigation. It was therefore considered desirable to mark them by a light and fog-alarm, which have been erected on Double Top Rock, at the south-western extremity of the group of islands, and which were put in operation on the 24th October, 1895. In consequence of the exposed location of these islands, it was necessary to erect buildings capable of resisting heavy spray.

The lighthouse tower stands on the south-west part of the rock. It is an octagonal wooden building with sloping sides and is painted white. It is surmounted by an iron lantern painted red. The height of the building from the rock to the vane on the lantern is 59 feet.

The light is fixed white, elevated 74 feet above the level of the bay, and should be visible 14 miles from all points of approach. The illuminating apparatus is temporarily dioptric of the seventh order, but it is intended to replace this by a more powerful apparatus.

The fog-alarm building stands on the west extremity of the rock, N.N.W. 80 feet from the lighthouse. It is a square wooden building painted white, with the duplicate horns issuing from the west face.

The fog-alarm consists of a horn operated by steam and compressed air, which gives blasts of 8 seconds duration, with intervals of 40 seconds between the blasts. The machinery is in duplicate, so that in case of a horn or boiler becoming inoperative, the other can be used.

The buildings were constructed by Messrs. Reed & Green, of Owen Sound, whose contract price was $4,788. The fog-alarm boilers and machinery were made by Messrs. Carrier, Lainé & Co., of Levis, at a cost of $2,400, and were set up by Mr. W. H. Noble; the lighthouse lantern was made by the Chanteloup Manufacturing Company of Montreal. The total expenditure on the installation of this station, up to date, has been $8,303.28.

In accordance with the intention expressed in the above excerpt, a fourth-order Fresnel lens, manufactured by Chance Brothers & Co. of Birmingham, England, was installed atop Western Islands Lighthouse on October 12, 1896. The lens, which cost $1,399.10, produced a fixed w light varied every thirty seconds by a bright flash. In addition to installing the lens, W.H. Noble also erected a new boathouse, a derrick for landing supplies, and a platform extending from the landing to the stations various buildings.

Given the stations exposed location, it was anticipated that the heavy seas that typically occurred during the fall and winter might cause some damage to the stations buildings. In 1897, shingles on the north side of the dwelling had to be relaid, thirty feet of tramway was rebuilt, and shutters were added to the exposed windows. In 1901, it was simply noted that, It was necessary to greatly reinforce the buildings to withstand damage by waves.

In 1910, a new fourth-order lens was installed in the lantern room, changing the lights characteristic to a bright flash every fifteen seconds. As part of this change, the illuminant was changed to petroleum vapour burned under an incandescent mantle.

On September 9, 1919, a diaphone foghorn, operated by compressed air produced by an oil engine, replaced the old steam fog alarm plant. The new fog signal sounded a three-second blast every thirty seconds. In 1920, the gully between the dwelling and fog alarm building was bridged by a concrete walk.

Frank Rourke served as head keeper on Western Islands from 1956 to 1958, followed by stints at Great Duck Island and Cape Croker. Some writings of Juanita Rourke, Franks wife, were compiled into the book Up the Shore: The Lighthouse Years and include the following description of a powerful fall storm at Double Top when the winds were gusting to seventy miles per hour.

Double Top Island where the lightstation is located is about 20-25 feet high when the water is low, nearly 200 feet long and about 50 feet wide. It is divided into three areas by deep rough crevices and had nothing to shelter it from the howling wind and the raging seas.

The sixty foot lighthouse stood towering 74 feet above the water on a high spot on the island. It was an old lighthouse and rattled in the wind. Twenty feet away, separated from the lighthouse by one of the deep crevices, was the fog alarm, the most westerly building on the tiny island. A hundred paces eastward was the house that straddled another deep cut in the rock and when storms raged the water roared through the crevice under the house. At times it came high enough to tumble under the front door.

...Gerry poured coal into the tall potbellied stove while Frank checked the engine and wrote in the log book.

It was fairly warm in the shelter of the [fog alarm] building and while they worked they kept an eye on the revolving light above. The gale reached its peak around midnight all the while the elements battered the white building. Shingles were torn from the roof; in one blast the west side of the roof was stripped and water came pouring in.

A big wave hit, tearing the shutters away and breaking the window. A wall of water rolled in through the huge hole throwing Gerry dangerously close to the flywheel of the motor. Water flowed a foot deep over the floor and out the big doors. Wave after wave came pouring in, swirling around the compressors. The wind whistled through, tossing papers off Franks desk and carrying oil cans crazily across the floor.

Frank and Gerry fought to cover the hole with canvas but the wind was too strong, repeatedly pulling the canvas from their grasp. The engines belts, wet by then, began to slip. There was nothing to do but shut the plant down. Man and machine were not match for the wild storm.

As Double Top Island would be encased in a layer of ice in the late fall and winter, a cable way was put in place in 1914 to help the keepers remain upright while transiting the walkways. James Keith, who served on the island from 1950 to 1952, recalled: that cable would get a foot thick with ice. It would get so that all you could do was hook your arm around it, walk and pull yourself along. Youd take a hammer and smash it off when you get a chance. The islands ice casing actually added some comfort to Keeper Arnold Wing. It would be below zero and the waves would hit that house pretty heavy, Wing said, but with that much ice covering the place youd think let her go, shes not going to hurt us.

Living at such a remote, inaccessible outpost required special preparations and presented certain risks. Each spring when the Wings arrived on the island, they would have with them hundred-pound bags of flour and sugar, a fifty-pound drum of powdered milk, and a large supply of eggs preserved in brine. Fruits and vegetables had to be canned, and the seasons meat typically consisted of six or seven sides of cured bacon, supplemented by fish caught at the station.

During Harry Coulings time on the island, between 1959 and 1965, his son Bill was struck with acute abdominal pain while playing in the lighthouse. When the pain didnt subside, Keeper Couling tried to launch the stations boat for a trip ashore, but the seas were just too rough. Dr. Churchill Swan in Midland was contacted via radio for a remote diagnosis, and a seaplane company was talked into attempting to fly out to the islands the following morning.

I was eleven so I wasnt really paying attention, said Bill, but I guess they figured if it got any worse my Dad was going to have to do emergency surgery to take out my appendix. He would have done it too  it wouldnt have bothered him. Guy Larocque managed to land a seaplane in the lee of the island the following morning, and Bill was transferred to it from a rolling boat. After a short flight, Bill arrived in Midland, where his appendix was promptly removed.

Following automation of the station, the Coast Guard arrived to demolish all buildings save the original lighthouse. The boathouse quickly yielded to the workers axes and crowbars, but when the men tried to dismantle the dwelling, the stout structure held its own. After toiling a couple of days with little progress, someone decided dynamiting the house was the only way they were going to get off the rock before winter. A whole case of dynamite was brought to the island, and a few sticks were suspended in each room and linked together with a detonating wire. A thundering explosion blew the walls and floors apart, but the chimney stood resolute and required additional work to dismantle it.

With the original outbuildings removed, the historic wooden lighthouse carries on its vigil alone, sending out a comforting white flash to mariners every ten seconds.

For a larger map of Western Islands Lighthouse, click the lighthouse in the above map.