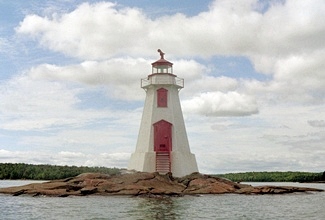 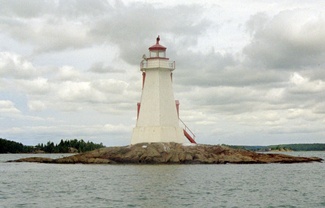 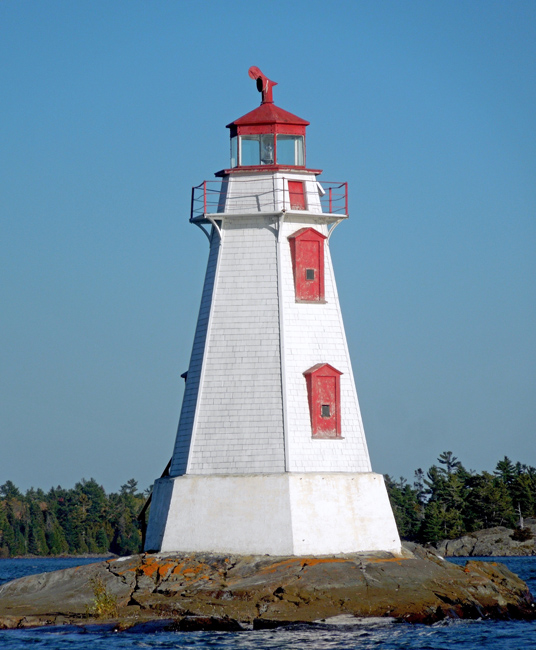 The North Channel, which runs between the Ontario mainland and offshore islands like Manitoulin Island, Cockburn Island, Drummond Island, and St. Joseph Island, offers a protected alternative to the open waters of Lake Huron, but it has its own dangers in the form of numerous islets, rocks, and ledges. One example of these dangers are the Sister Rocks, four in number (East, West, North, and, South), that lie between the eastern end of Campement dOurs Island and Portlock Island, and just north of St. Joseph Island.

In 1883, the Department of Marine invited tenders for the construction of five lighthouses to help mark the North Channel: one on North Sister Rock, one at the head of Wilsons Channel, one on Shoal Point, and two on Manitoulin Island  one at Cape Robert and one at Manitowaning,

John Waddell of Kingston was hired to build the lighthouses for $9,023, but when he failed to fulfill the contract, the Department of Marine was obliged to complete the works at his expense.

A white, hexagonal tower that displayed a fixed white light at a height of thirty-five feet was activated on North Sister Rock in 1885 to help mariners entering and leaving the Canadian entrance to St. Marys River.

William Wieghtman was hired as the first keeper of the lighthouse on November 6, 1885, and he served until 1902, when Joseph Thibault was placed in charge of the light. Keeper Thibault was issued a hand foghorn in 1904, which he was required to use to answer signals from steamers trying to navigate near the lighthouse in thick weather. As there was no space on the rock for a residence, the keepers dwelling associated with the lighthouse was located on Portlock Island, 650 metres northeast of North Sister Rock.

The light on West Sister Rock was automated and changed from fixed white to flashing white in 1951, allowing Thomas Jondreau to retire after having looked after the light for thirty-two years. West Sister Rock Lighthouse remains active today, emitting a white flash every four seconds during the navigation season.

For a larger map of West Sister Rock Lighthouse, click the lighthouse in the above map.

West Sister Rock Lighthouse is best seen by boat. An aerial view of the lighthouse is offered by Mackinac Seaplane Tours.