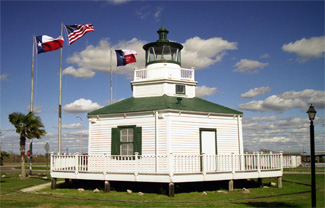 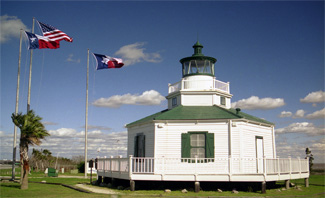 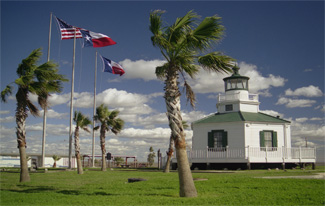 Halfmoon Reef Lighthouse still welcomes visitors to Port Lavaca. However, having been moved ashore from its perch above the waters of Matagorda Bay, it now performs that function for travelers entering Port Lavaca from the east on Highway 35, rather than for mariners arriving from the gulf. After Matagorda Island Lighthouse began guiding traffic into Matagorda Bay in 1852, requests were made for additional lights to mark channels and obstacles in the bay itself. Complying with the demands, the Lighthouse Board successfully petitioned Congress in 1854 for funds to construct a light on the southern tip of Halfmoon Reef, a shoal on the eastern side of Matagorda Bay. Two years passed before the plans, which called for the construction of a screwpile lighthouse, were finalized. The lighthouse would consist of a wooden, hexagonal structure, sixteen feet on a side, surmounted by a lantern room and supported by seven, twenty-five-foot iron piles. On one end, the piles had threads, two feet in diameter, which facilitated screwing the piles into the shoal to a depth of nine feet.

The piles arrived at Matagorda Bay early in 1858, having been shipped to Galveston from Baltimore aboard the same vessel that carried the cast iron extensions for the Matagorda and Bolivar Point Lighthouses. Halfmoon Reef Lighthouse was completed by July 1, when it began operation. A fixed white light produced by a sixth-order Fresnel lens shone from the lantern room. However, mariners claimed that as they sailed in the gulf along the Matagorda Peninsula dunes would periodically obscure Halfmoon Reef Light, creating a flashing signature like that of the nearby Matagorda Island Lighthouse. To eliminate the confusion, a ruby red glass chimney was used in the oil lamp, changing the characteristic of Halfmoon Reef Light to red.

The stations light was extinguished during the Civil War, but unlike other Texas lighthouses, Halfmoon Reef Lighthouse was not dismantled or damaged during the conflict. Although the war ended in 1865, the lighthouse did not return to service until February 20, 1868, as the reestablishment of coastal lights and those marking major ports took precedence over bay lights.

Surrounded by water, the lighthouse was an isolated island for its keepers. Perhaps that was why twice the lighthouse had the unique distinction of having a keeper and an assistant who were husband and wife. A few children were raised at the lighthouse, but the fear of having a child unknowingly fall into the water, prompted several wives to keep a residence on land. One keeper, Stephen Hill, had a daughter named Sadie who was prone to sleepwalking. After Sadie had been discovered taking a nighttime stroll dangerously near the edge of the lighthouse, her parents decided that something had to be done. Their solution was to tie a string between Sadies big toe and her sisters big toe each night before retiring. The string brought an end to Sadies nocturnal adventures, though probably at the expense of several sound nights of sleep for her sister.

Halfmoon Reef Lighthouse suffered little damage in the 1875 hurricane that devastated Indianola and destroyed the East Shoal and West Shoal screwpile lighthouses at the entrance to Pass Cavallo, killing all four of their keepers. The hurricane of 1886 caused moderate damage to the lighthouse, and as traffic in Matagorda Bay had declined, the Lighthouse Board decided to discontinue the light, rather than make the necessary repairs. Fortunately, the lighthouse was retained as a daymark, for when vessel traffic to and from Port Lavaca experienced an increase around the turn of the century, the light was returned to service in 1902, but before this could be done extensive renovations were necessary. All the metalwork was scaled and painted. All the woodwork was renewed. A new galvanized iron roof was put on the lighthouse. An oil room with a brick floor was built along with a storeroom and coal room, and a new landing ladder was put up along with a hoist for hauling up coal and provisions. A fixed, fourth-order lens was used to produce a red light that went into service on September 15, 1902. A few years later, the lens was replaced by a more modest lens lantern.

In 1911, a schooner arrived at the lighthouse loaded with construction materials. Over the next several days, a work crew lived aboard the schooner while they added a roof with a steeper pitch to the lighthouse. This modification, carried out to address persistent leaks reported at the station, can be noted by comparing the top two historical pictures on this page.

Milton Broussard was born at Halfmoon Reef Lighthouse on November 5, 1914, when his father was serving as keeper. Milton was the fifth child of Albert and Ellen Broussard, but tragically Ellen passed away from pneumonia nine months after Miltons birth. Milton gave up lightkeeping after Ellens death, and the four older children were placed in orphanages while Milton was raised by relatives in Port Arthur. The children later reunited, and what little information Milton knows about the lighthouse comes from his older siblings. A veteran of World War II, Milton has visited his birthplace on multiple occasions and celebrated his 100th birthday in 2014.

A powerful hurricane struck the Texas coast in September 1919, killing 284 people in Corpus Christi. At Palacios and Port Lavaca, wharves, fish houses, and boats received heavy damage. Assistant Keeper Archie Fox was trapped on Halfmoon Reef Lighthouse during the event, and despite the structure being severely damaged by the storm, he faithfully maintained the light.

The following story, entitled Disappearance of Keeper of Lighthouse on Half Moon Reef in Bay Mystifies Texans, appeared in the December 27, 1934 edition of the Daily Tribune.

PALACIOS, Dec. 27.A baffling mystery of the sea Wednesday night confronted officers of this Gulf coast town as they searched for H. O. Welch, 36, keeper of the light on forlorn Half Moon Reefa desolate rocky place in the bay.

Welch was last seen when boatmen took him to the crescent-shaped reef on Friday, December 13. That night he made his last entry in the lighthouse log. It read:

Three days later when the alternate lightkeeper went to relieve Welch the beacon was darkened and there was no trace of Welch on the barren reef.

The missing lightkeepers watch, money and personal effects were inside the lighthouse. Apparently, investigators said, Welch had prepared for bed but did not retire for the bed bore no evidence of having been in use.

The beacon light had consumed the oil and wick and was extinguished when relief reached the reef. Authorities said the light was an old fashioned type that burned for 24 hours without refilling.

Half Moon Reef is two miles from the mainland and a strong undertow swirls around the tiny, desolate spot. Because of the undertow, officers said, it would have been practically impossible for Welch to swim to the mainland if he had sought to do so. Welch was marooned on the reef without a boat.

Coast guardsman and aviators Wednesday searched the marsh-like mainland for miles in quest of the missing lightkeeper.

Earl R. Allen of Palacios, brother of the missing man and other relatives have kept a vigil along the shore for the lightkeeper.

I cant understand it, Allen told friends. He seems to have just vanished from the reef.

A follow-up story, printed two days later, announced that the keepers body had washed ashore near Port OConnor, twelve miles from Halfmoon Reef. Authorities ruled it an accidental death, believing Welch must have fallen from the lighthouse and drowned. In 1935, the position of assistant keeper was eliminated and not long thereafter an eight-day lantern was installed in the lighthouse, permitting the remaining keeper, Mike Nelson, to live ashore. Besides calling at the lighthouse once a week or so, the keeper was given the additional responsibility for several other lighted beacons on the bay.

Given its exposed location, the lighthouse managed to weather several violent storms remarkably well. However, in 1942, its luck changed, when a hurricane tore the walkway from the lighthouse and left it sagging on its pilings. The Coast Guard decided to sell the structure rather than repair it. Bill Bauer and Henry Smith purchased the lighthouse, which they planned to use as quarters for the night watchman at their Point Comfort dredging business. Bill Bauer frequently visited the lighthouse as a boy with his father, who would transport shellfish harvested by local fishermen from the station to shore.

Aboard a 124-foot barge with a lifting crane and 34-foot steel beams, Henry Smith and a work crew set out to retrieve the lighthouse in 1943. As they were preparing the lighthouse for the move, military personnel arrived in a motorboat and ordered them to leave the area before the planned bombing practice set to begin in a half hour. The movers, however, were not willing to leave the lighthouse, and the bombing had to be delayed while the structure was salvaged.

In the early 1960s, Pat Riojas II was a truck driver for Bauer Dredging, and he and his family actually lived in the lighthouse, located just inside the Bauer fence line.

In 1978, thirty-six years after purchasing the lighthouse, Bauer donated it to the Calhoun County Historical Commission for use as a museum and supplied a sizable trust fund for maintaining the structure. The lighthouse was transported across the Matagorda Causeway, and then restored the following year as Michael C. Crains Eagle Scout service project. In 1985, the lighthouse was placed atop its present piers, the encompassing porch was added, three flag poles were erected, and a Texas Historical Marker was unveiled at the site by Mr. and Mrs. Bauer, the generous donors of the lighthouse and the namesakes of the nearby community center. Today, the lighthouse sits alongside Highway 35, adjacent to Port Lavacas Bauer Community Center.

For a larger map of Halfmoon Reef Lighthouse, click the lighthouse in the above map.

The lighthouse is owned by the Calhoun County Historical Society. Grounds/tower open.

During a return trip to the Halfmoon Reef Lighthouse in 2007, we noted that the shutters on the lighthouse appeared to be painted shut and that no flags were flying. We inquired about the flags and were told that the cables in the poles were damaged, and a crane was needed to make the repairs. Hopefully, this repair work can be funded soon, and the shutters can be reopened. I think anyone would agree that the older pictures above present the lighthouse in a more favorable manner.


Cute, just too darn cute and the day was amazing. Good historical photographs inside.