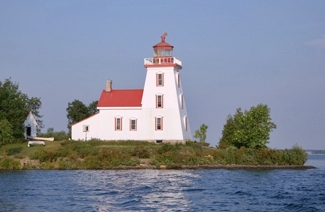 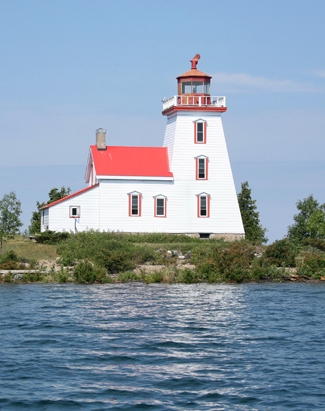 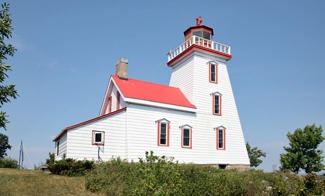 Strawberry Island lies just west of the northernmost section of Manitoulin Island and its town of Little Current. Vessels using the protected North Channel to sail between Georgian Bay and Lake Superior need to follow an intricate channel that winds between numerous islands. In December 1878, P.M. Campbell, master of the Northern Queen, sent a chart of Lake Huron to the government with red dots indicating where additional lighthouses were needed. The lights most required at present, Campbell wrote, are Cape Robert, Strawberry Island, Papoose Island and Cabots Head. Parliament allocated $1,500 for a lighthouse on Strawberry Island in April 1880, and shortly thereafter tenders were invited for its construction.

The Department of Marine provided the following description of the lighthouse in its report for 1881:

A new lighthouse upon the northernmost point of Strawberry Island, off the north coast of the Great Manitoulin Island, Georgian Bay, was satisfactorily completed and put in operation in September last. A fixed white catoptric light is shown, elevated 40 feet above water mark, and should be visible 11 miles from all points seaward. The building consists of a square wooden tower, 44 feet high, with keeper's dwelling attached.

Charles Taylor was paid $1,545 to construct the lighthouse and E. Chanteloup received $624.70 for the lantern and lighting apparatus. Bryan McKay was appointed the first keeper of at an annual salary of $300, and he would serve five years in this capacity, before William McKenzie, the longest-serving keeper of Strawberry Island Lighthouse, took charge in 1886 at the age of thirty-five. Keeper McKenzie and his wife Mary Jane raised seven children on the island. The family would cross over to Strawberry Island by sleigh in March before the ice melted and leave in October.

In June 1915, the fixed white light shown from Strawberry Island Lighthouse was improved by substituting a fourth-order lens for the lamp and reflector formerly used in the lantern room.

Since the lighthouse lost its last resident keeper in the late 1960s, the property has been leased as a summer cottage. Today, the light atop the tower is solar powered, but the dwelling has no electricity or running water.

In 2006, Strawberry Island Lighthouse was declared a Recognized Federal Heritage Building. The following is a portion of the justification for recognizing the building and explains why the lighthouse seems to catch the eye of many a passing sailor:

Its very good aesthetic design, very good functional design, and its good quality craftsmanship and materials, as manifested in:

For a larger map of Strawberry Island Lighthouse, click the lighthouse in the above map.

Strawberry Island Lighthouse is best seen by boat, though a distant view is possible from Little Current. I visited the lighthouse with Gary Green out of Little Current. He can be reached at (705) 368-2538.

A lens used at Strawberry Island Lighthouse is on display at William Purvis Marine Museum, which is the third floor of Gore Bay Harbour Centre.


During my visit to Manitoulin Island in 2014, I read in the island's travel guide that the lens from Strawberry Island Lighthouse was on display at the visitor centre in Little Current. Excited at this news, I stopped in only to find that the lens was no longer there and that nobody knew what happened to it. I thought a logical place for the lens was a museum, and a person on the street kindly told me that the nearest one was the Centennial Museum of Sheguiandah. Though it was a bit out of the way, I drove there and found out that the lens had indeed been there, but the owner came and retrieved it after it had been transferred from the visitor centre to the museum without his permission. The lady at the museum did not have any contact information for the owner of the lens, but I eventually learned that the lens is on display at the William Purvis Marine Museum, which is the third floor of the Gore Bay Harbour Centre.