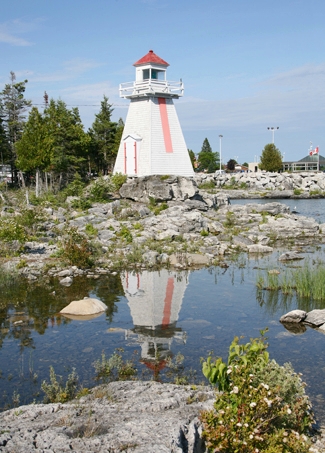 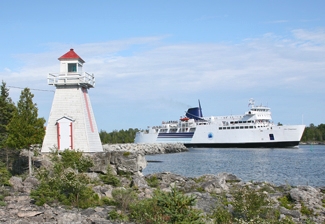 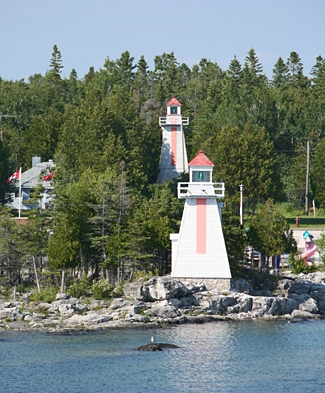 The range lights at South Baymouth welcome thousands of visitors to Manitoulin Island each year as they arrive from Tobermory aboard the Chi-Cheemaun ferry. Chi-Cheemaun means big canoe, and the ferry with this name has been in use since 1974. Regular ferry service between South Baymouth and Tobermory was initiated in 1932, when the Owen Sound Transportation Company was granted an exclusive government contract, and helped many tourists discover Manitoulin Island.

The early inhabitants of Manitoulin Island called the community at the entrance to South Bay Sagradawawong, meaning The Outlet, and the current name of South Baymouth continues to indicate the strategic location of the village. The first Europeans to settle at South Baymouth were fishermen James Ritchie and Val Wilman, who relocated from nearby Walkers Point in the 1870s, and the villages first public building was a church built in 1889 that doubled as a school and served both Anglican and Presbyterian congregations. The fishermen at South Baymouth salted their catch and shipped it out of Kilarney to the Buffalo Fish Company until 1879, when the company started to market fresh fish and contracted with Ritchie and Wilman to build a dock and icehouse at South Baymouth. As the settlement at Michaels Bay declined, South Baymouth became the main port on the Manitou Islands south shore.

The Department of Marine established a pair of range lights at South Baymouth in 1898 and provided the following description of them in its annual report of that year:

Two range lights were built and put in operation in September last at South Baymouth, to lead into the entrance to South Bay or Manitoulin Gulf, on the south-east shore of Manitoulin Island, replacing temporary pole lights privately maintained since September, 1897, by Capt. A. Macauley, master of the steamer J. H. Jones.

The front range light building stands upon the south-east end of a bare limestone island lying on the north side of the mouth of the bay, and is a square wooden tower, with sloping sides, surmounted by a square wooden lantern, the whole painted white. The tower is 28 feet high from the ground to the vane of the lantern.

The light is a fixed white light, elevated 28 feet above the level of the lake, and visible ten miles from all points of approach by water. The illuminating apparatus is dioptric, of the seventh order.

The back range light building stands upon the main land of Manitoulin Island, in the woods behind the village of South Baymouth, 772 feet N. 28° E. from the front tower. It is similar to the front tower, but is 40 feet high. The light is a fixed white catoptric light, elevated 46 feet above the level of the lake, and should be visible twelve miles in, and over a small arc on each side of the line of range.

The work of construction was done by Mr. J. Candlish Kennedy, of Owen Sound, whose contract price was $927. The total expenditure in connection with the construction and establishment of this station is $1,067.09.

James Ritchie tended the range lights from 1898 to 1903, when John A. Ritchie, his cousin, took charge of the lights. As John A. Ritchie grew older, his daughter Pearl helped care for the range lights, and after she married Henry B. Chisholm, he became the official keeper. As a veteran of World War I and now a relative of the former keeper, Chisholm was a shoe-in for the job.

Henry Chisholm enlisted with the 119th Battalion in 1916 at the age of twenty-one and was injured in France while serving as an engineer with the Canadian Expeditionary Forces. Henry was awarded the Military Medal for Bravery and returned to South Baymouth following the Armistice. After Henrys death in February 1958, his brother-in-law Leonard Leeson cared for the range lights until they were automated.

In 2012, Dave Thompson, a self-described eBay sniper, notified the Tekummah Township that Henry Chisholms World War I medal was being sold on the online auction site. This fact was advertised in The Manitoulin Expositer, and the community was able to raise enough funds to allow Thompson, who has made a hobby out of repatriating war medals to families and communities, to purchase the medal from a seller in Indiana for $735. Visitors to South Baymouth can now view the medal at the Little Schoolhouse and Museum.

For a larger map of South Baymouth Range Front Lighthouse, click the lighthouse in the above map.

South Baymouth is the northern terminus of the car ferry that carries passengers between Manitoulin Island and Bruce Peninsula. The lighthouse can be seen from the ferry or by taking Water Street in South Baymouth just beyond the marina and following a boardwalk down to the rocky beach.