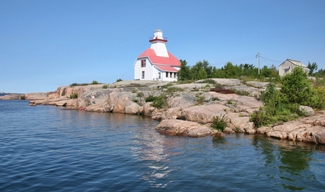 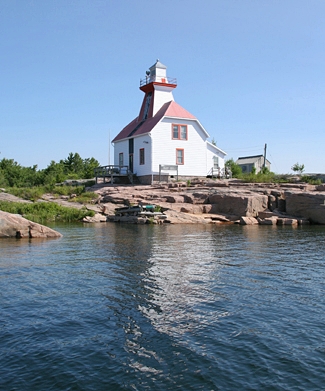 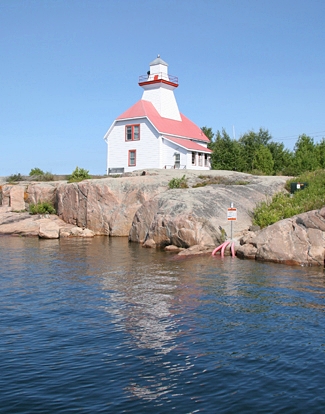 During 1891, Staff Commander John G. Boulton of the Royal Navy conducted a detailed survey of the various channels leading to Parry Sound using two open boats for shallow water sounding and his large vessel for deep water sounding. The following is an excerpt from Boultons report in which he recommended the establishment of five new lights to help mariners safely sail from Red Rock Lighthouse to the Town of Parry Sound:

This section is the most broken up portion of the whole north-east coast of Georgian Bay, there being upwards of 4,000 islands and dry rocksThere are four channels leading to Parry Sound, the deepest and most direct approach from the westward being that close south of Red Rock lighthouse. With the usual characteristics of North Shore water, there are many dangers in all these passages, and additional aids to navigation are required before Parry Sound can be safely navigated by vessels of large draught. The only lighthouse at present in the approach to Parry Sound is that on Red Rock, the southernmost islet of the string called on the old chart the Indian islands. This light is very valuable, not merely as a local light, but for general coastal purposes also. But to render the Sound navigable at night, there would be required in addition to this light, five other lights to serve as ranges.

The sites of the centres of those proposed lighthouses, are marked by lead run into holes drilled into the rocks, close by which are broad arrows. Small beacons are erected over these marks.

To reach Parry Sound, mariners would pass south of Red Rock Lighthouse and then align their vessel with Snug Island Range. Once Jones Island Range was brought into alignment off their starboard side, vessels would follow this second range until they were a quarter-mile from Gordon Rock, at which point they would steer toward the light on Hugh Rock.

Charles Mickler of Collingwood, who had built the Pointe au Baril Range Lights in 1889, was awarded a $3,165 contract to erect the five lights, and he carried out the work during the 1893 season. When unsatisfactory reports were received from the local inspector, C.F. Cox, an Assistant Engineer for the Department of Marine, was sent from Ottawa to investigate the matter. Cox reported so many defects in the work that the Department refused to accept the lighthouses or pay for them until the work was made satisfactory.

As it was too late in the season to effect the repairs, the work was postponed until the following spring. A final inspection of the lighthouses made after Mickler claimed to have fixed the lighthouses found that the buildings were still far from being in compliance with the original specifications. The harsh winter weather had revealed additional defects in the buildings, and rather than trust the work to Mickler, the Department of Marine had W.H. Noble, its foreman of works, complete the project. Noble had to re-shingle the roofs, redo the siding on the walls, and renew the cornices before the lighthouses were finally weatherproof. This additional work cost $647.40, which was charged against the contract price.

1. Walton Island Light.This light is located on the westernmost Walton Island, and is the front light of a pair known as the Snug Harbour Range. The light is a fixed red catoptric light, elevated 39 feet above the level of the bay, and should be visible 7 miles in, and over a small arc on each side of the line of range. The tower is a square pyramidal wooden building, surmounted by a wooden lantern. It is 29 feet from the ground to the vane on the lantern, and is painted white, with a red stripe 3 feet wide on the side facing the channel.

2. Snug Harbour Light.The second light is built on the south extremity of an island on the north side of the entrance to Snug Harbour, and is distant 3,100 feet E. by N. 1/4 N. from the first described. The light is a fixed white catoptric light, elevated 62 feet above the level of the bay, and should be visible 13 miles in, and over a small arc on each side of, the line of range. The building is of wood, and consists of a square pyramidal tower, rising from the roof of a rectangular dwelling house, surmounted by a wooden lantern. It is 50 feet in height from the ground to the vane on the lantern, and is painted white with a red stripe 3 feet wide on the middle of the side facing the channel.

The two lights in one lead in E. by N. 1/4 N., south of Seguin Bank through the Main Channel to the intersection with the Jones Island Range.

For the opening of the 1902 navigation season, Snug Harbour Range Lighthouses were painted solid white, including the roofs of the lantern rooms and dwellings, to make them more conspicuous against their typically dark backgrounds. A variety of color schemes were later tried on the rear lighthouse to increase its visibility. In 1934, the rear light was described as a black dwelling with white and black stripes. In 1961, its daymark was changed to a white square tower on yellow house with black vertical stripe, and it 1964, something that resembles the current coloring was established: an orange daymark with black vertical stripe. The tower currently used for the front light is of modern origin.

Starting in 1908, Adam Brown, the long-serving keeper of nearby Red Rock Lighthouse, was also listed as keeper of Snug Harbour Range, but this changed in 1930 with the hiring of Dan Boterell to look after the range lights. Keeper Boterell came up with a couple of clever schemes to reduce his workload. He placed a mirror in the lantern room which reflected the light down into the dwelling so he could tell if the light was lit without climbing the tower, and he rigged up a snuffer that would extinguish the light in the morning with just a pull of a string.

On June 7, 1915, the characteristic of the front light was changed from fixed red to fixed white, and on August 24, 1915, a new illuminating apparatus was installed in the rear light. The range lights were changed to their present fixed green characteristic in 1959.

The Snug Harbour Rear Range Lighttower is a good example of a distinctive variation of combined dwelling and lighttower in a single compact building, a type used most frequently in minor coasted lights in remote locations. It is notable for its vernacular qualities, its balanced composition and good proportions, its tapered tower rising from the centre of the roof, and its distinctive day marker.

For a larger map of Snug Harbour Range Rear Lighthouse, click the lighthouse in the above map.


There is still a front range light associated with the rear tower at Snug Harbour. It isn't much to look at, but here is a picture of it.