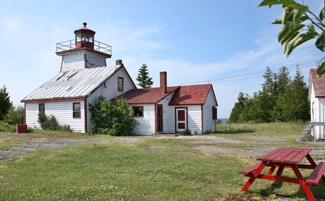 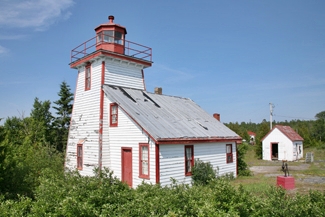 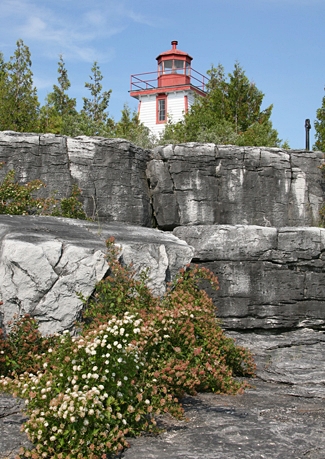 The North Channel, which runs between the Canadian mainland and several offshore islands including Manitoulin Island, Cockburn Island, Drummond Island, and St. Joseph Island, offers mariners a more protected route than sailing the open waters of Lake Huron. This protection comes at price though, as numerous rocks and ledges make the North Channel a bit circuitous and dangerous. The North Channel is often entered at Badgeley Island to the east or St. Joseph Island to the west, but a popular southern entrance is Mississagi Strait, which lies between the western end of Manitoulin Island and Cockburn Island. The 1855 contract that resulted in the construction of Lake Hurons six Imperial Towers also called for lighthouses on Badgeley Island, St. Joseph Island, and at Mississagi Strait to mark the North Channel, but the unexpected expense of building the six stone towers postponed the erection of lights along the North Channel.

Mississagi Strait Lighthouse, known earlier as Manitoulin Lighthouse, was finally erected in 1873, and the following description of the new light was published by the Department of Marine at the close of that year:

A new lighthouse was also erected last summer on the south-west end of Great Manitoulin Island, Lake Huron, for the purpose of general navigation, and to guide vessels through Mississaga Straits. The light is a fixed white catoptric light, consisting of two mammoth flat-wick lamps, with 20-inch reflectors, and one circular burner lamp, with 20-inch reflectors, and can be seen at a distance of about 15 miles. Mr. John Miller was appointed keeper of the light, at a salary of $300 per annum, and the light was first exhibited on the 12th day of August last. The total cost of its construction, up to the 31st December last, was $2,073.10.

The lighthouse consists of a square tower surmounted by a lantern room and attached to one corner of a one-and-a-half-storey keepers dwelling. The tower stands twenty-eight feet tall, from its base to the weather vane atop its lantern room, but the light has a focal plane of forty-six feet about the straits thanks to the rocky bluffs on which the lighthouse was built.

Keeper John Miller, who had a family of four children, lived at the light for just over four years before resigning in November 1877. During this time, Keeper Miller would cut wood in his spare time and haul it to the stations wharf by ox team where he would sell it to passing steamers for fifty cents a cord.

William Cullis replaced Miller as keeper, and he too had a family of four children. When Darius Smith, the Superintendent of Lights above Montreal, visited the station in 1878, he noted that Cullis kept the lighthouse and dwelling in very good order and that the kitchen was being replastered at the time, as the old plaster, having no hair mixed in its lime, had fallen off. Since he had no means of procuring supplies, Keeper Cullis had purchased a twenty-seven-and-a-half-foot sailboat and was desirous that the Department of Marine reimburse him. To improve access to the station, Keeper Cullis offered a ten dollar prize to the first person to cut a trail through the brush and reach the lighthouse with a team. A Mr. Robinson, who homesteaded at Bass Lake Camps, broke through with a team of oxen and claimed the reward.

A steam fog signal commenced operation at the station on October 10, 1881, sounding a ten-second blast each minute, during fog and snowstorms. After mariners complained that the fog alarm was unsatisfactory, the Department of Marine replaced the original horn with a steam whistle, commonly known as a wildcat. Fitted with a piston to change the tone of its blast, this new whistle began with a low note, rose to a screech, and then returned to a low note, providing a whole range of frequencies that were more likely to reach the mariner. Vessel masters reported the new change gave complete satisfaction. The fog-alarm building stood sixty-five feet southwest of the lighthouse, and in 1897 it was enlarged to accommodate a duplicate locomotive boiler, built by John Inglis & Sons of Toronto.

On November 1, 1906, the stations fog alarm was changed from the wildcat whistle to a diaphone operated by air compressed by steam power. The Canadian Fog Signal Company supplied the diaphone plant for $5,747, and it was installed inside a new fog alarm building erected 125 feet south of the lighthouse at a cost of $4,893. Elevated thirty-three feet above the water, the diaphones resonator gave a pair of three-second blasts every forty-five seconds. In 1916, a class D oil plant replaced the steam plant used to provide the necessary compressed air.

The fog alarm wasnt the only equipment to improve over time, as a fourth-order French lens replaced the lantern rooms array of lamps and reflectors in 1908. The previous year, the upper portion of the lighthouse tower was entirely renewed, and the dwelling was repaired and painted.

During the summer of 1910, a great fire burned much of the land along the southern shore of Manitoulin Island. The resulting smoke was so thick that fishermen attached cowbells to their buoys so they could find them. Keeper Ball was forced to run the fog alarm so much during the fire that he ran out of coal and had to purchase some from passing steamers. Besides taking care of the light, Keeper Ball also served as a local dentist. He reportedly was never without a pair of forceps and would gladly extract a decayed tooth.

A telephone line reached Mississagi Lighthouse in 1918 and proved to be a lifesaver for Keeper William Grant, who was in charge of the station from 1913 until 1946. Kinzie Grant, who served as his fathers assistant, related the following story:

My dad liked to carve. He carved a miniature Lighthouse and a miniature Griffon (the ship was carved out of the beams of the Griffon Shipwreck). One day after a big storm my dad ran out of wood to carve so he went down over the rocks to the boathouse that used to be in the cove by the cottage. As he went down over the rocks his boots slipped and he fell. Unfortunately he hadnt put his jackknife away and he fell on it. The blade entered his chest between his ribs. He pulled out the blade but could not stop the blood from flowing. He soon became too weak to shovel the coal needed to stoke the boilers to make the steam for the foghorn. He called me at school the next day and I ran the 8 miles to the lighthouse because he refused to go to a doctor until he got the foghorn to blow. The steam was so low by now that it would take hours to get it back up. I think my dad was prepared to dieI was determined that he wouldnt die and I shoveled coal for hours without a break and it worked. The steam started to rise and I blew the horn about 4 hours later, then got my dad to the doctor. The Doc said he wouldnt have lived through the night because he lost too much blood.

D.N. Sullivan, a veteran of World War II, was placed in charge of the lighthouse in 1946 and served until electricity reached the station in 1970, allowing it to be automated. Keeper Sullivan originally had to hike the eight miles between Meldrum Bay and the lighthouse, but by the late 1940s, he had improved the road enough that he could use his Model A to drive to and from the station. When my mother and I would visit the lighthouse before Mr. Sullivan fixed the road, Emily Falls recalled, we would ride up as far as the quarry and would leave the horses to graze. We would then wade in rubber boots through the swamp and brush fighting the mosquitoes until we came upon the flat rock and the beautiful breeze of the strait.

Following automation, the stations buildings were leased privately for a while before being leased to the Meldrum Bay Historical Society in 1983 so they could turn the lighthouse into a museum. The Manitoulin Tourism Association took over the lease the following year, and have since employed local families to staff a museum and restaurant at the site. For those wishing to spend even more time at the lighthouse, campsites are available nearby.

For a larger map of Mississagi Strait Lighthouse, click the lighthouse in the above map.

Take ON-540 to the western end of Manitoulin Island and just before reaching Meldrum Bay, turn left onto Mississagi Lighthouse Road and continue for 8 km (5 miles) to just before Lafarge Quarry, where you will turn left through a gate and drive 6.8 km (4.3 miles) to the lighthouse. Mississagi Lighthouse is home to a museum that has been open from Victoria Day Weekend through the third Saturday in September. The nearby foghorn building was home to a restaurant with the same hours as the lighthouse (8 a.m. to 8 p.m.).

The lighthouse is owned by the Coast Guard and managed by Manitoulin Tourism Association. Ground open, lighthouse open in season.


The lighthouse was sadly in a bit of a dilapidated condition during my visit in 2014 - the roof required some obvious attention and all structures needed a fresh coat of paint. I had dinner in the fog signal building to lend some support to the effort to maintain the place and really enjoyed the meal. A month after my trip to Manitoulin Island, I read that the Manitoulin Tourism Association was seeking someone to run the lighthouse, so hopefully the needed help will be coming soon.

This metal tower that formerly held the light was lying beside the road that leads to the lighthouse.