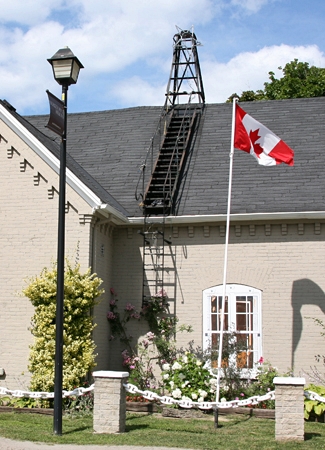 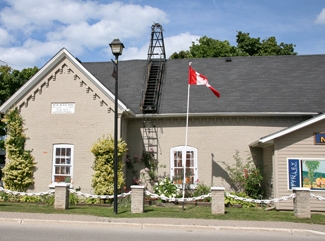 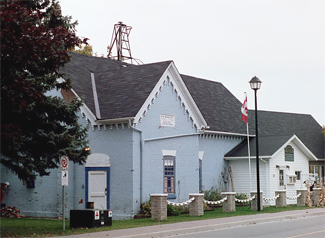 Situated at the mouth of the Big Head River, Meaford traces its roots to 1835 when surveyor Charles Rankin reserved 200 acres for a community on the southern shore of Georgian Bay. Meaford had a population of 1,700 when it was incorporated in 1874 and soon boasted several mills, a couple of foundries, and multiple stores.

In 1855, the government of the Province of Canada appropriated £1,000 for a pier at Meaford to go along with a similar amount raised by the municipality through taxation. The pier was built in 1856, and the following year another £1,000 was provided to extend the pier to create a proper harbor.

The Department of Marine placed a small pole at the end of the pier in 1877 and paid Samuel Dutcher an annual salary of $75 to hoist a tin lamp, having one mammoth flat-wick lamp set in an eight-inch reflector, up the pole each evening. After parliament provided $1,500 for a formal lighthouse at Meaford, the Law Building and Manufacturing Company of Meaford was paid $875 to replace the pole light in 1878 with a square, wooden tower that exhibited a fixed white light at a height of forty-two feet above the water.

On May 1, 1903, the illuminant used in the breakwater lighthouse on the west side of the entrance to the harbour was changed from kerosene to electricity. At the opening of navigation in 1914, a new square, pyramidal, skeletal tower, with a small shed at its base, commenced operation on the breakwater.

Keeper Samuel Dutcher was born in 1830 in the Township of York, twenty-five miles north of Toronto, and didnt arrive in Meaford until 1872. Dutcher looked after the breakwater light for nearly fifty years and was still in charge of it when he passed away in 1925 in his ninety-fifth year, though by then the light required little care. According to Dutchers obituary, captains when coming from Owen Sound would say: You can see that light 12 miles away, and would then remark, Thats Dutchers light.

In 1952, a steel skeletal tower topped by a light was bolted atop the roof of the brick pumphouse in Meaford to serve as a rear range light to the skeletal tower situated on the west end of a breakwater extension in the harbour. The rear light displayed a fixed red light at a focal plane of thirty-four feet, while the front light exhibited a flashing green light at a height of twenty feet. The range lights were discontinued in 1988, when the front light and breakwater extension were removed during a reconfiguration of the harbour.

The pumphouse, which was built in 1895 and originally delivered water to thirty-three hydrants in Meaford through a four-mile-long network of pipes, is now home to the Meaford Museum.

For a larger map of Meaford Range Rear Lighthouse, click the lighthouse in the above map.

From ON-26 (N Sykes Street) in Meaford, turn east onto Collingwood Street and you will run into Meaford Museum after a block.