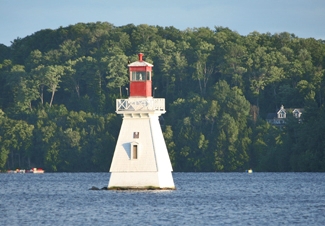 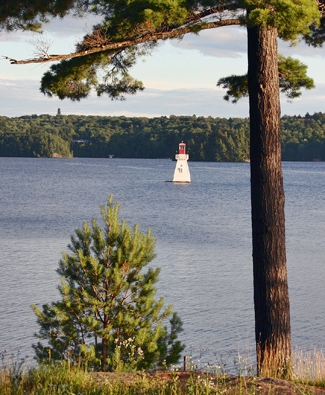 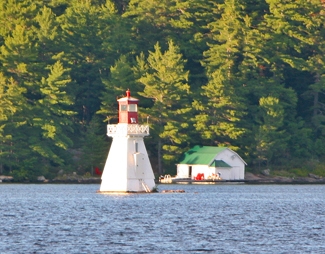 The Muskoka Lakes are three interconnected lakes  Muskoka, Rosseau, and Joseph. While Lake Muskoka is believed to be named for Mesqua Ukee, an Ojibwa chief whose name means not easily turned back in the day of battle, Lake Rosseau and Lake Joseph take their name from Joseph Rosseau.

As its rocky terrain was not well suited for agriculture, the area around the lakes didnt see significant development until it was opened to logging in the 1860s. Alexander Cockburn launched Lake Muskokas first steamship in 1866. Known as the Wenonah, Ojibwa for first daughter, the vessel was limited to travel on Lake Muskoka until 1871 when the government built locks at Port Carling, allowing ships to travel between Lake Muskoka and Lake Rousseau, and dredged a channel between Lake Rosseau and Lake Joseph.

Access to the area took another leap forward when the Toronto, Simcoe, and Muskoka Junction Railway Company was incorporated in 1869 to extend a line to Gravenhurst, situated on the southern shore of Lake Muskoka. The endeavor was hampered by rugged terrain and financial difficulties, but the line was finally completed in 1875, when it was absorbed into the Northern Railway.

With tourists now having access to the lakes through train and steamboat service, several resort hotels, including Royal Muskoka, Windmere, Rosseau, and Beaumaris, sprang up on the rocky shores. To help vessels avoid a treacherous shoal in the northern reaches of Lake Rosseau, the Department of Marine had a lighthouse built atop the hazard and published the following description of it in 1890:

A small lighthouse erected during the past season on Ditchburns Shoal, in Lake Rosseau, about a mile southwardly from Rosseau, in the District of Muskoka, was put in operation on the 25th September last.

The light is fixed white, elevated 28 feet above the level of the lake, and should be visible 8 miles from all points of approach. The illuminating apparatus is dioptric, of small size.

The lighthouse, which stands upon a small cribwork pier, is a square wooden tower painted white, surmounted by an iron lantern painted red. It is 26 feet high from the pier to the ventilator on the lantern.

The work was done under contract by Mr. John Haw, of Bracebridge, the contract price being $475.

The total expenditure in connection with the establishment of this light has been $539.16.

Joseph Gibson Dixon was hired as the first keeper of the light on August 21, 1890, and he looked after it for the next twenty-seven years, until his daughter Florence took charge of the lighthouse in 1917 and he became keeper of the Jones Island Range in Parry Sound. After two years on Jones Island, Keeper Dixon served as Keeper of Western Islands Lighthouse from 1919 to 1925.

Seguin Township submitted a business plan to the federal government in 2013 as part of their application to assume ownership of Rosseau Lighthouse under the Heritage Lighthouse Protection Act. Lake Rosseau North Association agreed to restore the deteriorated lighthouse, with the township being responsible for future maintenance.

The thought of just having this old historic monument, that was built in 1890 become demolished, and a pole and a light stuck in instead was very upsetting to a lot of people, said Anita Wood, president of Lake Rosseau North Association, thats why we banded together to try and preserve it.

The association hosted a Lighthouse Rocks! Gala on July 27, 2013 and raised $25,000 for restoration of the lighthouse. The community and township were granted permission from the Coast Guard to start renovations, and work on the tower began during the winter of 2013 - 2014. The work was completed in 2014, and the tower was transferred to Seguin Township that year.

For a larger map of Rosseau (Lighthouse Shoal) Lighthouse, click the lighthouse in the above map.

Rosseau Lighthouse is best seen by boat, but a good view is possible from the grounds of Rosseau Lake College, located just south of Rosseau.