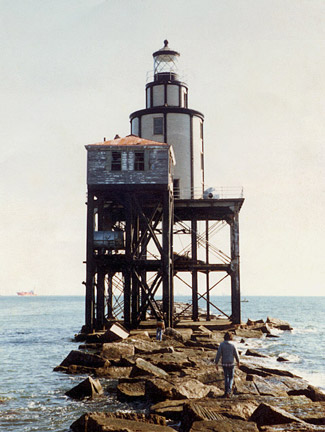 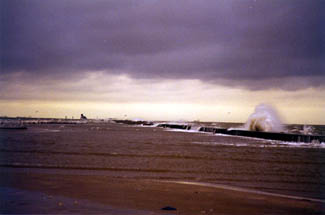 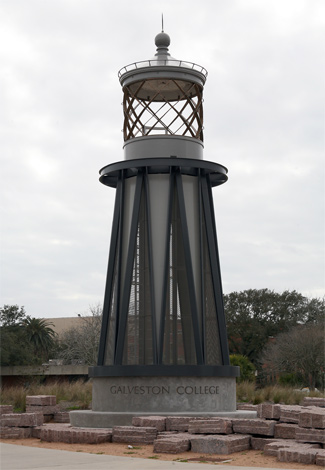 Galveston Bay has always been Texas busiest port, even though a sandbar at its entrance prevented deep-drafted vessels from entering the bay during the 1800s. To overcome this problem, the vessels cargo had to be lightered to port using barges or small boats, an expensive and time-consuming task. In 1874, U.S. Army engineers commenced work on two parallel jetties at the entrance to Galveston Bay. One jetty was connected to the eastern end of Galveston Island, while the other extended from the western tip of the Bolivar Peninsula. By concentrating the bays outflow into a relatively narrow space, sediment was carried farther out into the Gulf of Mexico, and a deep channel into the bay could be maintained. Construction on the jetties would continue into the twentieth century, but in the meantime temporary measures were taken to mark the growing, man-made obstacles. First, in 1883, a simple iron pole daymark was placed near the end of the south jetty. The following year, this was replaced with a more visible, twenty-six-foot iron spindle topped by an iron sphere.

In 1894, the Lighthouse Board began drawing up plans for a substantial lighthouse to mark the jetties and petitioning Congress for the necessary funds. A $35,000 appropriation was obtained on June 11, 1896, and a design was selected based on that used for Rebecca Shoal Lighthouse in Florida, which called for a wood-framed structure mounted on iron piles. However, when the powerful hurricane of 1900 destroyed a good portion of the buildings in Galveston, the plans were altered to provide a stouter superstructure built of iron and cement.

In 1898, a square wooden pyramidal structure, covered with horizontal slats on its four sides and mounted on four piles encased in cast-iron pipes, was built outside the north jetty to serve as a temporary light.

In 1904, with work on the jetties being finished, the firm of MacPherson, Willard and Company of Bordentown, New Jersey was contracted to supply the foundation piles for Galveston Jetty Lighthouse. The following spring, a working wharf, eight-two by eighty-three feet, was built and fifty-three of the huge capping stones used in constructing the jetties were removed to allow nine wrought-iron piles to be driven into the seabed near the end of the southern jetty. Once the piles were set, 200 tons of rock ballast were placed around them to rebuild that portion of the jetty.

As a lack of funds prevented completion of the lighthouse, an automatic gas beacon was installed atop a wooden structure mounted on four of the foundation piles to serve as a temporary light. Even after an additional $10,000 was secured in May 1908, the Lighthouse Board delayed the project over concern that the planned extension of the jetties would reduce the effectiveness of the lighthouse. Finally, late in 1912, the decision was made to proceed with construction atop the piles that had been set in place over seven years earlier, even though the lighthouse would now be located almost a thousand feet from the end of the jetty. Champion Iron Company of Kenton, Ohio supplied the ironwork for the lighthouse, and work on the site began in October 1914.

Metal beams were used to form the skelton of the lighthouse as well as the support platform that rose forty-two feet above the gulf waters. The bottom floor of the lighthouse contained the oil room and engine room. The second floor consisted of a kitchen, bedroom, and bathroom for the keepers, and two additional bedrooms were located in the third story. The diameter of the bottom three levels was twenty-three feet, four inches, while the upper two levels, the watchroom and lantern room, were somewhat smaller. The first layer of stucco applied to the structure contained cow hair that served as a bonding agent, while the outer layer included waterproofing material.

When the hurricane of 1915 struck the Galveston area, the tower was roughly fifty percent complete. The violent storm bent the struts in the foundation and washed away the construction wharf, but the upper portion of the lighthouse required only minor repairs. Materials such as lime, cement, and lumber were lost along with a pile driver, hoisting engine, and concrete mixer. On August 18, 1916, another hurricane swept away the replacement construction wharf, forcing the construction of yet another one the following year. In 1917, a forty-foot concrete block with a depth of ten to fifteen feet was placed around the foundation piles.

A third-order Fresnel lens, manufactured by the Parisian firm of Henry-Lepaute, arrived for installation in the tower during the latter part of 1917. Before making its way to Texas, the lens and lantern room had been exhibited by the Lighthouse Service in San Francisco as part of the 1915 Panama-Pacific International Exhibition. While the lens was in storage in Mobile, Alabama awaiting shipment to Galveston, a box containing part of the lens was swept away by a hurricane that struck on July 5, 1916. Ruby-colored panels of glass were placed over every other bulls-eye to produce a distinctive characteristic of alternating red and white flashes. An oil vapor lamp was first used inside the lens to produce a light with an intensity of 23,000 candlepower. Later, a 1,000 watt bulb was installed, raising the intensity to 230,000 candlepower and allowing the light to be seen from a distance of twenty miles.

The lighthouse was finished by June 1918, but a coastal blackout imposed by the military during World War I, delayed its activation. Finally, on November 12, 1918, one day after Germanys surrender and after fourteen years of on-and-off construction, the lamp was lit for the first time with George W. Bardwell serving as the first head keeper.

Over the years, various upgrades were made at the station. After Congress provided $6,500 on March 4, 1921, a compressed air diaphone went into service at the lighthouse the following December. A radiobeacon was added to the station in October 1925 to serve as an additional aid to mariners navigating in reduced visibility. In 1949, additional pilings were driven adjacent to the tower to support a new, one-story keepers dwelling.

Due to its isolation, Galveston Jetty Lighthouse was home to just the keepers needed to watch over the light and other equipment. Visits by families were occasionally authorized, including a Christmastime stay by the wife and three children of Keeper Earl K. Wakefield in 1931. When the family wanted to make a return visit in the summer of 1934, the request was denied as the Wakefields now had a fourth child, and the station was not considered safe for an infant of 18 months.

Keeper Wakefield was commended in 1938 after he and his first assistant launched the stations skiff and went to the assistance of the snapper boat Albatross, which had run onto the rocks near the station and sank at 9:30 p.m. on January 6. The keepers picked up the three fishermen from the Albatross, returned them to the station, and furnished them dry clothes and a meal. Wakefield fired off rockets to attract the attention of the Coast Guard, but when they didnt respond, the men were sent ashore the following morning on an inbound tanker.

The lighthouse was linked to commercial electricity in 1969, freeing the keepers from the task of minding the generators and leading to the automation of the station in 1972. In the early 1980s, modern lights were built just off the ends of the jetties, and the old jetty light was deactivated. Soon thereafter, the Fresnel lens was donated to the Galveston County Museum, where it serves as the museums premier artifact.

A violent storm struck the lighthouse on May 2, 2000, and the iron pilings, weakened by years of rust, gave way toppling the lighthouse into the water. Just six months before the storm hit, Jim Croft, a local businessman, had proposed moving Galveston Jetty Lighthouse to Galveston Island State Park and turning it into a museum.

On November 8, 2006 the lantern room, which had been removed before the collapse of the lighthouse, was dedicated as part of Beacon Square, a new front door for Galveston College whose vision is A Beacon of Light Guiding Lifelong Learning.

The ruins are located at the end of a jetty protruding into the Gulf of Mexico from the western side of the mouth of Galveston Bay.
Latitude: 29.32785, Longitude: -94.69274

For a larger map of Galveston Jetty Lighthouse, click the lighthouse in the above map.

The Fresnel lens used in the Galveston Jetty Lighthouse is on display at the museum in the old county courthouse at 722 21st Street. The lantern room can be seen on the campus of Galveston College at the intersection of 39th Street and Avenue Q.


And the light is where....??? Great big beach to enjoy. Drive on the beach to your heart's content because the beach is almost as big as crossing the state of Texas.