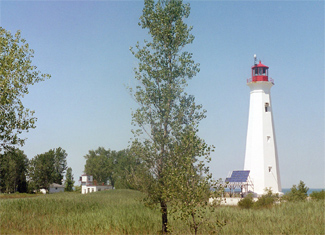 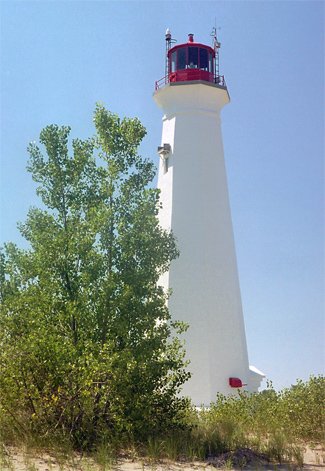 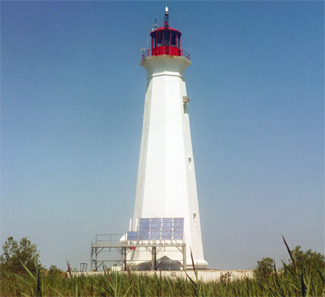 Long Point is a sand spit that extends roughly forty kilometres into Lake Erie, presenting a dangerous obstacle for mariners but also creating a protected bay on its northern side. In 1828, Elisha Whittlesey, a U.S. Representative from Ohio, wrote the following to Henry Clay, the U.S. Secretary of State, urging him to encourage the British to erect a lighthouse on Long Point or permit the United States to do so.

The navigating and commercial interests of Lake Erie sustain serious losses from the want of a light house on Long point, in Upper Canada. This point stretches so far into the lake that in violent storms vessels are unavoidably driven on to it in the night season  and not only property, but the lives of our mariners are lost. I understand last fall that four of our vessels were driven onto this point in one storm; that a part of them went to pieces, and that the hands on board of those wrecked, perished. If there was a light house at this place, the Point, so far form endangering the safety of vessels, would furnish the best harbour on that shore  and is many times run into for that purpose  when it can be discovered by day light. We have on our coast four light houses, which equally secure the British and our commerce and others are in contemplation.

The commerce on this lake is fast increasing, and has now become too important not to be protected by the adoption of such reasonable measures, as shall give to it greater security. The British Government must feel an increased desire when the Welland Canal shall be completed, to give ample protection to the commerce on the Lake, whether the same shall be carried on in their vessels or in ours.

In March 1829, the government of Upper Canada passed an act providing £ 1,000 and appointing three commissioners to facilitate the erection of Long Point Lighthouse. Brothers Joseph, Benjamin, and Whitney Van Norman, the lowest bidders, were contracted in 1829 to build the tower for £925, and Joseph and Benjamin Van Norman were selected the following year to construct a residence on the point as part of a £ 400 appropriation covering the dwelling, and oil and wicks for the lighthouse.

The specifications for the lighthouse called for it to be a circular, stone tower, reaching a height of fifty feet and having walls that tapered from five feet at the ground to two feet at the lantern. The tower was to stand upon a foundation of timbers sunk into the soil and then topped by two tiers of squared oak timbers laid crosswise. Twelve lamps and sixteen-inch reflectors were to be provided for the lantern room, which was to be topped by a lightning rod.

The lighthouse was sufficiently finished that it was lighted for the first time on the evening of November 3, 1830, but it wasnt completed until the following summer. Thomas Price, who had looked after the light in 1830, was appointed its first official keeper.

In 1832, the foundation of the lighthouse was already being damaged by the dashing of waves at its base. The north side of the point had worn away more than thirty yards since the lighthouse was built, with twenty yards being carried away during a storm in September 1831 and a few more yards being lost in November 1832. The brick keepers dwelling had fallen victim to erosion by 1836, and in 1838 the inspector general warned that the lighthouse was in imminent danger of collapsing. With its foundation undermined, Long Point Lighthouse was taken down either in 1838 or 1839, along with the remains of the dwelling, and moved farther inland, where the dwelling was rebuilt and the lighting apparatus from the tower was placed therein. Vandals later broke into the house and stole twelve reflectors, fifty gallons of oil, and roughly 300 pounds of iron.

In 1843, a new tower and keepers dwelling were built neat the tip of Long Point. Though the stone was available from the first tower, authorities opted to used wood for the second one. The following description of the lighthouse was provided by the superintendent of lights in 1876:

This is a revolving white light, containing six mammoth flat-wick fountain lamps, and six 20-inch reflectors, on two square frames, three on each side. The lamps have flat reservoirs. The lantern is made of iron, with zinc floor, and is eight feet in diameter. The glass is 12 x 14 inches. The lighthouse is a white, octagonal wooden building, 60 feet high. The lighthouse and dwelling require painting and other repairs, which I ordered to be done. Owing to the extremely high water this year, the lighthouse would have been undermined, and perhaps overturned, were it not for the pier which was built there last year. The place is very well kept.

As the worldwide demand for sperm oil was outpacing supply, coal oil was introduced in some Canadian lighthouses in 1860 as a cost-saving measure. After this move demonstrated that coal oil had equal if not superior illuminating qualities, the lamps at Long Point were adapted to the use coal oil in 1864.

A contract was awarded in 1890 to Messrs. McCall and Mason of St. Williams to erect a steam foghorn at the east end of Long Point at a cost of $1,525. The fog alarm building was completed in 1891, but the delay in receiving the horns and machinery from the Pictou Iron Foundry and Manufacturing Company prevented the foghorn from being placed in service until May 1, 1892. The fog alarm building stood 200 yards south of the lighthouse, and its machinery sounded seven-second blasts separated by thirty seconds of silence when needed.

In 1905, the station received a new keepers house, coal shed, barn, and boathouse, and the following year a new fog alarm building was completed to house a diaphone operated with air compressed by an oil engine.

The present concrete, octagonal tower on Long Point was completed in 1916 by Charles Mattaini at a location 1,700 feet southeast of its predecessor under a contract for $8,490. The lighthouse stands 102 feet from its base to the vane atop its lantern, and it originally employed a revolving third-order Fresnel lens to produce a white flash every eight seconds.

As a further aid to mariners, a radiobeacon commenced operation on Long Point in 1929, transmitting a call signal of VGF.

Long Point is a popular place for birders during the spring and fall migration, as it is a natural stopover point for birds crossing Lake Erie. The bright beam of a lighthouse, especially in poor visibility, can be deadly to migrating birds. One day in early September 1929, Keeper Lorne Brown found hundreds of dead or injured birds at the base of the tower and telephoned William E. Saunders, an avid naturalist, to see if he was interested in examining them. Saunders was indeed and arrived the next day accompanied by a fellow naturalist.

The pair counted 823 birds killed during the previous two nights, including 583 warblers and 137 vireos, and Keeper Brown later packaged up birds killed in late September and shipped them express to Saunders. The following year, Saunders published a paper entitled The Destruction of Birds at Long Point Lighthouse, Ontario, on Four Nights in 1929, which noted that 1,237 birds of fifty-five types had been killed at the lighthouse.

Another paper published in 2003 studied the number of bird kills at Long Point Lighthouse between 1960 and 2003 and concluded that the character of the light has a drastic impact on avian mortality. Long Point Lighthouse was automated in 1989, at which time its third-order Fresnel lens was replaced by a solar-powered beacon whose beams were much more focused and of half the intensity. Between 1960 and 1989, 200 birds were killed on average in the spring and 393 in the fall, with a peak kill of 2,000 birds in a single night. Automation of the light led to a drastic reduction in the number of kills, with just 18.5 occurring on average each spring and 9.6 in the fall. The Long Point Bird Observatory was founded in 1960 to monitor and research birds on Long Point and provided much of the data used in the 2003 paper.

In 1978, much of Long Point became the Long Point National Wildlife Area, when the Long Point Company, which had acquired most of the point in 1866, donated 8,000 acres to the Nature Conservancy of Canada. The wildlife area was designated a biosphere reserve by UNESCO in 1986.