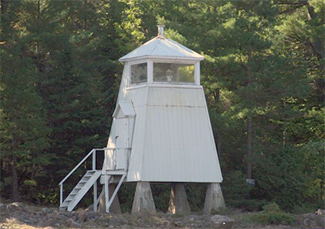 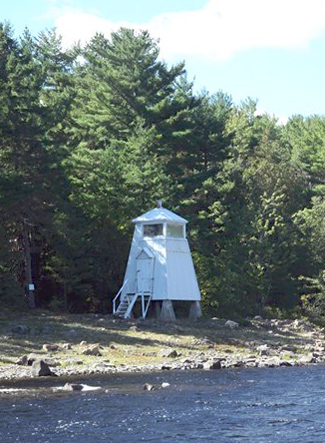 The Town of Deep River is situated along a stretch of the Ottawa River where its waters reach their greatest depth of 123 metres (402 feet). Nine kilometres downstream from the town, a small peninsula juts out into the river, creating an island-like obstacle for mariners. Known as McQuestions Point, this feature is named after a family that lived nearby.

In 1883, six new lights were established on the Ottawa River, including one on McQuestions Point, on the south shore of the Deep River, about 25 miles above Pembroke. Each of these six lights consisted of a small dioptric lantern hoisted to the top of a mast, which had a shed at its base. Benjamin McQuestion was appointed keeper of the light which shared his name on March 6, 1883 at an annual salary of $100.

During Maria McQuestions seven years as keeper, the mast at McQuestions Point was replaced in 1892 by a new one that was eighteen feet taller. This new mast cost twenty dollars and allowed the light to be seen above trees that had interfered with the light shown from the shorter mast. With the original mast, the light was displayed at a height of twenty-six feet above the river.

In the 1901 census, seventy-nine-year-old Maria McQuestion is listed as a lighthouse keeper and as living with her daughter Elizabeth McLeod, forty-six, and three grandchildren Minnie, Roderick, and Ida. Elizabeth McLeod replaced her mother as keeper of the light in 1904, and during her seventeen years as keeper, C.L. McCool of Fort William built a square, wooden tower on McQuestions Point in 1915 at a cost of $500. This lighthouse stood eighteen feet tall and exhibited a fixed white light from a seventh-order lens.

Gerald Nadeau, who was born in the 1930s, provided the following information about McQuestion Point and the lighthouse that his family kept there for an article in Tamrack Magazine: Exploration of Valley History:

Living by the Ottawa River is my first memory. We lived on a small farm. It was just a small clearing with a log house and two stables. McQuestion Point, where we lived, was a stopping place by the river. Teams of lumbermen used to come to the old house. I think theres only three logs left of it now. There were quite a few of these places used for overnight stops, what you would call keepovers. From Sheenborough up to our old house was one days trip so people would come that far and stay the first night. Then theyd go as far as the Swisha, which was another day.

All of these places were ports for travelling lumbermen. There was no hydro, telephone, or radio at the old house. The only furnishings in the house were six chairs at a table, a box stove for night firing, a cook stove, a cupboard, three beds, two or three water pails, and some pots and pans. We just lived season to season; nothing ever made you hurry, so it wasnt important if it was eight oclock, nine oclock, or ten oclock.

The closest house was about a mile and a half away and the roads were never ploughed. In those conditions, if you were able to do anything like chop wood, get water, or any of those other chores, you did them willingly.

We used to look after McLeods lighthouse which was on an island [McQuestions Point]. The island was a beautiful spot. It was best in the springtime-the whole island would just be covered with dandelions as thick as they could grow and the grass would be cut down because of the cows grazing on it. Youd hear the ice come down the mountains. The gather of ice would melt in the spring and it would just keep flowing down the mountain until finally it got so heavy that it would break away with whatever trees would come with it and it would tumble down onto the ice on the river. It would almost be like thunder. Every second spring, youd hear it and the next day if you went to the river youd see all the trees out on the ice where the big icicles had broken.

The lighthouse had a globe about 20 inches high and it burned about two quarts of oil in twelve hours. Each evening you had to clean out the lamp glasses, trim the wick and check the wick for length. The wick was about two inches wide and there were two of them in the globe which was housed in a square glass enclosure. The two wick adjusters were side by side. If one fire went out then you always had the second one. You had to light it and then turn the wicks up until the globe got warm and then youd turn it down so that there was no smoke from it. The coal oil had to be carried down in the spring. It took three 45 gallon containers to fill the tanks in it. They used to give us twelve dollars a month for looking after the lighthouse. You had to go down every morning and blow the light out. I never went alone, because I was too young and the lightstand was quite high. Youd have to get up on something to reach it.

During World War II, the collaboration of nuclear researchers in Britain and Canada led to the creation of Chalk River Laboratories on the Ottawa River, just east of McQuestion Point. This facility opened in 1944 and activated the first nuclear reactor outside the United States the following year. The Canadian government formed Atomic Energy of Canada Limited (AECL) in 1952 to promote the peaceful use of nuclear energy, and since then AECL has used the Chalk River operations to produce nuclear material for medical and scientific applications. Chalk River Laboratories supplies about one-third of the worlds medical isotopes.

For a larger map of McQuestin Point Lighthouse, click the lighthouse in the above map.

As it is surrounded by Atomic Energy of Canada Ltd. (AECL) property, which is a secure property with no public access, McQuestin Point Lighthouse is best seen by boat from the river.