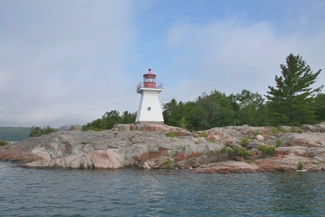 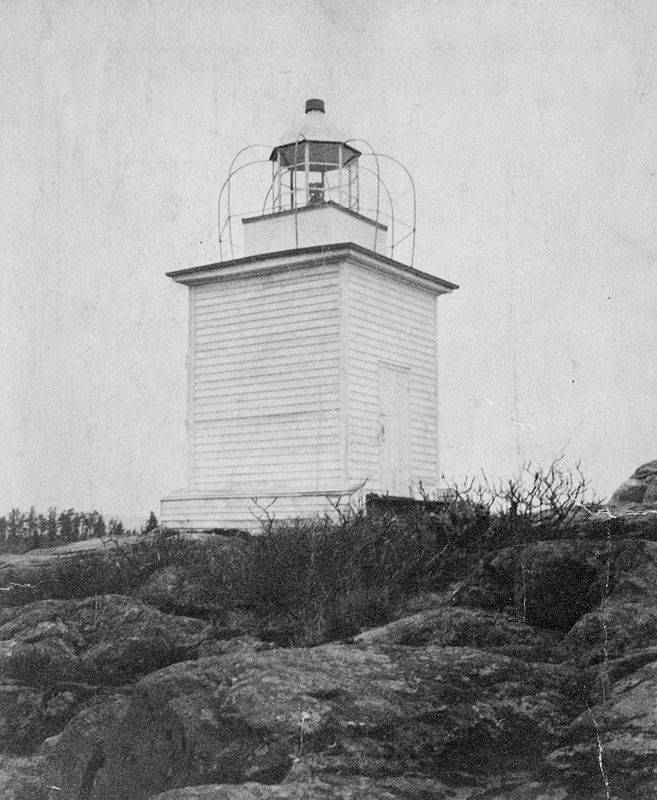 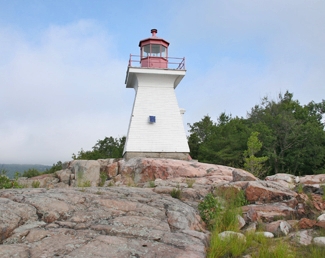 Located roughly seventy-five kilometres southwest of Sudbury, the town of Killarney is situated at the trip of a granite peninsula that juts out into Georgian Bay. A long narrow channel separates Killarney from George Island, which protects the town from direct exposure to Georgian Bay.

The Ojibwa called the place Shebahonaning, meaning here is a safe canoe channel, and early traders and explorers used the channel on their voyages between Georgian Bay and Lake Superior. Etienne Augustin de la Morandiére, became the first white settler in the area when he established a trading post on the channel in 1820, and the crops and cattle he raised helped Killarney become an important fishing community on the north shore. Access to the town was limited to boats until Highway 637 was completed in 1962.

The contract that saw the six Imperial Towers erected on Lake Huron and Georgian Bay in the 1850s was also to cover the construction of four lighthouses to mark the North Channel, which runs between the northern end of Georgian Bay and Lake Superior, but cost overruns led to the postponement of the North Channel lights. Finally, in 1866, the government built five nearly identical lights along the North Channel: one on Clapperton Island, two at Little Current, and two at Killarney.

Philemon Proulx was appointed the first keeper of both lights, and in 1869 he was earning an annual salary of $500. In 1876, Darius Smith, the Superintendent of Lights above Montreal, visited the Killarney lights while Proulx as still keeper and made the following report:

In the upper one there are two dual burner fountain lamps, and one 14-inch reflector on iron circle. The lantern is of iron, four and a half feet in diameter. The glass is 17 x 21. The lighthouse is a white square wooden building, 14 feet high, while the light is 19 feet from the ground. The lower light has the same number of lamps, reflectors, &c., as the upper one. They are both very cleanly kept, but require puttying and painting. The keeper of this light has been absent from his post for over two years to obtain, I am told, medical treatment, during which time the lights have been kept by his two sons, who tell me that they expect him home very soon.

The keeper of the lighthouses at Killarney initially had to provide his own accommodations until a dwelling was built in town in 1870. Keeper Proulx was superannuated in September 1880 and replaced by Pierre Regis de Lamorandiére, grandson of the founder of Killarney.

Shortly after Keeper Lamorandiére received his appointment, Andrew Peters of Killarney informed the government that Lamorandiére was a half breed drawing Indian Annuity and should be disqualified from holding a government position. Technically, Lamorandiére should not have been receiving an annuity as only his mother was of First Nation descent, and the annuity was based on the lineage of ones father.

The following is Keeper Lamorandiéres response to the issue raised by Peters:

Mr. Peters says that I am only too glad to receive Indian moneys. I beg to say that I do not steal it, it is sent to me by the Indian Department and I accept it, and I am not the only one here who are not Indians but receive annuity money, and neither are they ranked as Indians. I would like to see the person who would refuse to accept any money coming in their handsand I think if Mr. Peters was in a position to draw Indian pay he would be very glad to receive it.

Then Mr. Peters appears to have a wish for the mere fact of my receiving annuity that I should be ranked an Indian. I would state that [the] Lamorandiére family were never looked upon as Indians. It is only since I got the situation of LightKeeper that my enemies got into their heads that I am an Indian and wish to disqualify me from holding an office under the Government. It is true I have some Indian blood. I am not ashamed of it, but nevertheless I think the Government makes no distinction as regards the nationality so long as a person is honest, and trustworthy, whether Indian or otherwise.

Keeper Lamorandiére apparently lost his annual annuity, which in 1880 was twenty-four dollars, but records from the Indian Affairs show that the question of who should be receiving annuity in Killarney and in the Lamorandiére family continued to be debated long after Keeper Lamorandiére retired in 1904.

As accessing the northwest light in inclement weather was risky, Keeper Lamorandiére built a shack in a hollow near the lighthouse and paid two hermits, Oliver Pilot and Henry Solomon, to look after the light when he couldnt reach the island. Besides serving as keeper, Lamorandiére was also hired to aid the fishery overseers in their struggle against illegal fishing. This role created some animosity between him and some members of the community, and in 1893, he was personally threatened and the hay he used to feed his cattle was set on fire. Pierre Regis de Lamorandiére passed away on February 16, 1923 shortly after returning from Toronto, where he had gone to promote a road between Killarney and Sudbury.

The present lighthouses at Killarney, square, tapered towers surmounted by octagonal iron lantern rooms, were erected in 1909 at a cost of $782.29. A hand foghorn was used at the east light until 1957, when a fog whistle was installed at the tower.

On a windy morning in November 1956, Keeper Solomon arose early and headed out to tend the east light. When he hadnt returned for breakfast, Merle sent their sons out to find him, and Teddy soon returned, screaming Dads lying on an island and his boat is going around the island! In a moment of panic, Merle grabbed the phone, dialed the operator, and begged her to find someone to help Ferdinand.

As Keeper Solomon drew near the east light that morning, large breakers capsized his boat. Ferdinand managed to grab two life jackets before going overboard and used these to stay afloat as he was repeatedly washed by waves. The icy water soon sapped his strength, but before he abandoned hope, a large wave deposited him gracefully on Jackman Shoal as if it were a Godsend. The local game warden braved the waters to rescue Keeper Solomon, who made a full recovery and looked after the lights until his death in 1979 at the age of fifty-nine.

Located on the southern end of Partridge Island about a mile northwest of Killarney, marking the west entrance to the harbour.
Latitude: 45.983694, Longitude: -81.532111

For a larger map of Killarney Northwest Lighthouse, click the lighthouse in the above map.

Killarney Northwest Lighthouse is best seen by boat, though a distant view is possible from the end of St. Paul Street in Killarney.