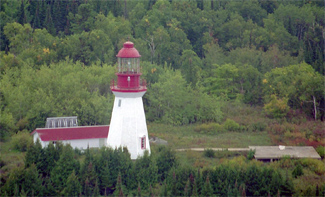 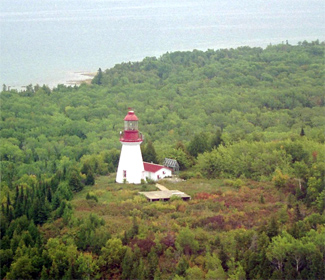 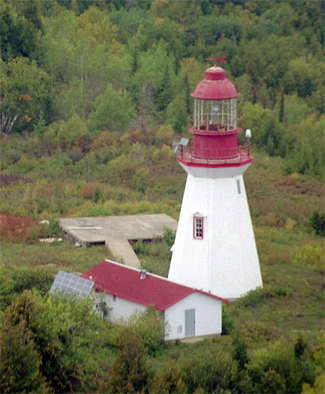 In the Annual Report of the Department of Marine and Fisheries for 1869, Peter Mitchell, the departments minister, wrote: In view of the importance of the interests connected with the navigation in the Georgian Bay, which is the great British highway of communication between Ontario and Fort William and the North West, I have recommended to Council that a lighthouse should be erected on Lonely Island in the Georgian Bay, which lies in the rack of vessels running between Collingwood and Sault Ste. Marie.

The ministers recommendation was immediately acted upon as the following year a lighthouse commenced operation on the remote and nearly circular Lonely Island. J.B. Spence was awarded an $1,800 contract to erect the lighthouse, while E. Chanteloup supplied the lantern room for $189.53, and C. Garth & Co. the lamps and other necessities for $201.92. The lighthouse consisted of a one-and-a-half-storey keepers dwelling with a square tower rising from one end of its pitched roof. While the lighthouse stood just forty-two feet tall from its base to the vane atop the lantern room, its light had a focal plane of 192 feet above the bay thanks to the lighthouse being positioned on the islands highest spot.

John Egan was appointed keeper of the light on August 19, 1870 at an annual salary of $350, and he first exhibited the light on the night of October 1, 1870. Four circular-burner lamps, each set in a sixteen-inch reflector, and a single flat-wick lamp backed by a fifteen-inch reflector were used to produce the stations fixed white light.

Whether it was loneliness or some other reason, John Egan resigned as keeper on July 29, 1872, and Henry Solomon was placed in charge of the light. Tragically, Keeper Solomons tenure lasted less than year, and his demise was detailed by the Department of Marine:

Mr. Henry Solomon, keeper of the lighthouse at Lonely Island, was drowned in the month of June last, while proceeding from Killarney, near the mainland, to the island with supplies. He had nearly reached the island, in company with an Indian, when the boat upset in a squall, and both Mr. Solomon and the supplies were lost, but the Indian was saved. He left a wife and a large family of young children, and the Government considerately appointed his son, Dominic Solomon, lightkeeper in his place, on the 17th September last, at a salary of $450 per annum, which will no doubt prove a great relief to the family, as they were in extremely poor circumstances.

Subsequent reports reveal that Dominic Solomon, who was eighteen when his father drowned in 1873, lived on the island with his widow mother and nine siblings. Mrs. Solomon was awarded the customary gratuity of two months salary, which amounted to $58.34.

Dominic was still serving as keeper in September 1882, when the wooden steamer Asia foundered off the east side of Lonely Island while making its way from Collingwood to French River. Many of the more than one hundred people aboard were able to board lifeboats, but only two teenagers managed to reach civilization alive after the lifeboats were overturned several times. The tug Kendell was deployed to search for bodies, and in early October it stopped at Lonely Island to ask Keeper Solomon if any bodies had come ashore on Lonely Island. Dominic first denied having seen any bodies, but when pressed, he admitted one corpse had washed up on the island. An article in The Manitoulin Expositor reported on the incident:

The [group] found the body of a woman clothed and having a life-preserver on. It was near the waters edge, and a board laying on top of it. No efforts had been made to bury it. On examining the corpse the name of Mrs. Woods was found on the corset and stockings.  The corpse had been badly decayed and was unrecognizable. The party removed the body further inland, and scraped gravel off a large flat rock and placed the body on it with a board for covering. This was the best form of burial they could make, as it was too decayed to be taken aboard the boat. They returned to where the lighthouse keeper was fishing and told him the body had been robbed.

The search party had noticed impressions on the bloated bodys neck and finger that had to have been made by jewelry, and Dominic confessed that he had taken a pearl broach. A thorough search of the keepers dwelling turned up various items recovered from the Asia, including three life preservers with a foul odor. The Department of Marine promised that an inquiry into Keeper Solomons conduct would be held. If an investigation were carried out, Dominic must have been exonerated as he continued to serve on Lonely Island until resigning in 1885.

Lonely Island Lighthouse was destroyed by fire in 1906, forcing the Department of Marine to rush to erect a temporary light in the form of an anchor lens lantern hoisted atop a pole. The next year, the following notice was published to alert mariners of a new light:

The Canadian government gives notice that on Oct. 15, 1907, a third order dioptric group flashing white light showing 1 group of 3 flashes every 7 ½ seconds, thus, flash ¼ second, eclipsed 1 second, flash ¼ second, eclipsed 1 second, flash ¼ second, eclipsed 4 ¾ seconds, will be exhibited from a new lighthouse erected on the northern end of Lonely Island, Georgian Bay, Lake Huron, and the temporary fixed white light shown from a pole on the site of the old lighthouse will be withdrawn. The new light will be elevated 195 ft. above lake level and should be visible 20 miles. It is obscured by trees on the summit of the island over an arc of 79 ½ °  The tower is a white octagonal wooden building, 57 ft. high, with sloping sides, surmounted by a circular iron lantern painted red. It is located on the edge of a cliff 300 yards back from the northern shore of the island and 80 ft. northward of the site of the old lighthouse which was destroyed by fire.

Rather than place the keepers dwelling near the lighthouse, the department decided to build it near the shore, where procuring water would be easier. A fog signal building was constructed on the shore in 1944 to house an acetylene gun, and in the early 1960s a keepers bungalow was added to provide more living space for the head keeper and assistant then staffing the station.

John Adams, who served as head keeper at Lonely Island from 1959 to 1965, had an unplanned adventure while making a supply run in the stations sixteen-foot boat. Near Yeo Island, Adams had to switch gas tanks, but after doing so, he couldnt get the boat to run. Flipping up the motor, he discovered his propeller had fallen off. Fortunately, he had two oars (and two rifles) aboard, and he began rowing toward shore in great frustration. Adams was certain that Keeper Bill Spears on Cove Island was watching him with his binoculars and having a good chuckle.

After five hours of rowing I thought, if I get close enough to that lighthouse, Ill start shooting the windows out  they wont be so smart then! Sure enough, Keeper Spears was indeed watching and soon came to Johns aid, bringing along a bottle of whiskey as a peace offering. I couldnt have lifted [the whiskey] if I wanted to, Adams recalled. I had blisters on my hands, everywhere! I was so mad!

Another not-so-cherished memory Keeper Adams had from his days on Lonely Island was having to climb the more than 100 steps up to the lighthouse each day laden with oil. We had a yoke to carry five gallons on each side, Adams said. The first year I was there the steps were in terrible shape, snow piled half up the cliff in winter, and in summer, rattlesnakes, that hell wouldnt have were coiled up on them.

The steps no longer present a problem, as the Coast Guard now lands their helicopters on a wooden pad next to the automated lighthouse during their visits. The stations buildings on the shore were set ablaze in 1995, leaving just the bluff-top lighthouse all alone on Lonely Island.

For a larger map of Lonely Island Lighthouse, click the lighthouse in the above map.

Lonely Island Lighthouse is best viewed from the air. The Fresnel lens from the lighthouse is on display at Huronian Museum in Midland.