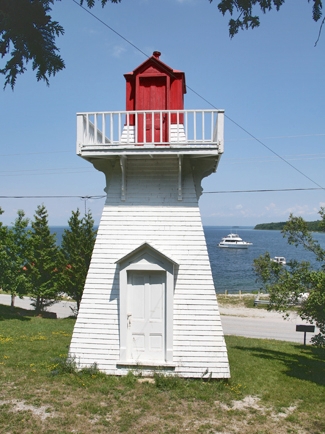 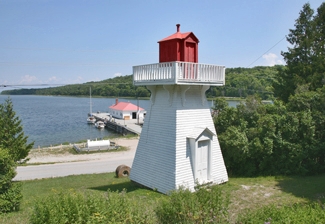 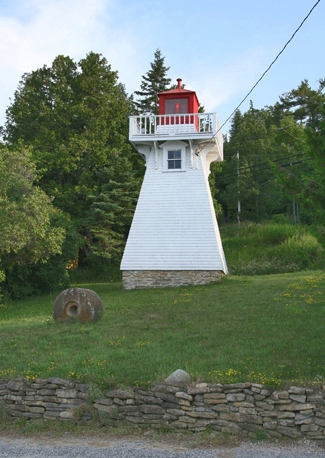 In the Ojibwe language, Kagawong means where mists rise from falling waters, a befitting name as the eleven-metre-tall Bridal Veil Falls are situated a short distance from where Kagawong River meets Lake Huron.

William and Robert Henry, two sawmill owners from King Township near Toronto, founded Kagawong after they were granted 800 acres of land and a mill seat provided they build a grist mill and recruit twelve settlers. They built their mill on top of the west bank of Bridal Veil Falls, and by 1880, Kagawong was a busy port on Manitoulin Islands north central shore, exporting produce, livestock, fish, and lumber. Both Henry brothers died tragically in 1882, Robert from a heart attack in May after rescuing passengers from the burning ship, Manitoulin, and William in September, a victim of the Asia shipwreck.

To help guide steamers into the harbour at Kagawong, the Department of Marine hired John Gray to build a twenty-five-foot-tall mast light with a shed at its base. The light, which stood 100 feet west of the towns dock and about seventy-five feet back from the shore, cost $125.78. John Gray was hired as the lights first keeper at an annual salary of $72, and he placed the fixed white light in operation on May 10, 1888. On October 18, 1892, a fire swept through much of Kagawong, destroying the mast light and shed.

Tenders were invited for the erection of small enclosed tower to replace the mast light, but the bids received were so high that the Department of Marine delayed the project until one of its foreman could be sent to Kagawong to build the new lighthouse using days labour. The Department of Marines report for 1894 details the construction of Kagawongs second lighthouse:

Mr. Noble was sent to Kagawong in September last, and erected a lighthouse to replace the temporary light maintained since the mast and shed were destroyed by fire. This tower was completed for the sum of $293.81, thereby justifying the departments action in refusing to accept any of the tenders received for the work, the lowest of these having been $925.

The tower is built in the same location as the original mast...It is a square pyramidal wooden building, surmounted by a wooden lantern, and is 27 feet high from its base to the vane on the lantern . The tower is painted white, the lantern red. The light is a fixed white catoptric light, elevated 38 feet above the level of the bay. It should be visible 11 miles from all points of approach by water. It was first shown from the new tower on the 29th October, 1894.

This tower is still in operation today, at its original location, a small hill overlooking the bay.

The white wooden structure rises to decorative supports that help hold the square walkway and red square lantern room. The light was changed to a fixed red light in 1950 and then automated in the 1960s.

Austin Hold, who cared for the automated light in the 1960s, described the craftsmanship of the structure: Whoever built the light did a good job; the timbers are well done. Its more than a shell by inexperienced carpenters.

After the mills closure, Kagawong still prospered as it was a favourite stopping place for excursion steamers en route to Lake Superior. Today, the boat traffic is primarily pleasure craft, but the lighthouse still stands to guide mariners into what is touted as Ontarios Prettiest Village.

For a larger map of Kagawong Lighthouse, click the lighthouse in the above map.

Take ON-540 to Kagawong and continue north on Main Street into town, and you will see Kagawaong Lighthouse on your left.


Besides the lighthouse, there are a few other sites in Kagawong worthy of a visit. St. John the Evangelist Church, just across the street from the lighthouse, features a stained glass window with a lighthouse and a pulpit fashioned from the prow of the pleasure boat RHU that ran aground and led to the death of four people in 1965. You can read about this tragic incident here. Also along the waterfront is a stone mill, which served as a pulp mill and then a hydro-electric plant, and this little lighthouse that marks a marina.