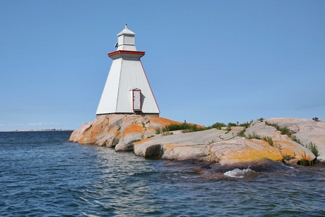 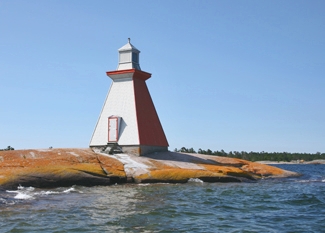 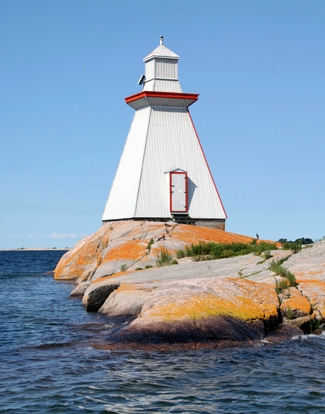 During 1891, Staff Commander John G. Boulton of the Royal Navy conducted a detailed survey of the various channels leading to Parry Sound using two open boats for shallow water sounding and his large vessel for deep water sounding. The following is an excerpt from Boultons report in which he recommended the establishment of five new lights to help mariners safely sail from Red Rock Lighthouse to the Town of Parry Sound:

This section is the most broken up portion of the whole north-east coast of Georgian Bay, there being upwards of 4,000 islands and dry rocksThere are four channels leading to Parry Sound, the deepest and most direct approach from the westward being that close south of Red Rock lighthouse. With the usual characteristics of North Shore water, there are many dangers in all these passages, and additional aids to navigation are required before Parry Sound can be safely navigated by vessels of large draught. The only lighthouse at present in the approach to Parry Sound is that on Red Rock, the southernmost islet of the string called on the old chart the Indian islands. This light is very valuable, not merely as a local light, but for general coastal purposes also. But to render the Sound navigable at night, there would be required in addition to this light, five other lights to serve as ranges.

The sites of the centres of those proposed lighthouses, are marked by lead run into holes drilled into the rocks, close by which are broad arrows. Small beacons are erected over these marks.

To reach Parry Sound, mariners would pass south of Red Rock Lighthouse and then align their vessel with Snug Island Range. Once Jones Island Range was brought into alignment off their starboard side, vessels would follow this second range until they were a quarter-mile from Gordon Rock, at which point they would steer toward the light on Hugh Rock.

Charles Mickler of Collingwood, who had built the Pointe au Baril Range Lights in 1889, was awarded a $3,165 contract to erect the five lights, and he carried out the work during the 1893 season. When unsatisfactory reports were received from the local inspector, C.F. Cox, an Assistant Engineer for the Department of Marine, was sent from Ottawa to investigate the matter. Cox reported so many defects in the work that the Department refused to accept the lighthouses or pay for them until the work was made satisfactory.

As it was too late in the season to effect the repairs, the work was postponed until the following spring. A final inspection of the lighthouses made after Mickler claimed to have fixed the lighthouses found that the buildings were still far from being in compliance with the original specifications. The harsh winter weather had revealed additional defects in the buildings, and rather than trust the work to Mickler, the Department of Marine had W.H. Noble, its foreman of works, complete the project. Noble had to re-shingle the roofs, redo the siding on the walls, and renew the cornices before the lighthouses were finally weatherproof. This additional work cost $647.40, which was charged against the contract price.

3. Gordon Rock Light.The third light is on the summit of the northernmost Gordon Rock, and is the front light of a pair of leading lights to be known as the Jones Island Range. The light is a fixed red catoptric light, elevated 40 feet above the level of the bay, and should be visible 7 miles over an arc of 180 degrees between the bearings of S. E. by E. 1/2 E., round through S. to N. W. by W. 1/2 W. The tower is a square pyramidal wooden building, surmounted by a wooden lantern. It is 38 feet high from the ground to the vane on the lantern, and is painted white, with a red stripe 3 feet wide on the middle of the side facing the channel.

4. Jones Island Light.The fourth light is located on the south-west point of Jones Island, distant 2,900 yards S. E. 1/4 S., from Gordon Rock light. The light is a fixed white light, elevated 63 feet above the level of the bay, and should be visible 8 miles in, and over a small arc on each side of, the line of range. The building is of wood, and consists of a square pyramidal tower, rising from the roof of a rectangular dwelling house, and surmounted by a wooden lantern. It is 50 feet in height from the ground to the vane on the lantern, and is painted white with a red stripe 3 feet wide down the middle of the side, facing the channel.

These two lights in one lead in S. E. 1/4 S. from the intersection with the Snug Harbour Range lights to Gordon Rock, clear of Ariel Rock, Hall Reef, Telegram Rock and Hooper Island Reef, on the starboard hand; and clear of Black Rock and Twin Rock, on the port hand.

Keeper Thomas Huff was born in Yorkville (Toronto) in 1845 and moved with his parents to Collingwood at the age of twelve. In 1865, he relocated to Parry Sound, becoming one of its first residents. Huff first worked as a builder and painter in Parry Sound before serving as an engineer on a small steamship. Thomas married Maria Burns in 1865, and the couple had at least seven children. At the time of his appointment as keeper in 1894, Thomas was forty-nine years old and working as a jeweler, watchmaker, and gunsmith.

For an annual salary of $400, Keeper Huff was expected to keep not only Jones Island Range but also the light on Hugh Rock. Just a few months after the range lights were established, Thomas Walton, the mayor of Parry Sound, filed a complaint against Keeper Huff based upon information received from Adam Lawson, the keeper of Red Rock Lighthouse, who said the lights on Gordon Rock and Hugh Rock were not regularly lit. Due to his lack of experience, Keeper Huff apparently had some trouble with the lights and the stations boat, but his work must have improved as he remained keeper through 1900.

Jones Island is named after David A. Jones, who used the island along with a few others in Georgian Bay for breeding bees he gathered from Cyprus, Syria, and Palestine. Jones apiaries were so successful that his hometown of Clarksville, Ontario was renamed Beetown (now Beeton) in his honour in 1874. Jones was Canadas first major commercial honey producer and served as the first president of the Ontario Beekeepers Association in 1881 and then founded the Canadian Been Journal in 1885. After using Jones Island from 1880 to 1884, Jones gave up the costly bee breeding business and focused on the nearly 1,000 bee colonies he had on his farm in Beetown.

In 1898, the lighthouse placed on Hugh Rock was moved to Carling Rock, as the South Channel leading into the Town of Parry Sound was abandoned in favour of the North Channel.

For the opening of the 1902 navigation season, Jones Range Lighthouses were painted solid white, including the roofs of the lantern rooms and dwellings, to make them more conspicuous against their typically dark backgrounds. A variety of color schemes were later tried on the lighthouses to increase their visibility. In 1960, their colouring was described as orange and black vertical striped daymark on a yellow and black vertical striped tower. Today, the lighthouses are painted white, with the side facing the range line painted predominately red.

On June 7, 1915, the characteristic of the front light was changed from fixed red to fixed white, and on August 24, 1915, a duplex lamp and a twenty-five-inch, long-focus reflector were installed in the rear light.

Though there were some issues in getting them built, the twin structures that serve as the rear lighthouses for the Jones Island and Snug Harbour ranges have held up well. The only other surviving example of this style of lighthouse is Nova Scotias Mullins Point Rear Range Lighthouse, which was also built in 1894.

For a larger map of Jones Island Range Front Lighthouse, click the lighthouse in the above map.