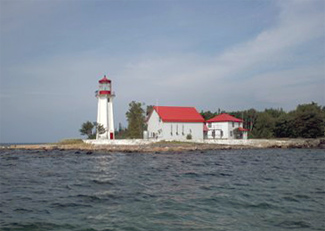 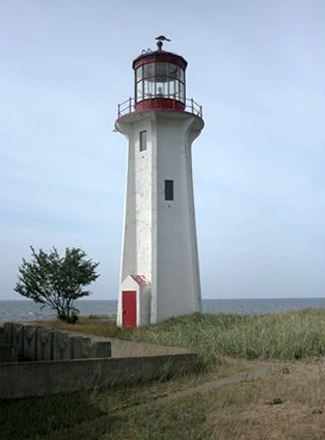 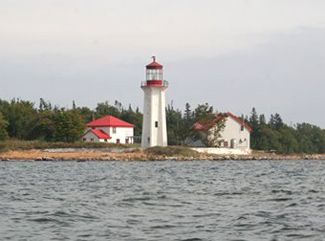 Ile Parisienne, Parisian Island, is five miles long, north to south, roughly a mile wide, and lies near the middle of Whitefish Bay, just east of the U.S.  Canadian boundary line. In the early 1900s, vessels sailing between Whitefish Point and a buoy on Gros Cap Reef would pass within about two miles of the southern tip of the island, and the Canadian government eventually decided to place a lighthouse on the southern tip to aid mariners.

On August 29, 1911, William Fryer, an architect and builder from Collingwood, entered into a $14,650 contract to build a lighthouse, dwelling, oil shed, boathouse and wharf on the island. The following description of the new station was published by the Lake Carriers Association in 1912:

A new lighthouse and fog signal was established on the southwest extremity of Parisian Island and commenced operations September 15, 1912.

The lighthouse is a hexagonal gray tower with six buttresses. It is built of reinforced concrete and is surmounted by a red polygonal iron lantern. From its base to the vane of the lantern, the tower is 58 feet high. It is set 50 feet back from the waters edge on land six feet above the level of the lake. The bearings are: Latitude, 46 degrees, 38 minutes, 54 seconds; longitude, 84: degrees, 42 minutes, 48 seconds.

The light is of a second order dioptric type, of 18,000 candle power. It is an occulting white light, eclipses of two seconds, alternating with illumination of four seconds. The light is shown at an elevation of 54 feet and is visible 12 miles from all points of approach by water.

A rectangular white wooden double dwelling with hip roof stands 120 feet 55 degrees (N. 57 degrees 40 minutes E., mag.) from the lighthouse. A storehouse and boat house, also painted white, are on the shore east of the building.

The Canadian Fog Signal Company of Toronto provided the class D diaphone fog alarm and duplicate plant at a cost of $6,079.28, and the Victoria Foundry Company of Ottawa supplied the iron lantern for $1,312.60. John Douglas was hired as the first keeper of the lighthouse in 1912 and served for ten years until he and five other keepers on Lake Superior perished while returning to their stations in the spring of 1922. The keepers were typically on their stations from April, when the ice usually broke up, until early December.

On April 30, 1922, word was received at Sault Ste Marie via radio that the U.S.S. Cook had picked up a large piece of a ships cabin with markings that corresponded with those of the C.G.S Lambton, a lighthouse tender feared lost on Lake Superior. Built in 1909 at the Sorel shipyards, the Lambton was 108 feet long, with a beam of twenty-five feet and a draft of thirteen feet.

The Lambton left Sault Ste. Marie on April 18, 1922 in the company of the Glenfinnan and the Glenlivet and had on board five keepers bound for Michipicoten Harbour, Caribou Island, and Ile Parisienne, along with a crew of sixteen. As the vessels entered Whitefish Bay, they encountered heavy ice and received word that heavy gales were sweeping Lake Superior. Ice floes damaged the steering on the Lambton and one of the two accompanying vessels. The Glenfinnan and Glenlivet decided to return to the Soo, but after repairing its steering with one-inch lines, the Lambton pressed on alone.

When days passed and reports were received that there were no lights on Ile Parisienne or Caribou Island, authorities concluded that heavy ice had prevented the Lambton from dropping off the keeper and assistant keeper at Ile Parisienne and that the vessel broke up somewhere near Caribou Island on the nineteenth.

Ile Parisiennne was held by the Crown in its entirety until 1902, when a fishing company purchased 114 acres on the southeast side of the island. This land was never developed, and in 2014 its owner was offering the parcel for $1.3 million. The remainder of the island, minus that set aside for the lighthouse, became the Ile Parisienne Conservation Reserve in 2001.

For a larger map of Île Parisienne Lighthouse, click the lighthouse in the above map.