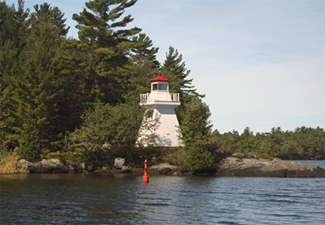 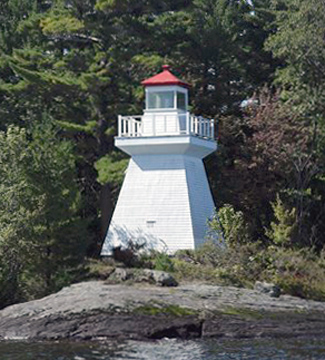 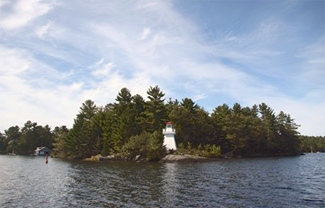 The area surrounding Lake Muskoka was inhabited by the Ojibwa before the arrival of European settlers, and the lake is believed to be named for Mesqua Ukee, a tribal chief whose name means not easily turned back in the day of battle. The first white man known to have crossed Lake Muskoka was Lieutenant Henry Briscoe of the Royal Engineers, who transited the area in 1826 looking for a route across Upper Canada that was less prone to attack than sailing along the St. Lawrence River and through the Great Lakes.

As its rocky terrain was not well suited for agriculture, the area didnt see significant development until it was opened to logging in the 1860s. Alexander Cockburn launched Lake Muskokas first steamship in 1866. Known as the Wenonah, Ojibwa for first daughter, the vessel was limited to travel on Lake Muskoka until 1871 when the government built locks at Port Carling in 1871, allowing ships to travel between Lake Muskoka and Lake Rousseau, and dredged a channel between Lake Rosseau and Lake Joseph.

Access to the area took another leap forward when the Toronto, Simcoe, and Muskoka Junction Railway Company was incorporated in 1869 to extend a line to Gravenhurst, situated on the southern shore of Lake Muskoka. The endeavor was hampered by rugged terrain and financial difficulties, but the line was finally completed in 1875, when it was absorbed into the Northern Railway.

With tourists now having access to the lakes through train and steamboat service, several resort hotels, including Royal Muskoka, Windmere, Rosseau, and Beaumaris, sprang up on the rocky shores. To guide vessels through the narrows that separate the waters near Gravenhurst from the rest of Lake Muskoka, the Department of Marine invited bids in 1883 for the construction of a mast, shelter shed, and beacon light. Henry Castle of Gravenhurst was awarded a $427 contract for the work, and in 1884, the department provided the following description of the light:

This, a small beacon, is situated on the south-east point of Denisons Island, at the northern entrance of Gravenhurst Narrows. It is a fixed white dioptric light, shown from a lantern hoisted on a mast 25 feet high, and is elevated 23 feet above water mark, and should be visible 10 miles from all points of approach.

David Schell was appointed the first keeper of the light at an annual salary of $100.

A more formal light was finally built to mark Gravenhurst Narrows in 1905, and the next year, the following description of the new lighthouse was published:

A lighthouse tower was erected on the southeast point of Denison island, at the site of the old pole light, and the pole and shed were removed. The tower is an inclosed, square wooden building, with sloping sides, surmounted by a square, wooden lantern, the whole painted white. It is 27 feet high from its base to the top of the ventilator on the lantern, and rests on a masonry foundation 4 feet high. The light is a fixed white dioptric light of the sixth order, elevated 28 feet above the level of the lake, and visible seven miles from all points of approach by water.

The work was done under contract by Mr. George Brown, of Bracebridge, Ontario, at a total cost of $701, the contract price being $650.

After years of exposure to the elements, the wood in Gravenhurst Narrows Lighthouse had started to rot, and the Canadian Coast Guard decided to replaced the historic tower with a modern structure. Fortunately, the towns heritage committee stepped in and asked that it be replaced in heritage fashion. The new tower, which resembles the original, was built of composite materials and was put in place in the fall of 2017. Pieces of the original tower were donated to Muskoka Discovery Centre and will be displayed at the museum in the future.

Gravenhurst Narrows Lighthouse remains active today, showing a fixed red light to guide vessels through The Narrows, but it is now formally known on the Coast Guards List of Lights as Lighthouse Island Lighthouse.

For a larger map of Gravenhurst Narrows (Lighthouse Island) Lighthouse, click the lighthouse in the above map.


I took a one-hour steamship cruise that was supposed to pass by the lighthouse, but as we approached the narrows, they announced that we were turning around. I went up to the pilot house and inquired if the tour didn't pass by the lighthouse and learned they were having issues with the coal they were burning. Due to poor coal, the steamship did not have enough power to go out into the main part of the lake, where the wind had whipped up some waves.