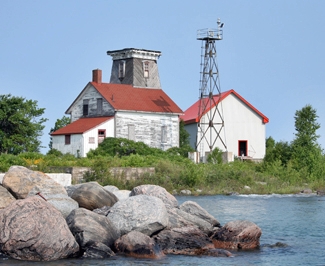 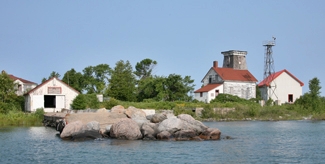 Three islands in the southeast corner of Georgian Bay were collectively named the Christian Islands in honor of eight Jesuit missionaries, now known as the Canadian Martyrs, who were tortured and killed during the 1840s. Individually, the three islands were called Faith, Hope, and Charity, but Hope Island is the only one that retains its name. Faith Island is now known as Beckwith Island, and Charity Island, the largest of the trio, is now known as Christian Island.

A lighthouse was established on Christian Island in 1859, and in 1883 a contract was awarded to T.R. Canton of Parry Sound to build a lighthouse on Hope Island. In its report for 1884, the Department of Marine described the lighthouse under the heading The following new lights have been established during the past season:

A lighthouse upon the extreme north-easterly point of Hope Island, in the Georgian Bay. A revolving white light is shown, attaining its greatest brilliancy every minute. It is elevated 54 feet above water mark, and should be visible 12 miles from all points of approach, except where interrupted by the trees on the island. The illuminating apparatus is catoptric. The building is of wood, painted white, and consists of a square tower 57 feet high from the ground to the vane on the lantern, with keepers dwelling attached. The sum of $1,864.08 was expended on this lighthouse.

Charles Tizard, who was appointed the first keeper of Hope Island Lighthouse at an annual salary of $450, noted his early frustration with the revolving light in the stations logbook: I had no instructions to work the machine so I used my own judgments and found that the reflectors were on upside down, causing the lamp tubes to ram against the reflectors and when heated, they burst.  I lighted up the first on the 27th of October and closed the fifteenth of December [1884]. Keeper Tizard died unexpectedly in 1886, but his wife continued to faithfully operate the light until Allan Collins took charge in 1887.

In 1891, Keeper Collins worked out an agreement with John Hoar of nearby Christian Island Lighthouse wherein the two keepers would switch stations so that the children of Keeper Collins could attend school on Christian Island. What started out as an amicable agreement soon turned sour. Hoard accused Collins of leaving him a boat that was only partly paid for, and Collins claimed that Hoard had taken his stove. Hoard was further angered when the government refused his petition to move the stable and shed he had built on Christian Island to Hope Island. In April 1892, Patrick Harty, the Superintendent of Lights, was sent to settle the dispute and afterward wrote: time will effect a cure between these men and all concerned will be satisfied to remain as they are.

This proved to not be the case as Hoar appealed to the Department of Marine over the way he had been treated by Harty. When Hoar was unwilling to back down, the Department of Marine announced its plans in late 1893 to appoint Thomas Marchildon as keeper of Hope Island. The December 21, 1893 edition of the Midland Argus carried Hoars reaction to this news: It is certainly since the announcement that Marchildon had gone to Hope Island, provisioned and equipped for duties of his government job, and the report now comes from up the shore that Marchildon has since been compelled to camp a little over gun-shot distance from the lighthouse, because from the moment he set foot on the island, Hoar has maintained a shotgun welcome. What causes the soreness between the old friends is not known here, but people are laughing at the mind picture of Hoar holding Hope Island Lighthouse with a shotgun against Marchildon, and Marchildon being compelled to sit down out of range of the shotgun for a few weeks to await the formation of ice to the mainland so the reinforcements can be secured.

Keeper Hoar finally did relinquish control of the lighthouse, but he remained on the island to keep an eye on things, and reportedly even took a shot at the new keeper. Keeper Marchildon sent a letter to the Deputy Minister of the Department of Marine claiming that Hoar had committed rape on Hope Island and should be considered a dangerous and possibly insane person. A short notice in an 1894 newspaper, provides further details on the matter: Barrie, Dec. 4: John Hoar, a fisherman and ex-lighthouse keeper at Hope island has been arrested and lodged in jail here, charged with having improper relations with a girl of thirteen.

In 1907, a rectangular frame building, measuring thirty by fifty-three feet and having a sixty-five-foot-tall chimney of reinforced concrete, was built on Hope Island, and the following summer a three-inch duplicate diaphone plant was installed in it.

A radiobeacon, with call sign VTB, was established on Hope Island in 1944 after the government erected a 100-foot-tall tower, added a transmitter room to the fog alarm building, and built new living quarters for the wireless operator. Twenty-four-year-old Norman Lancaster, who suffered from diabetes, served as the radio operator the first season, living on the island with Arthur Herron, the longest-serving head keeper of Hope Island Lighthouse, and his wife Merle Herron. As winter neared, Norman developed a severe cold, and Keeper Herron became concerned that Norman was not taking his insulin due to his poor health. Norman assured Keeper Herron that he was, but soon became so sick that he couldnt even send out a call for help. Unable to operate the equipment, the Herrons were powerless to help, but after a day-and-a-half, Norman revived enough to send a distress call to the station in Midland.

The local lighthouse vessel St. Heliers, which was up at Thunder Bay on Lake Superior retrieving buoys before winter set in, immediately set sail for Hope Island, but it lost the race with death, as Norman passed away a couple hours before it could reach the station. When Howard Warner arrived the next season to take charge of the wireless, the first thing he did was teach Keeper Herron enough Morse Code to send a distress signal.

In 1945, Merle Herron found out that she was expecting a child at the age of forty-five. With the constant worry of having two sons at war, Merle was concerned about her pregnancy, but the doctor assured her she was in good health. When Merle went into labour on the morning of September 27, Keeper Herron had Howard radio for assistance. This time, the St. Heliers arrived in time, and Dorthea Herron was born in a hospital that evening.

In the late 1970s, Bob Stubbins, a cottager at Silver Birch Beach, heard a rumour that Hope Island Lighthouse, which had recently been replaced by a steel, skeletal tower, was going to be destroyed. After Stubbins contacted the Coast Guard and learned the rumor was true, he offered to purchase the lighthouse but was told that since other parties were interested he would need to submit a bid. Stubbins turned out to be the sole bidder, but when he discovered that it would cost $100,000 to relocate and restore the lighthouse and that he would be liable if the structure fell into the shipping lanes during the move, he decided to abandon the idea.

Though the effort to sell the lighthouse failed, it did stop the planned destruction of the historic property. In 2002, the Huronia Lighthouse Preservation Society was formed as an offshoot of the Huronia Museum to stop the deterioration of several lighthouses in the area. The group focused on Hope Island Lighthouse initially and helped stabilize the structure and seal it to prevent the elements from causing further damage. Unfortunately, the group appears to have folded, and Hope Island Lighthouse has lost what might have been its last hope for survival. With two keepers dwellings, a boathouse, and a fog signal building in addition to the lighthouse, the station had a lot of potential but also would have required a lot of work.

In the fall of 2017, Priestly Demolition used a barge and a tugboat to transport three excavators, a Bobcat, a bush hog, multiple containers, and a portable bathroom to Hope Island. Public Works and Services, who had owned the light station for several years, felt the lighthouse, keeper's dwellings, boathouse, out house and pier should be removed and the island returned to its natural state. Priestly Demolition was the lowest bidder for the project and was awarded a $562,627 contract to complete the work. When weather permitted, the barge would make two trips to the island each day, transporting containers of debris back to Christian Island for processing and disposal. After all the foundations were removed, the station grounds were groomed, leaving little trace of the hundred-plus years that keepers spent on the island. Click here to watch a video of the demolition. A modern light tower and a helicopter landing pad remain on the island.

For a larger map of Hope Island Lighthouse, click the lighthouse in the above map.