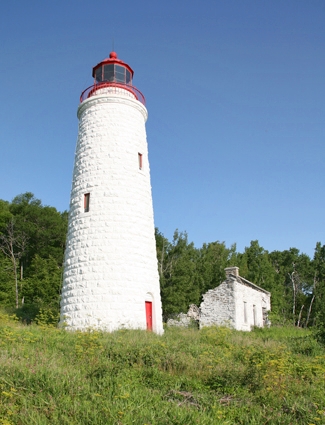 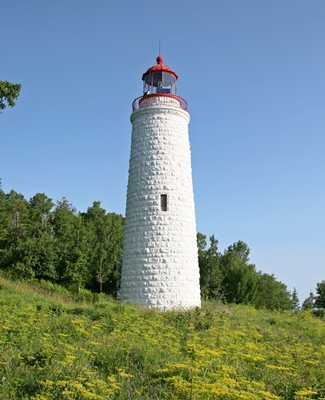 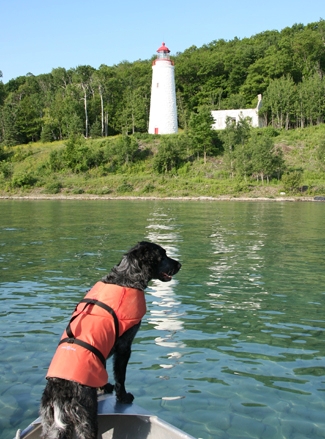 In its report for 1852  1853, the Commissioners of Public Works for the Province of Canada noted the need for additional navigational aids:

Based on the input of Captain MacGregor, who had commanded a steamboat on Lake Huron for many years and the Honorable W.B. Robinson, the commissioners recommended the construction of nine lighthouses for Lake Huron, Georgian Bay, and the North Channel. In 1855, John Brown, a builder from Thorold, was contracted to construct eleven lighthouses, six of which were actually built and are now known as the Imperial Towers of Nottawasaga Island, Christian Island, Cove Island, Griffith Island, Chantry Island, and Point Clark. The 1855 season was well advanced before Brown was able to assemble the steam and sailing craft, machinery, workers, and materials needed to carry out such an ambitious undertaking at locations so remote and difficult of approach, but by the end of that year, significant progress had been made at Nottawasaga Island, Christian Island, and Cove Island, and quarries were being examined for the other three lighthouses.

During 1856, the foundations for the tower and dwelling on Griffith Island were prepared, and the necessary limestone was quarried and dressed, but the work on the lighthouses suffered a serious setback that season when two steamers and a schooner were totally wrecked, and much timber was lost. Having to transport the cut stone up to 150 miles also delayed the project, as did the late arrival of the lantern rooms and Fresnel lenses from France.

In 1857, the tower and one-and-a-half-storey dwelling on Griffith Island were finished, and a temporary light was established atop the tower as the lantern room had arrived too late in the season to be put in place. On December 27, 1858, Griffith Island Lighthouse became the third of the six Imperial Towers to be formally placed in operation, exhibiting a fixed white light from a third-order Fresnel lens at a focal plane of 130 feet above the bay. The tower stood eighty five feet tall, and the light helped many a mariner locate the entrance to Owen Sound and Colpoys Bay, where safe shelter could be found behind White Cloud Island.

John Frame was appointed the first keeper of the light and served for a few months before Vesey C. Hill took charge and cared for the station for the next twenty-two years. Keeper Hill and his wife Sarah shared an Irish heritage, but Vesey had been born in Ireland, while Sarah was born in Africa. After an inspection of the lighthouse in 1876, Darius Smith, Superintendent of Lights above Montreal, reported:

The tower is a circular stone building, whitewashed, and is 50 feet high to platform. It is only middling well kept. The sill around the outside of the lantern requires to be covered with water-lime and painted. The dwelling and lighthouse both require painting and whitewashing. The keeper is old and not very strong, and, moreover, finds it almost impossible to get any person to remain there to assist him. He would like to be superannuated, or removed to some more accessible station.

According to an 1878 inspection report, Keeper Hills performance had improved as the light was listed as very well kept, and it was noted that Keeper Hill had built a boat for the station. Three years later, Keeper Hill got his wish and was superannuated at the age of sixty-six on April 27, 1881.

William S. Boyd had the longest tenure of any keeper on Griffith Island, serving from 1889 to 1922, while George H. Bennett, his successor, had one of the shortest terms of service. Keeper Bennett, who had lost a leg during World War I, left the dock on the south side of the island on December 13, 1922 for the lighthouse and was swept out into Georgian Bay and perished in the wind and snow. Bennett had been advised by people at the dock to take a horse and return to the lighthouse by land, but he insisted on going by boat.

Frederick Thornley, whose family had been the original European settlers on Griffith Island, took charge of the light after Bennett perished and served as keeper until an acetylene apparatus was used to automate the lighthouse before the opening of the 1924 season. The Lake Carriers Association noted in its annual report for 1928 that the light on Griffith Island was improved by replacing the seventh-order lens with a fourth-order lens. Griffith Island Lighthouse remains active today with a modern optic producing a white flash every four seconds atop the tower.

Since 1973, all of Griffith Islands 2,300-plus acres, save the small parcel on which the lighthouse stands, have been privately owned by the Griffith Island Club, which operates an exclusive hunting, target shooting, and social retreat for its roughly seventy members. The club boasts a lodge that can accommodate twenty-two people and has a private chef, a turf runway, and a private ferry service. Game on the island includes turkeys, pheasants, partridges, chukars, and white tailed deer. The club has reportedly applied for ownership of the lighthouse under the provisions of the Heritage Lighthouse Preservation Act.

For a larger map of Griffith Island Lighthouse, click the lighthouse in the above map.

As Griffith Island is privately owned, the lighthouse is best viewed by boat.