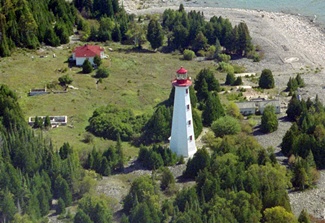 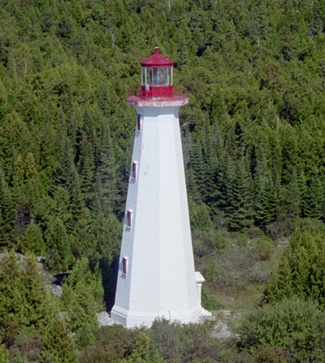 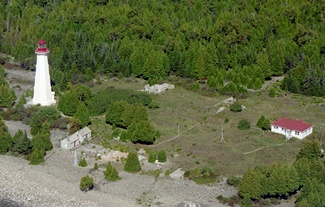 Five in number, the Duck Islands extend nearly ten kilometres into Lake Huron from the southern shore of Manitoulin Island. Great Duck Island is the largest of the five, and the remaining four are named for their location in the grouping: Inner Duck, Middle Duck, Outer Duck, and Western Duck. Mariners were warned that passing between the Duck Islands and between the islands and Manitoulin Island should not be attempted due to dangerous reefs. In 1856, while work on the six stone towers known now as the Imperial Towers of Lake Huron was underway, the Commissioners of Public Works for the Province of Canada noted, If to these be added one on the Ducks Islands, about midway in Lake Huron, and lying directly in the course of vessels making for Georgian Bay, there will be no reason to complain of want of lights on the Canadian shores of Lake Huron. Due to the cost of erecting the six Imperial Towers, construction of a lighthouse on the Duck Islands, as well as five other lighthouses that were part of the contract that included the six Imperial Towers, was postponed indefinitely.

Following Confederation, a lighthouse was finally built on the southwest tip of Great Duck Island in 1876. R.T. Sutton was awarded a $2,475 contract for erecting the lighthouse, and E. Chanteloup was paid $1,854.96 for providing the iron lantern room and a lighting apparatus made up of six lamps and an equal number of twenty-two-inch reflectors. The following description of the new lighthouse, which was placed in operation on June 1, 1877, was published by the Department of Marine:

A revolving catoptric light is shewn, elevated 64 feet above water, and, in clear weather, will be seen from a distance of 13 miles. The light shows one red flash and two white flashes every two minutes, the flashes attaining their greatest brilliancy every 40 seconds. The lighthouse is of wood, painted white, and consists of a square tower, 54 feet high from base of structure to vane of lantern, with a dwelling attached. The sum of $4,367.31 was expended on this lighthouse during the past fiscal year, making, with the amount previously expended, the total cost of construction, including lighthouse apparatus, $4,993.33. Mr. William Purvis was appointed keeper of this lighthouse by Order in Council of the 21st of March last, at a salary of $500, to include allowance for fuel and necessary assistance.

Born in Arborath, Scotland in 1830, William Purvis left home at the age of twelve and spent the next six years traveling the world aboard a trading ship. He spent three years in Scotland after his adventures on the sea, and then immigrated to Canada and settled in Kincardine, where he lived for several years until accepting an appointment to Great Duck Island.

Keeper Purvis had a family of ten children, and he employed their help in clearing the land around the lighthouse to make it less susceptible to brush fires and cutting down trees to the northwest. The Superintendent of Lights paid Purvis the following compliment in 1878: This light and dwelling are kept in a very excellent manner; it is one of the best kept Stations on the lakes. Keeper Purvis sons fished from the Duck Islands, ran a mail and passenger steamer from Gore Bay, and two of them even went to the Klondike in 1898. John Purvis took charge of the light on Great Duck Island when his father retired at the end of the 1897 season. William Purvis and his five sons formed a fishing partnership called Purvis Brothers, and the fifth generation of the Purvis family still runs Purvis Fisheries, based in Burnt Island.

In 1888, John Chamberlain of Collingwood built a fog alarm building 150 feet southeast of the lighthouse under a contract for $1,950. Painted white with a brown roof, the wooden building housed a steam-driven foghorn in duplicate that sounded eight-second blasts separated by thirty-five seconds of silence.

A type F diaphone fog alarm, which was operated by air compressed by oil engines, replaced the steam plant in 1922. The new apparatus, which was established on October 23rd, sounded a two-and-a-half-second blast every thirty seconds.

Keeper Robert J. Leeson and his assistant Raymond Hughson, both veterans of World War II, closed Great Duck Lightstation for the season on December 12, 1949 and set out for the mainland in their twenty-two-foot powerboat with a dinghy in tow. While passing Middle Duck Island, the boats propeller shaft broke, causing the craft to drift helplessly onto rocks near the island. After being tossed into the water and having to wade ashore, the men made a makeshift shelter out of the bedding they had with them and placed their sixteen matches in a crack in a log and waited for the wind to dry them before trying to light even one. The keepers were getting a bit worried when the first nine failed to light, but the tenth one flared up, and soon they had a blazing fire of driftwood.

It snowed more than two feet over the next three days, and the men subsisted on what provisions they had in the boat. Fish! Fish! Fish!.....we boiled it and baked it, and baked it and boiled it for three days straight. I don't know whether I'll ever be able to eat dried fish again, Raymond said. But it was food, and it kept our strength up. We even got so tired of drinking water we brewed ourselves some hemlock tea. It didnt taste like much, but it was a change from water, and it was hot.

When the seas calmed sufficiently, the men rowed to the northern tip of Great Duck Island in the dinghy and then hiked four miles to the lighthouse. First thing we did when we got there was hit the larder, Raymond later recalled. Boy, did we make ourselves a pot of stew.

When no report of the men having reached the mainland was received, a seaplane was chartered from Georgian Bay Airways on the seventeenth by the District Agent and a search was initiated. Flying low over the islands, the men aboard the plane spotted the lighthouse boat on the rocks at Middle Duck but could see no signs of life. At Great Duck, they noted tracks in the snow and after buzzing the station the two keepers emerged from the dwelling. The plane landed near Outer Duck Harbour and took the men and as much of their baggage on board as possible. The stations boat was salvaged the next day, and the following year a radiophone was installed on Great Duck to improve communication with the island.

Great Duck Island Lighthouse was electrified in October 1960, when Frank Rourke was serving as head keeper. Juanita Rourke and her children would travel to the island, often aboard the fish tug Blue Fin owned by Len Purvis, a descendant of the lights first keeper, to spend their summers, but this changed when Frank suffered a heart attack after helping a vessel in distress. Juanita then had to remain on the island with her husband throughout the shipping season. My heart belonged in one home on a rock strewn island among the waters of Lake Huron and in another home standing on a side hill overlooking the town of Midland, Juanita wrote. On the rocky island were my husband and a tall white lighthouse. At the other were my children. Each place had its own beauty and responsibility. Each held the ones I loved. The only trouble was, I had two homes but only one heart.

Douglas Clow, the stations last head keeper, left in 1987, and during the following decade, the islands two-storey residence (built in 1931), fog signal building, and one of the single-storey residences were all torn down. Today, all that remains on the island is the stout, concrete tower and a keepers bungalow. The stations diaphone fog signal plant was removed in 1981 and is currently in storage at the Canada Science and Technology Museum in Ottawa.

For a larger map of Great Duck Island Lighthouse, click the lighthouse in the above map.

Great Duck Island Lighthouse is best seen by boat or from the air.