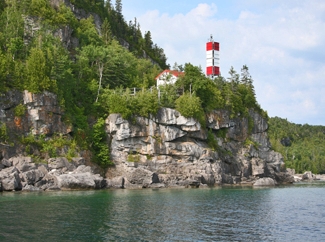 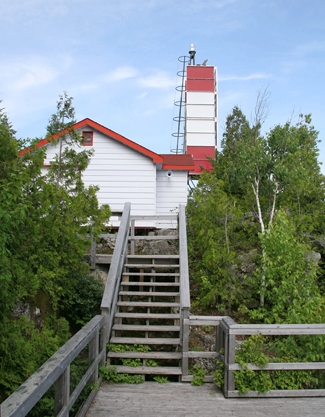 Flowerpot Island, named for its flowerpot-shaped sea stacks which are narrow at the base and larger up top, is situated off the tip of the Bruce Peninsula and is a popular destination for boat tours from nearby Tobermory.

In 1897, the Department of Marine announced that to increase the safety of large and fast steamers entering Georgian Bay a lighthouse and fog bell were being established on the northeast point of Flowerpot Island. J. C. Kennedy of Owen Sound was paid $1,137 to construct the lighthouse, and while work on the structure was carried out, a temporary light was shown from a lens lantern hoisted atop a pole. The lighthouse, a square wooden dwelling with a square wooden lantern rising from the apex of its roof, went into service in late autumn of 1897, showing a fixed white dioptric light of the seventh order at an elevation of eighty-eight feet above the surrounding water. As the lighthouse was just over thirty feet tall, the lights lofty focal plane was mostly due to the cliff, known as Castle Bluff, on which the lighthouse was perched. A fog bell, suspended beneath a gable on the front of the lighthouse, sounded two strokes in quick succession each minute when necessary. Donald Smith, the first lightkeeper to be stationed at Flowerpot Island Lighthouse, was paid $300 a season.

In the fall of 1898, tenders were invited for the erection of a keepers dwelling at the station, but as the offers received were considered too expensive, the project was deferred. The lighthouse site and acreage on the shore for a wharf and boathouse, along with a right-of-way between the two properties, were purchased from the Department of Indian Affairs for $8.64.

During the summer of 1900, a two-storey keepers dwelling was built on the shore by day labour under the foremanship of C. Dobson of Penetanguishene at a cost of $1,397. At the opening of navigation in 1902, the fog bell attached to the lighthouse was replaced by one that was erected on a detached platform and tolled once every seven seconds. The new bell broke down that August, forcing Keeper Smith to sound a hand fog horn until the bell was placed back in operation about a month later.

The stations fog bell, even in its new location, was never considered satisfactory so in 1908 a rectangular fog-alarm building was constructed just east of the lighthouse to house a four-horsepower, one-and-a-half-inch diaphone plant that was purchased from the Canadian Fog Signal Company for $2,400.

In mid-October, 1900, the 127-foot-long schooner Marion L. Breck, bound from Owen Sound to Blind River with a cargo of bricks, ran aground on a shoal while trying to seek shelter from a storm in the lee of Bears Rump Island. Keeper Donald Smith witnessed the drama unfold but was unable to render assistance as his small sailboat was no match for the mountainous waves. Captain Sutherland and his crew were able to escape the wreck and make their way to Bears Rump, where they were rescued two days later by Keeper Smith and his two sons. The Marion L. Breck is just one of more than twenty shipwrecks that attract divers to Fathom Five National Marine Park.

On October 15, 1909, the 270-foot-long Canadian Pacific steamer Athabasca grounded on Flowerpot Island. No one aboard was injured, and two tugs from Owen Sound were able to free the vessel, which sailed to Owen Sound for $40,000 worth of repairs. The steamers crew claimed the lighthouse keeper was responsible for the accident as the foghorn was not sounding, but Keeper Daniel Smith alleged carelessness of the crew, remarking that it was not necessary to keep the fog horn going as the snowfall was only in short squalls. At a marine board of inquiry held a few weeks later, Captain Alexander Brown admitted the accident was due to the helmsman confusing his orders and turning the wheel to port instead of starboard.

William Spears and his wife raised eight children, seven daughters and one son, during the twenty-five years the couple served at Flowerpot Island. When Keeper William Spears passed away in 1937, his son Bill took care of the lighthouse for a few months until Hugh Rumley, a veteran of World War I, was placed in charge of the station. Bill Spears had fond memories of growing up on Flowerpot Island, and he would later serve twenty-seven years as keeper of Cove Island Lighthouse, located just a few miles from his boyhood home.

Bill Spears spent time exploring the caves for which Flowerpot Island is famous and recalls that the keepers would use one located just behind the 1900 keepers dwelling for storing milk, butter, and other perishable items. No meat would be stored there because of flies. We had a cow only one year, Bill remembers. The flies were so bad she went crazy  stormed into the water.

When thunderstorms struck the island at night, the eight Williams children would burrow into their beds in terror as the thunder echoed off the surrounding cliffs and caused the dwellings walls to tremble. Oh I was scared to death, Bill said. Never heard thunderstorms as bad as at Flowerpot.

Besides rattling nerves, thunderstorms caused significant damage at Flowerpot Island on at least one occasion. Audrey Coultis was serving as keeper in the late 1970s, when he and his son John saw a bolt of lightning strike the water off the island, causing it to boil. Keeper Coultis believed that lightning always strikes in threes, and sure enough a second bolt soon hit a patch of bushes behind the generating building, which housed the three diesel generators that had recently been installed to provide electricity. Despite having a full cast on his broken leg, Keeper Coultis rushed to the generating building to kill the power before the lightning honed in on the electrical equipment. His thinking was correct, but he arrived too late to stop the third bolt from melting the control panel, fuse panel, and distribution panel. He just took it in stride and set about calmly dealing with the situation, John recalled, although, after smashing his cast all to hell he did notice his leg hurt a bit.

In 1959, a second dwelling was built for the assistant keeper, who previous to that time had been residing in the lighthouse.

A pyramidal steel tower topped by a light was put in place in 1968, and the following year the old lighthouse, no longer needed, was burned and pushed over the cliff. To improve access to the light, a cement helicopter pad was laid on the site of the fog alarm building.

Flowerpot Island Lighthouse was de-staffed after the 1987 season, and the buildings sat vacant until Friends of Fathom Five, concerned about the deteriorating state of the structures, reached an agreement with the Coast Guard under which they were able to begin restoration work in 1996. A Lightkeepers Host Program was started in 1998 that allows volunteers to live at the station while performing minor maintenance and serving as site interpreters for visitors.

In 2012, red and white dayboards replaced the previous all-white dayboards. The shape of the new dayboards make the tower appear square, but the underlying tower is still the pyramidal tower erected in 1968.

For a larger map of Flowerpot Island Lighthouse, click the lighthouse in the above map.

Flowerpot Island is part of Fathom Five National Marine Park and is accessible by passenger ferry service from early May through mid-October. The Blue Heron Company and Bruce Anchor Cruises offer tours to the island. A museum in one of the keeper's dwellings is open to the public, while volunteer lightkeepers live in the other dwelling. You can get a good view of the lighthouse from the tour boats that pass Flowerpot Island, and you can also take a 1.5-km-hike to the lighthouse from the islands dock if you choose to disembark.

A lens used at Flowerpot Island Lighthouse is on display in the museum located at the visitor centre for Bruce Peninsula National Park.

The lighthouse is owned by the Canadian Coast Guard, and the site is managed by Friends of of the Bruce District Parks Association. Grounds open, tower closed.


I would definitely recommended taking the hike from the boat dock over to the light tower and keepers dwellings. There is a nice museum set up in the old dwelling, where refreshments are also offered, and the hike up to the tower offers a nice view. Along the way, you will also see the flowerpots and an interesting cave.

The visitor centre for Bruce Peninsula National Park is located very close to Tobermory and is certainly worth a visit. A lens used at Flowerpot Island Lighthouse is on display in the centres interesting museum, and you can also climb a tall observation tower for a great view of the surrounding area.