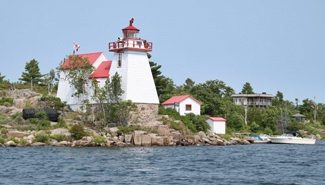 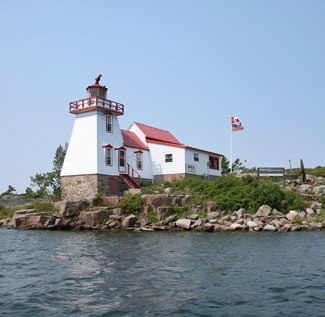 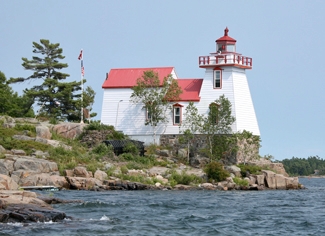 In the 1870s, fur traders from Penetanguishene lost a canoe along the eastern shore of Georgian Bay, and it was discovered the following spring by stranded fur traders, who helped themselves to a barrel of whiskey found in the canoe. After some whiskey-fueled merrymaking, the traders left the empty barrel on the point as a marker, and soon thereafter French mariners started to refer to the place as Pointe au Baril, meaning Barrel Point. The usefulness of the barrel was later improved, when a tradition started wherein the first returning fishermen would light a lamp in the barrel to guide the rest of the fleet back to safe harbour. A portion of the barrel was removed and the lamp placed inside so that its light was only visible when the fishermen were approaching along a safe course.

In 1887, the Department of Marine prepared plans for a set of range lights to lead into the inside passage among the island at Pointe au Baril but then decided to erect better buildings than were first intended. After new plans were drawn up, Charles Mickler, of Collingwood, was awarded a $1,515 contract to erect the range lights, and the resulting lights were first displayed on October 10, 1889. The total expenditure for the range lights, including the illuminating apparatuses, was $2,260.37.

The following description of the lights was published by the Department of Marine:

The outer or front range light building stands upon the southern extremity of Point-au-Baril, close to the water, and consists, of a square wooden tower with kitchen attached. The tower is 32 feet high from the ground to the vane on the lantern. The building is painted white. The light is fixed white, elevated 38 feet above the level of the bay, and is visible 10 miles from all points seaward. The illuminating apparatus is dioptric.

The back range light building stands upon the summit of an island distant 4,800 feet, E. by S. 3/4 S., from the front one. The tower is a square open frame, surmounted by an enclosed frame and lantern, the frame painted brown, and the enclosed portion white. The building is 44 feet high from the base to the vane on the lantern.

The two lights, in range, lead through the channel, the outer light being left on the port hand in entering.

Samuel E. Oldfield was the first keeper assigned to care for the Point au Baril Range Lights, and the lamp and small lens used to produce the fixed white light in the front range can still be viewed inside the lighthouse today. Keeper Oldfield was dismissed in 1897 for engaging in fishing with illegal nets which are wholly prohibited in Ontario waters. Charles McDevitt, of Parry Sound, was appointed to replace Oldfield and received the same annual salary of $300.

In 1903, a steel, skeletal tower, with sloping sides and surmounted by an enclosed watchroom and a square wooden lantern room, replaced the original back range tower. The new tower stood fifty-one feet tall, from base to vane, and exhibited a fixed red light at a height of sixty-two feet above the bay. Gould, Shapley & Muir Company of Brantford, Ontario supplied the steel framework at a cost of $410, and R. Hudson erected the tower under contract for $490. The towers steel frame was painted white, and its wooden portion red.

A year after the new back range tower was erected, white, wooden slats were fastened horizontally on the towers channel-facing side, and trees around the tower were cut down to make the lighthouse more conspicuous.

Even though the second rear tower was taller than the first, Mariners still found it hard to see the back light when approaching the range from outside the reefs that line the channel leading in from Georgian Bay. The 1903 tower was thus taken down and replaced in 1909 by a new four-section, steel, skeletal tower that stood eighty-one feet tall and displayed a fixed red light at a height of ninety-three feet. The new tower was also provided by Gould, Shapley & Muir, this time for $668.50, and George W. White was paid $570 to erect the structure. No longer needed, the 1903 tower was taken to Owen Sound where it was used as the front tower of that range. The enclosed watchroom and lantern room atop the new tower were painted white with a vertical black stripe the side facing the channel.

The Township of the Archipelago has leased the lighthouse property from the Canadian Coast Guard for several years and has hired Emmaline Madigan to serve as keeper of the lighthouse museum. Emmaline is the widow of Carl Madigan, who served as keeper from 1949 until his sudden passing in 1977. When Emmaline married Carl in 1954 at the age of seventeen people said, What do you want to go a live in a lighthouse for? Thought it may be hard for others to understand, she would rather be at the lighthouse than any other place in the world.

After Carls passing, Emmaline carried on in the role of keeper until the light was de-staffed in 1983. For a few years after being forced to leave, Emmaline couldnt go near the lighthouse, and every time she thought of it, she cried. In 2000, the Township and the Pointe au Baril Islanders Association asked Emmaline and her new partner Bill Puglsey to return to the lighthouse. I never thought in the world I'd ever be back again, Emmaline told a reporter in 2005 with tears of happiness streaming down her face as she recalled receiving the news. I couldnt sleep that night. I was so happy that I was going to be coming back home.

Joe Grant, a member of the Ontario folk singing group Tanglefoot (now disbanded) wrote a song entitled Emmaline about Emmaline Madigans life as a keeper. Emmaline now greets all visitors and has many tales of her life at the lighthouse, raising six children there in that small building. Besides caring for her large family, Emmaline also found time to do laundry for cottagers and to bake pies and other treats for a local hotel. If youre lucky, you might get to sample some of her baking during a visit to the lighthouse.

Though the range lights are still very useful for boaters, guiding them along the deep water stretch between very treacherous shoals to the north and south of the channel into Pointe au Baril, they are on the Canadian Coast Guards list of lights to be decommissioned. There is overwhelming support from the residents of Pointe au Baril Village and seasonal residents for the Township of the Archipelago to purchase the lighthouse and the range light. This process has begun with the Township, which has the right of first refusal, making a proposal to the Coast Guard.

Today, the tradition of keeping a barrel on the point continues, just a short distance away from the lighthouse.

For a larger map of Pointe au Baril Range Front Lighthouse, click the lighthouse in the above map.


Meeting Emmaline Madigan was the highlight of my visit to the lighthouse in 2014. She had sold her last baked goods by the time we got there, and apparently you really do need to order ahead if you want to sample any of her baking, though I am not sure exactly how you do that.

Emmaline married Keeper Madigan in 1954, and the last of her six children was born in 1963. During her service, she saw the illuminant for the lighthouse change from oil, to electricity supplied by batteries, to commercial power delivered by a submarine cable. Even before her husband's death, Emmaline was often in charge of the light when her husband was absent from the station doing contracting work.