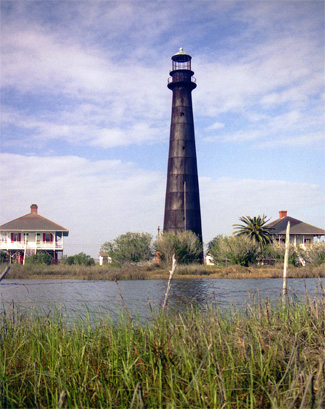 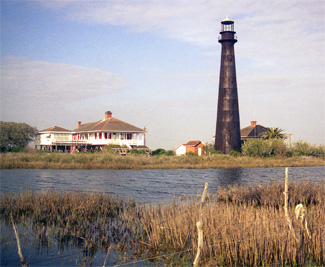 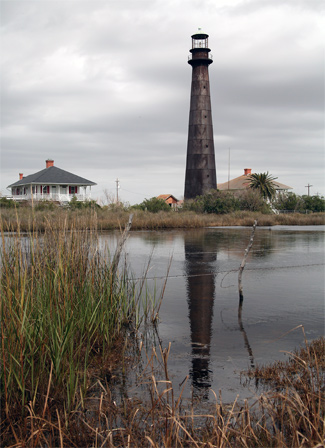 On February 3, 1845, the Republic of Texas earmarked $7,000 for the establishment of a lighthouse on the eastern end of Galveston Island. However, before significant progress was made toward establishing the light, the United Sates annexed Texas, and the federal government assumed responsibility for navigational aids in Texas. Wasting little time, Congress set aside $15,000 in 1847 for the construction of lighthouses at Galveston and at Matagorda Bay. The proposed site for the lighthouse at Galveston was moved from Fort Point on the eastern end of Galveston Island to Bolivar Point, located on the opposite side of the entrance to Galveston Bay, at the western end of the Bolivar Peninsula. Protracted negotiations with the landowner coupled with delays by the Texas government in ceding jurisdiction over the site postponed work on the lighthouse until the fall of 1851. In the meantime, a lightship was deployed at the Galveston bar to mark this most important Texas port.

The iron sections for the sixty-five-foot tower were cast in Baltimore by Murray and Hazlehurst, shipped west, and then erected at Bolivar Point. The keepers dwelling was completed in April 1852, but work continued on the tower, which was painted red, until October. Eighteen lamps, backed by twenty-one inch reflectors, were installed in the tower by Christmas Day, and the light commenced operation shortly thereafter with Aaron Burns earning an annual salary of $600 as its keeper.

During the lights first year of service, the district lighthouse engineer petitioned for a brighter light and additional iron sections to elevate the light. Complaints were also voiced by harbor pilots, prompting the Lighthouse Board to supply a third-order Fresnel lens and an additional twenty-four feet of sections for the tower. These modifications to the tower were completed by the summer of 1858.

Just three years later, Texas joined the other southern states in seceding from the Union. Most of the southern lighthouses were darkened during the Civil War, but Bolivar Point Lighthouse was completely dismantled. Given the dramatic cost increase for iron during the war and the fact that no piece of the original tower has ever been discovered, it is assumed that the iron sections were used as armor plating for ships or were melted down to produce military armaments.

After the war, a temporary thirty-four-foot, wooden tower was hastily established near the site of the original lighthouse, and the light from a fourth-order Fresnel lens was activated on August 5, 1865. On July 15, 1870, Congress appropriated $40,000 for the construction of a second iron tower on the point. The Lighthouse Board decided to pattern the new station after the one at Louisianas Pass a lOutre, which consisted of a 117-foot iron tower and a wooden keepers dwelling. The new tower was provided by Bailey and Debevoise of New York City for the sum of $25,850, while William F. Crow and Company of Galveston were contracted to construct the dwelling. The lamp in the stations third-order Fresnel lens was first lit for mariners on November 19, 1872. The new tower was painted with black and white horizontal bands to provide a distinctive daymark.

Mariners soon complained that the new beacon was not as bright as the original 1852 light. The district engineer concluded that the lens was defective, reporting that it had little or no magnifying power and had a smoky cast or appearance. The anchor lights of vessels in the harbor were reportedly more brilliant than the lighthouse, and a powerful second-order lens was installed in 1882 to remedy the problem.

The effectiveness of the towers light wasnt the only problem at the station, as the keeper and his assistant were accusing each other of negligence and impropriety. Assistant Keeper Edson C. Brace complained that Keeper Horace W. Crockett was an irascible, drunken, partly-demented man, who had threatened physical violence, while Crockett charged Brace of failing to maintain a proper light and exposing himself to a passing train. The district inspector arrived to investigate the situation, and shortly thereafter Brace resigned and Crockett retired to operate a store he owned in Port Bolivar.

Harry C. Claiborne, known as the best keeper in the district, was appointed keeper at Bolivar Point to replace the problematic pair of keepers. Claiborne began his twenty-four years of service at Bolivar Point Lighthouse on December 15, 1894, transferring from the lighthouses twin at Pass a lOutre. As a sign of appreciation for his faithful service, Keeper Claiborne was sent to Atlanta for a month during the fall of 1895 to take charge of a lighthouse exhibit that was part of the Cotton States and International Exposition. The exhibit included two Fresnel lenses, a fog bell, and models and photographs of various lighthouses.

Describing the couples existence at the station, Virginia Claiborne, wife of Keeper Claiborne, remarked: Life at the lighthouse was very lonely and friendless. There is very little visiting because travel is nonexistent from the point to Galveston. We pass most of our time by reading books. While her description surely applied to most of their stay at the lighthouse, it certainly wasnt the case when hurricanes struck Galveston in 1900 and 1915.

The Great Hurricane of 1900 inundated Galveston Island with five feet of water, destroying much of the city and killing nearly 6,000 people. At the height of the storm, which occurred during the evening of September 8, over 120 people sought protection in the iron lighthouse. Seated by twos on the towers spiral staircase, the refugees huddled together as 120-mile-per-hour winds rocked the tower. A bucket was used outside the top of the lighthouse to catch rainwater to quench the thirst of those in the tower, but amazingly the water was found to be salty, meaning that spray from the gulf was mingling with the rain at a height of 130 feet. After the floodwater receded from the base of the tower, the occupants exited the lighthouse to discover the bodies of a dozen people, who were unable to reach the safety of the tower. The Claibornes fed the hungry crowd until their lighthouse rations were depleted.

A similar scene played out during the hurricane of August 16-17 1915, when sixty people from the vicinity were forced to seek protection on the towers spiral staircase. Assistant keeper James P. Brooks, who stood watch in the lantern room during part of the storm, reported that the top of the tower shook and swayed in the wind like a giant reed.

The following account of the storm is from the Galveston Daily News:

At 9.15 oclock Monday night the mechanism which rotates the lantern was put out of commission by the furious swaying of the tower, and from that time until 10 oclock Mr. Brooks turned the big lamp by hand, clinging to the crank and working away as best he could while the wind rose higher and higher, and the tower ever swayed wider and wider in its teeth.

At 10 oclock the vibration was so great that it became impossible to keep the lamp rotating at all. Mr. Books accordingly trimmed the mantles of the lantern and left it burning. Descending to the foot of the tower he found another hazardous task awaiting him. The water had risen until it was neck deep over the tower floor and the big iron door which gives entrance at the base had been dashed open by the wind. It became necessary to get this door closed to protect the tower from the wash of the current and Mr. Brooks, armed with a rope, essayed to make fast the barrier. He was badly battered and bruised by the wind and waves before the task was accomplished, but it was done at last.

The damage inflicted on the station by this storm was more severe than that of 1900. The assistant keepers dwelling, all fences, the oil house, and all outbuildings were destroyed, while the keepers dwelling was washed off its foundation into a hole and its rear portion was swept away. After exhausting the supply of oil kept in the tower, the light went dark for two nights, until a new shipment of oil reached the station.

A temporary structure was erected to house the keepers. When the stations two new dwellings were built, they were wisely placed on iron pilings to keep them above any future storm surge.

Through some miscalculation, Bolivar Point Lighthouse was bombarded in dense fog on November 15, 1917 by the three-inch guns at Fort San Jacinto during two hours of target practice. One projectile tore a hole through the tower at a height of about twenty-five feet above the base, while another struck just outside the front yard gate of the assistant keepers dwelling.

As plans developed for Galveston Jetty Lighthouse, the signature of Bolivar Point Lighthouse was changed in 1907 from a fixed, second-order light, to a flashing, third-order light. After numerous delays, the jetty light became operational in 1918, the same year James P. Brooks became head keeper at Bolivar Point upon the death of Harry Claiborne. Keeper Brooks received the lighthouse efficiency flag for having the best-kept station in the district in 1918, 1920, and 1922.

When the candlepower of Galveston Jetty Lighthouse was increased in 1930, the Lighthouse Commissioner recommended discontinuing Bolivar Point Lighthouse. Public outcry prolonged the life of the lighthouse, but a few years later, with the Lighthouse Service feeling the effects of the depression, the iron tower went dark on May 29, 1933.

The lighthouse was transferred to the war department in 1935, and in 1947 the war assets administration sold the property for $5,500 to rancher Elmer V. Boyt, whose family still owns the lighthouse. Though the tower is off-limits to the public, the towers third-order Fresnel lens can be seen at the Smithsonian's National Museum of American History in Washington D.C.

In 2000, a century after Keeper Claiborne helped over 100 people take refuge inside Bolivar Point Lighthouse, the Coast Guard named one of its 175-foot buoy tenders the Harry Claiborne to honor the keepers many years of faithful service. Appropriately, the buoy tender is stationed in Galveston.

In 2015, Mark Boyt and Michael Maxwell, descendants of the first private owners of Bolivar Point Lighthouse, established a foundation to work towards the restoration and preservation of the lighthouse. The foundation contracted a condition assessment of the lighthouse in 2018 that determined $2.5 million would be needed to restore the lighthouse. The top priority is to replace the lantern room, which is in danger of toppling in high winds.

For a larger map of Bolivar Point Lighthouse, click the lighthouse in the above map.


If you take the ferry between Galveston and Port Bolivar, look for the buoy tender Harry Claiborne, which is stationed at the Coast Guard facility in Galveston. The vessel was named in honor of the valiant keeper, who provided refuge in his iron lighthouse for nearly 200 people during the hurricanes of 1900 and 1915. By the time we saw the ship, it was too late to get a good picture.

The Bolivar Point Lighthouse starred in the made-for-TV movie My Sweet Charlie, starring Patty Duke and Al Freeman, Jr. When lighthouses appear in movies, it is typically for just a second or two, but the Bolivar Point Lighthouse plays a leading role in this film. Almost the entire movie takes place at the lighthouse, where a racist white southern girl and a black lawyer on the run both seek refuge in one of the keeper's dwellings. I had a hard time finding this movie, and finally ended up obtaining a used copy through the internet. It is definitely worth watching.


This is one of those lighthouses that you are tootling down the road and boom! the lighthouse is right there bigger than life off the main road. Although we didn't experience the racial elements of the movie, that heavy rain is very real and part of our first experience as well. Make the trip, rain or shine. You will love it.