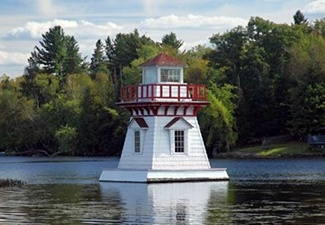 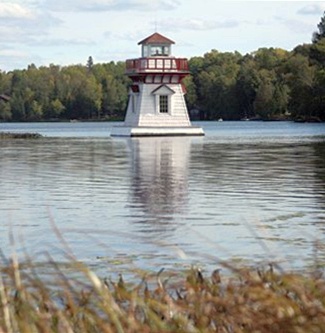 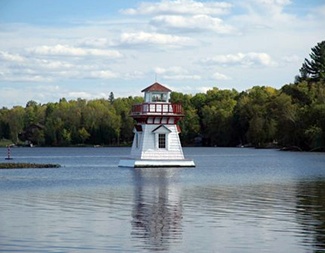 Up until the early twentieth century, the scattered settlements along the Magnetawan River waterway system relied heavily on riverboats for mail, food, supplies, and transportation. Originally, the riverboats coming from Burks Falls unloaded at the rapids at Magnetawan, where the river exits Cecebe Lake and flows into Ahmic Lake. Goods and passengers were then portaged around the rapids and reloaded on another boat to continue to Ahmic Harbour.

Starting in 1883, horses and manual labor were used to construct the locks and wing dams at the Magnetawan rapids, using stone cribs and timbers. When completed in 1886, the locks measured 112 feet long by 10.5 feet wide and enabled boats to transit the entire thirty-five-mile route between Burks Falls and Ahmic Harbour.

In 1905, Cecebe Lake Lighthouse was constructed to mark the entrance to the locks. Boat captains would signal the lockmaster of their arrival with three whistle blasts as they passed the lighthouse. The Department of Marine provided the following description of the lighthouse in its annual report for 1905:

A lighthouse on a cribwork pier was erected on a shoal, about 1 1/2 miles from Magnetawan village, Lake Cecebe. The tower is an inclosed wooden building, square in plan, with sloping sides, surmounted by a square wooden lantern, and is 23 feet in height from its base to the top of the ventilator on the lantern.

This work was done by days' labour, under the superintendence of Capt. J. Mortimore, of Burk's Falls, Ont.

John Schade served as the first keeper of the lighthouse followed by Robert Nicholson. Each evening during the navigation season, the keeper would row out to the lighthouse and light the fixed white light, which was visible for three miles, and then extinguish it the following morning. An unwatched light was installed in the lighthouse in 1927.

By 1930, the steamboat era on the Magnetawan River ended, and the lighthouse, no longer needed, was eventually demolished.

In 1995, the Magnetawan River Heritage Association had a replica built of the original Cecebe Lake Lighthouse. The reproduction is located above the dam and locks in Cecebe Lake, where the original once stood.

For a larger map of Cecebe Lake Lighthouse, click the lighthouse in the above map.

From Magnetawan, drive east on Highway 520 for 1.3 km (0.8 miles) to Lakes End Park. This is a private campground, but the owners allow visitors to view the lighthouse, which is just offshore from their property, as long as they check in at the office.