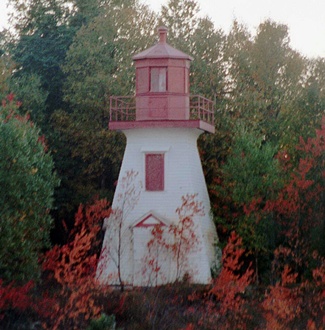 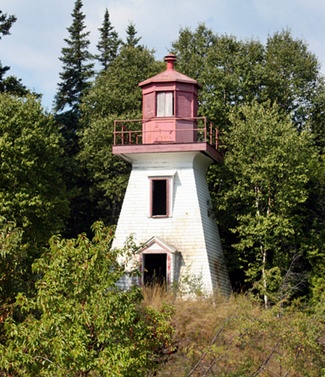 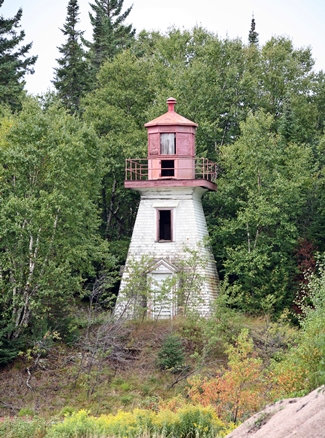 Coppermine Point was so named due to the attempts to extract copper ore from the area that began in the late 1700s. Charles Roussain, a bateaux leader with the Hudsons Bay Company, settled at Coppermine Point in 1845 and for more than a century his descendants made a living fishing the eastern shore of Lake Superior. A small private cemetery at Coppermine Point contains the graves of twenty-four members of the Roussian family, interred between 1852 and 1911.

At the opening of navigation in 1901, the Algoma Central Steamship Line, which operated a fleet of lake boats that transported iron ore from Michipicoten Harbour to Sault Ste. Marie, established a light on the extremity of Coppermine Point of the following description:

The light is fixed white, shown from a lens lantern, elevated forty-six feet above the water of the lake, and should be visible twelve miles from all points of approach; the illuminating apparatus is dioptric of the seventh order. The lantern stands on the top of an open framed, square, pyramidal, wooden tower, standing upon the bluff at the northwest extremity of Coppermine point. The tower is twelve feet high to the table on which the lantern stands, and is whitewashed.

The Department of Marine assumed responsibility for the light on Coppermine Point in 1904, hiring John Joseph Roussain to serve as its keeper. Born in 1846, John Joseph was the son of Charles Roussain and kept the light until his death in 1909, whereupon his son Frank Edmund took charge of the light.

On the night of September 15, 1908, the light from a permanent lighthouse was exhibited on Coppermine Point, and the open-frame, pyramidal tower topped by a lantern was removed. The new Coppermine Point Lighthouse was a wooden building, square in plan, with sloping sides and surmounted by an octagonal iron lantern. The tower measured thirty-two feet from its base to the top of the ventilator on its lantern and was erected under contract by J.C. Kennedy of Owen Sound for $1,200. A fifth-order French lens was used in the new lighthouse to display a light at a height of sixty-one feet above Lake Superior.

Around September 1, 1923, the fixed white light at Coppermine Point was replaced by an unwatched acetylene light that was automatically occulted at short intervals.

The steamer Cottonwood, carrying 2,000 tons of copper sand, ran aground off Coppermine Point on November 15, 1926 during a sixty-five-mile-per-hour gale. The crew lowered a lifeboat and reached Roussains fishing station at Point Mamainse, where they found shelter in huts. D.H. Giddings, mate of the Cottonwood, and one of the employees of the fishing station made it to Sault Ste. Marie in a gasoline launch on the nineteenth after having been forced to take shelter at Batchawana Bay, and food and other supplies were rushed north that evening.

Circa 1969, Coppermine Point Lighthouse was moved roughly three kilometres north along Highway 17 from Coppermine Point to Hibbard Bay, where it became part of a restaurant complex that is no longer standing. Today, a cylindrical mast with a red and white rectangular daymark displays a white flash every four seconds at Coppermine Point.

For a larger map of Coppermine Point Lighthouse, click the lighthouse in the above map.

From Sault Ste. Marie, take ON-17 (Trans-Canada Highway) north and continue for 86.4 km (54 miles) to Hibbard Bay, where you will find Coppermine Point Lighthouse alongside the highway.