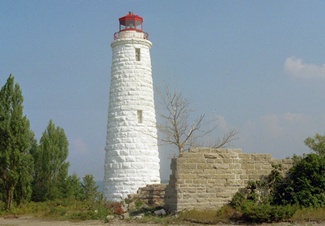 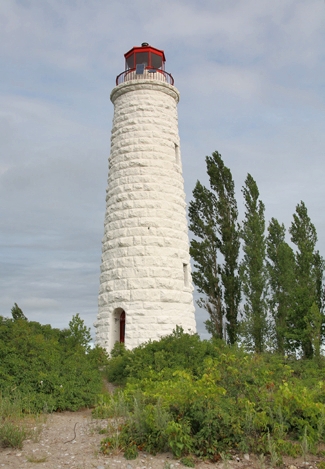 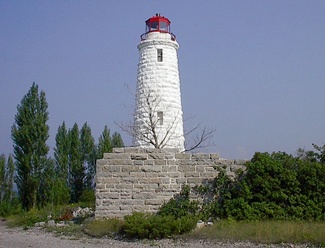 Founded by French Jesuits in 1639, Saint-Marie among the Hurons was the first European settlement in Ontario and served as a fortified base for missionaries working near present-day Midland. Over the next decade, eight Jesuit missionaries were killed during the struggle between the Iroquois and Hurons for control of the land surrounding the Great Lakes, including Jean de Brébeuf and Gabriel Lalemant, who were ritually tortured and killed at St. Ignace in March 1649. The bodies of Brébeuf and Lalemant were recovered and buried at Saint-Marie among the Hurons, but when the missionaries decided to abandon and burn the mission in June 1649, they dug up the bones of Lalemant and Brébeuf and took them with them Thousands of Hurons and a few Jesuit missionaries from Saint-Marie among the Hurons took refuge on a nearby island in 1649, but most of them left the area in 1650 for Quebec after nearly starving during the previous winter. The eight missionaries slain by the Iroquois were canonized by Pope Pius XI in 1930 and are now known as the Canadian Martyrs.

In the nineteenth century, a trio of islands off Midland, including the one that served as a temporary refuge for the Hurons and Jesuits, were christened the Christian Islands in honour of the Canadian Martyrs, with the individual islands being named Faith, Hope, and Charity. Today, the largest of the islands, the one that served as a refuge, is known as Christian Island instead of Charity Island, while Faith Island is known as Beckwith Island, and Hope Island has retained its nineteenth-century name.

With a protective arm of land that extends toward the mainland, Christian Island has long been known to offer excellent anchorage. This fact was noted by songwriter Gordon Lightfoot in his song Christian Island that begins:

I'm sailin down the summer wind,
I got whiskers on my chin,
and I like the mood Im in,
as I while away the time of day,
in the lee of Christian Island.

In its report for 1852  1853, the Commissioners of Public Works for the Province of Canada noted the need for additional lighthouses:

Captain MacGregor, who had commanded a steamboat on Lake Huron for several years, and Honorable W.B. Robinson suggested the construction of nine lighthouses, including one on the southeast tip of Christian Island, to serve mariners on Lake Huron, Georgian Bay, and the North Channel. In 1855, John Brown, a builder from Thorold, was contracted to erect eleven lighthouses, but only six of them were built at that time. These six lighthouses, built at Nottawasaga Island, Christian Island, Cove Island, Griffith Island, Chantry Island, and Point Clark, are now known as the Imperial Towers and are enduring landmarks along Lake Huron and Georgian Bay.

John Brown was renowned for his skill and fine workmanship, but difficulties in completing the towers on such remote and inaccessible sites made the project a money-losing affair for him. The 1855 season was well advanced before Brown was able to assemble workers, materials, and the steam and sailing craft needed to carry out such an ambitious undertaking, but by the end of that year, significant progress had been made at Nottawasaga Island, Christian Island, and Cove Island, and quarries were being examined for the other three lighthouses.

During 1856, the one-and-a-half-storey dwelling house and tower on Christian Island were finished, save for the installation of the lantern and lighting apparatus, which were provided by the Parisian manufacturer Louis Sautter. Overall, the work on the six lighthouses suffered a serious setback that season as two steamers and a schooner were totally wrecked, and much timber was lost.

A temporary light was established atop Christian Island Lighthouse during 1857, and the Commissioners of Public Works announced: [The lighthouse] stands on the south-east part of the Island, and on the west side of the southern entrance to the Harbour, which is one of the best on the Lakes. This Harbour is well sheltered, has an entrance from the south with not less than 16 feet of water, and one from the north with considerable depth; in the Harbour itself the water runs from 5 to 12 fathoms. This light serves also for a leading light for vessels proceeding to Penetanguishene, Sturgeon Bay, Cold Water, &c.

Though Christian Island Lighthouse was essentially finished in 1856, the fixed white light from its fourth-order Fresnel lens was not displayed until May 1, 1859, making it the last of the six Imperial Towers to be officially activated. The limestone lighthouse stands fifty-five feet tall from its base to the centre of its light, which has a focal plane of sixty-one feet above the water.

William Hoar, the first keeper of Christian Island Lighthouse, was born in Devonshire, England in 1809 and joined the navy at the age of sixteen. During his twenty years at sea, he served aboard several brigs and was aboard the H.M.S. Britannia in 1841 during the capture of Ste. Jean dAcre during the Syrian War. After being discharged from the Navy, Hoar relocated to Penetanguishene in 1844 and served aboard the government steamer Mohawk before being appointed keeper through the influence of Honourable W.B. Robinson, who had recommended the construction of the lighthouse.

Keeper Hoar served as keeper for over a decade and started a legacy of lightkeeping in the Hoar family. John Hoar took charge of the light upon his fathers retirement in 1868 and served as keeper until 1891, when he swapped positions with the keeper of nearby Hope Island Lighthouse. William Hoars daughter wed Captain George Huff, who was commander of the local steamer Georgina. The Huffs later moved to British Columbia, where their daughter Minnie married Thomas Patterson, keeper of Cape Beale Lighthouse. Minnie Patterson received much notoriety for the heroic part role she played in the rescue of the crew of the Coloma in 1906.

After visiting the lighthouse in 1878 during his annual tour of supply and inspection, Darius Smith, the Superintendent of Lights above Montreal, noted the following: The wall of this lighthouse is cracked from near the top to the bottom; keeper thinks the foundation has given away; it should be examined at once by a competent person; it needs some protection from the sea, as the beach has been washed away considerably; it will require 60 or 70 cords of stone to protect it; it also wants whitewashing. No further mention is made of the foundation, but a breastwork protection, with groins, was built to protect the lighthouse in 1887 at a cost of $213.20.

Christian Island Lighthouse was discontinued on April 1, 1922 after being replaced by an offshore buoy, and during World War II, its iron lantern room was scrapped to support the war effort. In 1965, the Coast Guard placed a beacon that displayed a white flash every four seconds atop the lantern-less tower, and in the early 2000s, the tower was given a lantern room, returning the historic tower to its proper appearance.

In 2007, the Huronia Lightstation Preservation Society hosted an event commemorating the 150th anniversary of Christian Island Lighthouse. Participants were allowed to climb the tower, which is normally closed to the public, and a commemorative plaque with following inscription was unveiled.

The first of the Imperial Tower lighthouses to be completed and the first official lighthouse on Lake Hurons Georgian Bay. Constructed in 1857, it was one of 6 similar lighthouses commissioned by the province of Canada West. These lights were strategically positioned to mark the busy yet treacherous trade routes that had become established on the bay. The lighthouse and the keepers residence were contracted to stone mason John Brown of Thorold Ontario. Brown was renowned for his fine workmanship, winning medals for innovation in plaster and cement at the 1855 Paris Worlds fair.

The light was built upon a timber crib and stands 55 in height to the focal plane. Its walls are constructed of hand faced limestone 6 feet thick at the ground level. The stone was quarried from the nearby Niagara Escarpment and delivered to the site by sailing vessels, several of which were lost to severe weather before reaching their destination. The original lantern room was designed and fabricated by the Louis Sautter Company of Paris France and housed a state of the art Argand lamp fixed within a 4th order Fresnel Lens.

Today, Christian Island and neighboring Beckwith and Hope Islands are an Indian Reserve for the Beausoleil First Nation, and Christian Island is home to roughly 700-year-round residents. Sainte-Marie Among the Hurons Mission was designated a national historic site of Canada in 1920, and following archaeological investigation in the 1940s and 1950s, the mission was reconstructed in 1964. Guided tours of the mission with costumed staff are available in season.

For a larger map of Christian Island Lighthouse, click the lighthouse in the above map.

Ferry Service to Christian Island is available from Cedar Point. Once on the island, from O Gema Street take your second left, Kate Kegwin Street, and follow it for 6.5 km (4.1 miles) to its end, where you will find Christian Island Lighthouse.


While you are in Midland, I would recommend a visit to Martyr's Shrine, which honours the eight Jesuit Saints who lived, worked, and died in the area in the 1600s. Besides the impressive Shrine Church, there are seventy-five acres of landscaped grounds with picnic tables and a monument that commemorates the 1984 visit of Pope John Paul II.