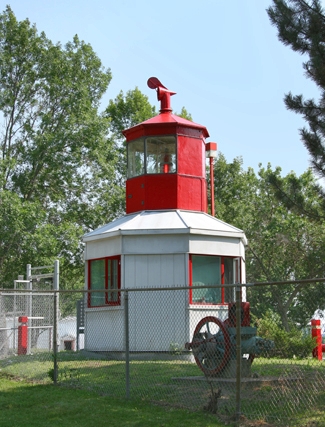 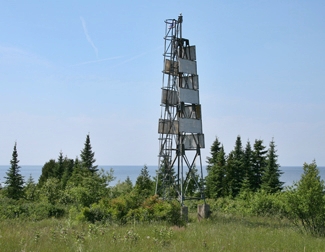 The first lighthouse to be built on Manitoulin Island was at Little Current, where a pair of range lights was established in 1867. Over the next two decades, six more lighthouses were added to the islands shores, with tenders for the last two of these, those at Cape Robert and Manitowaning, being invited in 1883.

During 1884, John Waddell of Kingston was awarded a $9,023 contract for the construction of lighthouses at Cape Robert and Manitowaning on Manitoulin Island, along with three lighthouses for the western end of the North Channel near St. Joseph Island. When Waddell failed to carry out his contract, the Department of Marine was obliged to complete the works at his expense.

Cape Robert is situated on the north shore of Manitoulin Island, near its western end, and forms the west side of the entrance to Bayfield Sound. Built during 1884, Cape Robert Lighthouse consisted of a square, wooden tower that stood forty-one feet high from its base to the vane atop its lantern and had a small dwelling attached to it. A fixed white light, which could be seen for up to twelve miles, was displayed from the tower on the northern extremity of the cape, and Arthur K. Besbitt was hired on November 24, 1884 to place the light in operation at the opening of the following season.

On June 22, 1885, Keeper Nesbitt and another man were wrestling when Nesbitt suffered a heavy fall. Although he got up apparently none the worse for the fall, Nesbitt died about an hour later at the age of fifty-two. Twenty-three-year-old William Nesbitt, the oldest of Keeper Nesbitts nine children, assumed responsibility for the lighthouse, but his service was also cut short by a premature death when he drowned in July 1895 after he slipped and fell into the water while going between his boat and Thorburns dock. Robert G. Nesbitt, Williams brother, looked after the light for a short time before J.R. Thompson was made keeper.

The longest tenured keeper at Cape Robert was Norman Matheson, who took charge of the light in 1896 and served until his passing in 1922 at the age of eighty-two. Keeper Matheson was born in Cape Breton and moved to Goderich when he was a young man. In 1881, William relocated to Manitoulin Island, where he worked for the Gauthier Fish Company, first on the Duck Islands for two years and then at Cooks Dock on Manitoulin. William and Betsey Matheson raised twelve children, and Betsey was listed as keeper of the light for several months after her husbands passing before Frank Sinclair took over. Keeper Sinclair served fourteen years at Cape Robert, then worked for the next twenty at the lighthouses on Badgeley Island and at Killarney.

A proper road to Cape Robert wasnt completed until the 1940s, so before this time keepers accessed the lighthouse by boat, which could be tied up at the stations pier in calm weather or drawn into the boathouse using a windlass. During most of his service, Keeper Matheson preferred to live at his farm on Elizabeth Bay, so he would sail the fifteen miles to the light each day to tend the light. One evening, Betsey Matheson wanted to get word to her husband about a death in the family, so she dispatched her nine-year-old son, who took a horse and buggy along the shore and then walked the last few miles on the rocky shore with only the light of a small lantern to guide him. As he approached the lighthouse, he observed a pair of large yellow eyes staring at him. He hollered and swung the lantern to scare away the monster, which bounded and landed in the water next to him. So terrified was the lad that he could barely climb the eighteen-foot-high clay bluffs to reach the lighthouse. And the deer was likely just as spooked.

Two of the last keepers to serve at Cape Robert, William Rumley and Frank Fowler, came from Great Duck Island Lighthouse, and the capes fixed light and hand-powered foghorn were a welcome change from the revolving light and powerful foghorn at Great Duck. Keeper Fowler was a veteran of World War I, having served in the Canadian Expeditionary Force in France from 1916 until 1919. After the war, Frank settled in Killarney and fished commercially for a couple seasons before starting his lightkeeping career on Badgeley Island. Frank and his wife Winnifred had eight children. Two sons were killed overseas in World War II, but a third son, Gerald, later recalled that in 1948 he helped build a detached bungalow at Cape Robert to improve the keepers living conditions.

Gerald also remembers that getting drinking water at the station could be problematic. The clay bluffs often muddied the water near the station, so the Department of Transport constructed a cistern, at the urging of the keeper, to catch rainwater from the lighthouses roof. This collection system worked fine, but the water in the cistern was found to be contaminated by chemicals used in the shingles.

Light Lists show that the original Cape Robert Lighthouse remained standing through at least 1970, but at some point thereafter, it was demolished and replaced by a metal tower. Some historic remnants of the station do remain, however, as the original lantern room was saved and incorporated into a guard shack at the entrance to the Coast Guard station in Parry Sound, and the 1948 bungalow was moved to Silver Lake for use as a cottage.

For a larger map of Cape Robert Lighthouse, click the lighthouse in the above map.

From the Trans-Canada Highway (ON-400) east of Parry Sound, take Exit 224 and drive west on Bowes Street. After 2.4 km (1.5 miles), Bowes Street will become Seguin Street, which in turn will become Waubeek Street after 550m (0.3 miles). After 350m on Waubeek Street, turn left where you see the sign for Canadian Coast Guard Parry Sound Base. You will find the lantern room for Cape Robert Lighthouse perched atop a guard shack at the entrance to the Coast Guard Base.

It is possible to drive to the modern tower located on Cape Robert. From Highway 540 near the western end of Manitoulin Island, turn north on Sheshegwaning Road and drive 5.5 km to the centre of the village. Turn right on Beach Road, and then left onto Cape Robert Road, which you can follow to reach the light on Cape Robert. We stopped at the gas station/convenience store in the village to check on road conditions before heading out to the cape.