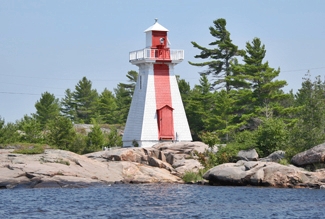 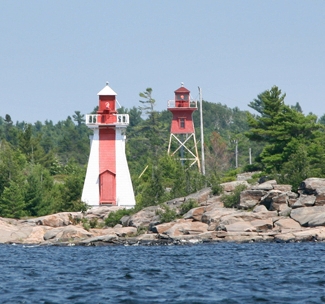 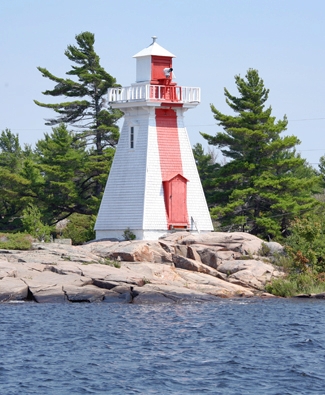 The Magnetawan River flows from Magnetawan Lake in Algonquin Provincial Park through Lake Cecebe and Ahmic Lake before finally emptying into Georgian Bay at Byng Inlet. Magnetawan is an Ojibwa word meaning swiftly flowing waters, and true to its name, the river does have several sets of rapids. The river served as an important waterway for the lumber industry, helping funnel timber to Byng Inlet where it could be milled and shipped to other ports on the Great Lakes.

Henry Wolsey Bayfield was appointed the admiralty surveyor for North America in 1817, and over the next few years, he surveyed Georgian Bay as part of his work on three of the Great Lakes. Bayfield named Byng Inlet in honor of John Byng, a Royal Navy officer who was court-martialed and executed by firing squad for failing to do his utmost to prevent the island of Minorca from falling into the hands of the French. Many felt Byng was used as a scapegoat by the Admiralty, and he posthumously gained favour in the eyes of the Royal Navy and his countrymen.

The town of Byng Inlet was established at the mouth of the Magnetawan River in 1869 as a lumber town, and over the next half-century a number of companies operated mills on the inlet. At its peak, Byng Inlet had the second largest sawmill operation in Ontario, and the town boasted several hotels, a theatre, post office, bakery, and a school.

The sawmill company operated the light until May 1, 1875, when the Department of Marine took over. The Departments annual report for 1876 provides the following information on the lighthouse:

Who has been in charge for the last three years. There are four base-burner fountain lamps, and four 16-inch reflectors on their stands. The lantern is of iron, four and one-half feet in diameter. The glass is 13 x 21 inches. The tower consists of a trellis work, 73 feet high, braced with iron wire rope, bolted into the rock. The lantern requires to be raised three or four inches, and the platform to be boarded over and then covered with canvas, and painted. The top of the lantern requires puttying and painting. The position is a very exposed one, and the light is one of the most difficult ones on the lakes to keep, as in stormy weather there is no shelter for man or boat at the lighthouse.

A small room is much required at the base of the tower to shelter the keeper in stormy weather, when he cannot get on shore. He requires a new boat, which I ordered him to get, as he has an opportunity of getting it very cheap.

Just two years later, Darius Smith, Superintendent of Lighthouses above Montreal, visited Byng Inlet and found that the lighthouse was in very poor condition. Its main posts, composed of two-inch plank nailed together, were partially rotten, and the eight-year-old structure was deemed unworthy of extensive repairs. A dwelling house, measuring eighteen by twenty feet, had been built for the keeper by this time, but it was found in need of plastering or lining as it was too cold in the winter, being built of single boards.

Parliament appropriated funds for a new lighthouse at Byng Inlet in 1879, and the following year, P.J. Sylvester built the present square, pyramidal tower with attached dwelling on Gereaux Island. The lighthouses fixed white light, which was exhibited at a height of forty-seven feet above the water, was placed in operation in October 1880. The Maganettawan Lumber Company was being paid to maintain the light at this time and continued in this role until April 1883, when James Milne was hired as keeper. Keeper Milne resigned after just one season, and Joseph Lamondin was placed in charge of the light. Keeper Lamondin and his two sons Louis and Charles cared for the light for the next sixty-two years.

Between 1883 and 1893, Staff Commander John G. Boulton of the Royal Navy conducted another survey of Georgian Bay and suggested that a pair of range lights be erected to more accurately indicate a clear channel into Byng Inlet. Charles L. White was awarded an $895 contract in 1899 to erect a pair of towers to mark the range line selected by Boulton. The range lights were placed in operation shortly after the opening of navigation in 1900, and the Department of Marine provided the following description of the new range that year:

The front range light building stands close to the channel, on the south side, three-quarters of a mile north-east by east, one-quarter east, from the light previously established on Gereaux Island. The light is fixed red, elevated 34 feet above the water, and should be visible 8 miles over a small arc on each side of the line of range. The illuminating apparatus is catoptric. The light building is a square wooden tower painted white, 33 feet high from its base to the vane on the lantern.

The back range light is distant 1,520 feet, E. by N. from the front one. It is fixed white, elevated 60 feet above the water, and should be visible 13 miles over a similar arc. The illuminating apparatus is catoptric. The tower is a square wooden open-framed building, painted white. The lantern and upper story are enclosed, and the side facing the range is slatted for some distance farther down, so as to render it more conspicuous as a day beacon. Its height from the ground to the vane on the lantern is 49 feet.

The two lights in range, bearing E. by N., lead into the mouth of Byng Inlet, with nowhere less than 4 fathoms water, clearing Magantawan Ledges on the south and Burton Bank on the north side.

The total expenditure in connection with the establishment of these range lights has been $1,449.08.

Gereaux Island Lighthouse remained in operation as a coastal light after the activation of the range lights, and its keeper gained the added responsibility of the two new lights. In 1911, a fourth-order lens illuminated by petroleum vapour burned under an incandescent mantle was installed in Gereaux Island Lighthouse in place of a catoptric apparatus consisting of five mammoth lamps and reflectors.

In December 1924, the Greenville, a lighthouse supply vessel used in the Parry Sound agency since 1918, was headed for Byng Inlet when it ran aground on Burton Bank. Unable to make out the Byng Inlet Range Lights due to a blinding snowstorm, Captain Smith was anxiously searching for the light on Gereaux Island Lighthouse, when his vessel struck solid rock. It turns out there was a good reason he couldnt see the light  it was out. Reaching Gereaux Island by lifeboat, Captain Smith climbed up to the lighthouse, where he met an astonished keeper approaching from the other side.

Keeper Charles Lamondin, who lived alone on the island, had run out of food, and, in danger of starving, had gone to the nearest town for supplies. During his absence, the light flickered out and left the Greenville without a much needed reference point. Keeper Lamondin was subsequently fired, but one must have sympathy for a man working under such conditions. Louis Lamondin, who had been keeper of the light before his brother Charles took over in 1918, was appointed keeper once again and remained on the island until 1946.

Badly holed and partially flooded, the Greenville remained stranded until the next spring, when she was towed off to drydock. Two of the passengers aboard the Greenville were Keeper David Mountnay and his wife who had just been picked up after closing up the lights on Bustard Rocks for the season. The Greenville returned to duty after repairs and remained in service until 1968, when she was caught in an ice floe and swept against a bridge abutment.

In 1936, a skeletal tower was erected to take the place of the wooden tower that had served since 1890 as the back light for the Byng Inlet Range.

A detached keepers bungalow was added to Gereaux Island in 1966 in order to provide housing for the additional keeper required to help run the stations new foghorn and radiobeacon. To aid mariners during periods of limited visibility, the foghorn sounded a two-second blast every twenty seconds, and the radiobeacon transmitted the letter J.

Art Niederhumer, the last resident keeper on Gereaux Island, served from 1978 to 1989, when the lighthouse and range lights were automated. Keeper Niederhumer had over 200 people sign the stations guestbook each year, with some coming from as far away as New Zealand and Kenya. The way I looked at it, it was a government job on government property, Niederhumer said, and the people paid taxes and had the right to look at the island.

For a period of at least twenty years, the light on Gereaux Island was displayed from a skeletal tower near the historic lighthouse, but the light is now once again where it belongs  back inside the lighthouse. The keepers bungalow on Gereaux Island is currently used by the Coast Guard as a station for its Inshore Rescue Boat (IRB) Service. Students are hired each summer through the Federal Student Work Experience Program to help staff the IRB bases, and the one on Gereaux Island is responsible for patrolling between Point au Baril and the mouth of the Bad River.

For a larger map of Byng Inlet Range Front Lighthouse, click the lighthouse in the above map.

Byng Inlet Range Front Range Lighthouse is best seen by boat. Wright's Marina offers a water taxi service that can take you to the lighthouse.