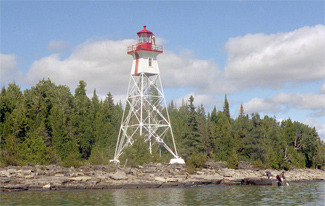 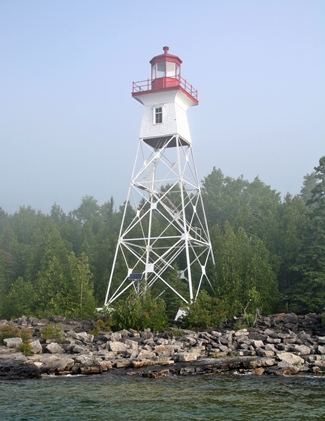 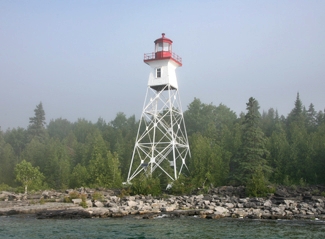 In its report for 1852  1853, the Commissioners of Public Works for the Province of Canada, called for the construction of additional lighthouses:

Captain MacGregor, who had been in command of a steamboat on Lake Huron for several years, recommended that the government construct nine lighthouses on Lake Huron, including one on Badgeley Island and one each on Clapperton island and St. Joseph Island to mark the North Channel.

In 1855, a contract was awarded to John Brown, a Scottish builder from Thorold, to erect eleven lighthouses on Lake Huron. These eleven included the nine lighthouses MacGregor had proposed, save the one on Kettle Point, plus lighthouses for Point Clark, Nottawasaga Island, and Mississagi Strait. Between 1856 and 1859, Brown erected the six lighthouses on Lake Huron and Georgian Bay that are now known as the Imperial Towers, but due to the high cost of these, construction of the lights along the North Channel was postponed.

Nearly fifty years after it was first proposed, a light was finally placed on Badgeley Island, but instead of building just one lighthouse, a pair of lights was erected to help mariners transit this portion of the North Channel with the proper alignment. A square dwelling with a square lantern room centered atop its hipped roof was built on High Beach for the front light, while the rear light was exhibited from a steel, skeletal tower on the southeast point of the island, 580 years from the front light. In addition to the lights, the station was equipped with an oil store and a boathouse. The skeletal tower was provided at a cost of $542.81 by Goold, Shapely, and Muir of Brantford, Ontario, and the iron lantern room for the front light was supplied by the Victoria Foundry Company of Ottawa for $625.26. The range lights were placed in operation in 1912, with the front light having a focal plane of thirty-nine feet above water and the rear light a focal plane of sixty-one feet.

Ferdinand and Merle Solomon arrived on Badgeley Island in March 1946, crossing the ice from Killarney with their three children in a sleigh pulled by a team of horses. It was hard for Merle to not burst into tears when she saw the icicle-covered lighthouse she was trading for their just-sold home in Sudbury.

One day when Ferdinand was in Killarney, the fog rolled in, and a ship starting blowing its whistle. Merle dutifully responded by pumping the stations hand foghorn, but was surprised that this exchange went on for quite some time. When Ferdinand returned, he found his wife pumping the horn with blistered hands, and had to stifle a chuckle as he explained to her that the ship was at anchor and was just sounding periodically to announce its presence to other vessels. When the fog lifted, the ship raised anchor and parted, but not before giving one last salute to acknowledge Merles dedication.

After a typical day at the station, Ferdinand was filling out the logbook and Merle was just reaching for her knitting when the lighthouse shook as if the island had been struck by an earthquake. Looking outside, Ferdinand exclaimed, My God Merle! Theres a ship on our Verandah! The captain of the huge steamer Burlington had decided to let his crew experience some Great Lake history by taking the Turkey Trail (the North Channel) instead of staying out in Lake Huron. It had been some time since the Captain had navigated this route, and he turned his vessel to line up with the Badgeley Range before he had safely passed the island.

The Solomons time on Badgeley Island came to an abrupt end in October 1950, when two-year-old Terry Solomon drowned on the island and Merle could no longer bear being separated from her other children who were attending school in Killarney. The following obituary, dated October 19, 1950, details the tragedy.

Deep water around Badgely lighthouse claimed the life of two-year-old Terry Solomon Tuesday afternoon. Although the little boy was in the water for only a few minutes, lifesaving efforts of his father failed to bring results. The lads father is lighthouse keeper at a light marking the outer passage form Killarney west, located on the south point of Badgely Island, about six miles southwest of Killarney. He was a son of Mr. and Mrs. Ferdinand Solomon. While his parents were still eating dinner at about 1.30 p.m. Tuesday, Terry and his brother Leonard, 3, left the table and went outside to play. In a few minutes Leonard ran back to the lighthouse shouting that Terry had fallen into deep water. Mr. Solomon ran to the waters edge, dove in and brought the body out of nine feet of water almost immediately. When artificial respiration failed to bring the boy back to consciousness Mr. Solomon loaded the body in an open boat with an outboard motor and sped the six miles to Killarney. Dr. J.A. Henry answered a phone call for help by flying from Little Current to Killarney. By the time he arrived, however, it was too late to restore the boy to life.

Frank Sinclair, who was responsible for the lights at Killarney, had wanted to return to his former station on Badgeley Island so gladly swapped assignments with Keeper Solomon.

Around the time range the Badgeley Island Range Lights were established, rock was extracted from the island to determine its potential for a quarry. Though it took several decades, a quarry was opened up on the island around 1970, and extracted material was shipped to various Canadian ports for the production of ferrosilicon and silica sand. In 1981, when the Coast Guard decided to demolish the lighthouse that served as the front range light, they picked a Sunday to do it so the dynamite expert from the Badgeley quarry would be available. The present automated tower was erected at that time.

Located on the southeast point of Badgeley Island, marking the entrance to the North Channel.
Latitude: 45.92866, Longitude: -81.60258

For a larger map of Badgeley Island Lighthouse, click the lighthouse in the above map.

Badgeley Island Lighthouse is best viewed by boat. I visited the lighthouse with Gary Green out of Little Current. He can be reached at (705) 368-2538.