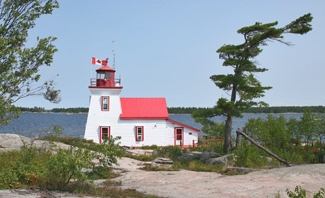 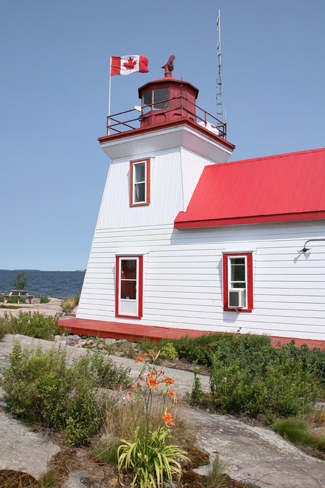 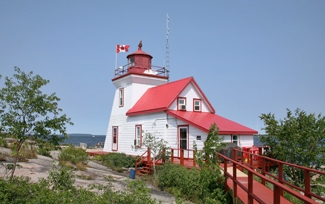 Two pairs of day beacons were established at the opening of navigation in 1899 to help guide mariners into Severn Sound and its communities of Penetanguishene, Midland, Victoria Harbour, and Port McNicoll. The first pair consisted of a fifteen-foot-pole with horizontal slatwork placed on the northern end of Brébeuf Island and a similar structure with a height of twenty-four feet that was erected on the western shore of Beausoleil Island. These daymarks were separated by 2,400 feet and when aligned guided mariners between the southern end of Giants Tomb Island and Sawlog Point on the mainland. The second pair of day beacons featured a structure near Sucker Creek Point and a second near Midland Point that helped mariners pass safely between the southern end of Beausoleil Island and the mainland.

These day beacons served for just over a year, as in 1900, the Department of Marine replaced them with range lights. Gin Island Lighthouse, a square, wooden tower with sloping sides, a polygonal iron lantern, and an attached dwelling, was relocated roughly two kilometres north to Brébeuf Island to serve as the front range light, and a square, forty-two-foot-tall tower that displayed a light from a window near its top was placed on Beausoleil Island to serve as the rear range light. Both lighthouses displayed a fixed white catoptric light at a height of forty feet above the water.

In 1915, the current fifty-two-foot-tall, skeletal tower with an enclosed upper section replaced the wooden tower on Beausoleil Island, and the illuminant used in the range lights was changed to petroleum vapour burned under an incandescent mantle. This change in illuminant coupled with the installation of new reflectors increased the strength of the lights, an important improvement due to the long distance at which the range was used.

Keeper Baxter looked after the light for thirty-one years on Brébeuf Island, and Clifford Paradis, his replacement, matched this, serving from 1931 until electricity was cabled to the island in 1962 and the light was automated. Mary Paradis was happy when her husband landed the job as keeper, since it was the middle of the Great Depression and employment was hard to come by. Living on the rocky island and keeping the light was hard work, as the couple had to cut blocks of ice and store them in an ice house before the arrival of a propane refrigerator and they had to patrol the beach and surrounding water for driftwood to feed their cook stove. Mary tried her hand at gardening during their second season on the island, but the first strong storm swept her green onions and other plantings out to sea.

Brébeuf Island was a lonely place for Joanne, the couples daughter. One summer Joanne suffered from a persistent fever, which Sam Baxter, the brother of the previous keeper, diagnosed as acute loneliness. Sams hunch proved correct, as when Joanne was taken ashore to visit relatives, her fever vanished. A frightening experience for Joanne was watching through the kitchen window at dusk as her father disappeared in the troughs of waves while making his wave over to light the rear light on Beausoleil Island. Even though island life had its drawbacks, Joanne hated to leave her parents and board with guardians on shore when the school year started. Even after the family left the island, Mary and Joanne continued to feel anxiety each year as Labour Day and the start of the school year approached.

After the light was automated in 1962, Creighton "Tiny" Wice, an area manager for Ontario Hydro, was allowed to use the lighthouse on Brébeuf Island as a cottage for twenty years. After this, the government tendered the lighthouse out to the public for five-year-periods, and Ken Mackie, who operated a marina in Honey Harbour, was the first to obtain the lighthouse under this program. Shortly after the Mackie family made their first trip out to their island home, a son went out to use the outhouse and came running back to the lighthouse exclaiming that there were ducklings in the toilet. Ducks often nested in the outhouse during the Mackies time on the island as it offered shelter and was on a high point on the island that quickly dried out in the spring.

Peter Shirriff tendered the lighthouse from 1987 to 1997, but then due to increasing boat traffic in the area, the Coast Guard took back control of the lighthouse and used it as a station for its Inshore Rescue Boat (IRB) Service. Each summer, the Canadian Coast Guard hires students through the Federal Student Work Experience Program to help staff their IRB bases.

In the 1920s, as wealthy tourists were buying up islands in Georgian Bay at an alarming rate, local residents petitioned the federal government to set aside Beausoleil Island, the last large island available in the Thirty Thousand Islands, as a national park. Georgian Bay Islands National Park was created in 1929, and today the park encompasses more than fifty-nine islands. Visitors can take a ferry from Honey Harbour to Beausoleil Island and hike to Brébeuf Rear Range Lighthouse from where a distant view of Brébeuf Island and its lighthouse can be had.

For a larger map of Brébeuf Island Lighthouse, click the lighthouse in the above map.

Brébeuf Island Lighthouse is best seen by boat. You can get a view of the lighthouse from Beausoleil Island, which is part of Georgian Bay Islands National Park and accessible by ferry.