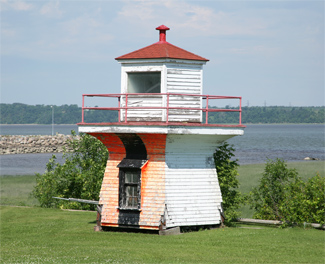 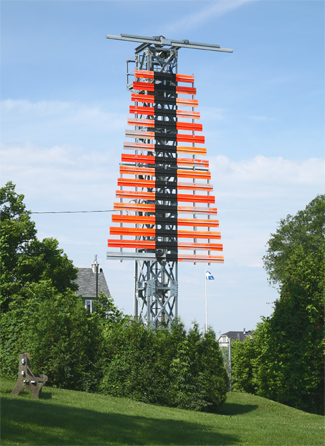 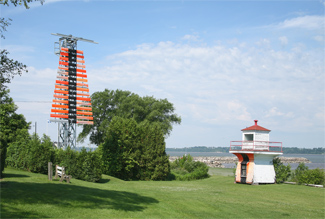 Lotbinière is situated on the southern shore of the St. Lawrence River roughly midway between Deschaillons-sur-Saint-Laurent and Sainte-Croix. In its annual report for the year ended June 30, 1871, Trinity House Montreal included the following justification for the erection of a pair of range lights near Lotbinière:

The immense increase in the size of the vessels arriving in this port, compelled the Board to erect two temporary lights at Lotbiniere. Representations having been made by the pilots and some important shipowners, the Board in view of seven lights already in that locality, thought any additional ones unnecessary; but a committee having been named and a careful examination made, the committee saw the importance of acceding to the application, and as no appropriation had been made for this purpose, tripods made of oars of rafts were erected, temporarily, as well for the approval of the Honorable the Minister of Marine and Fisheries, and also to test their utility. They are found now to be absolutely necessary.

After Parliament provided $1,300 for the erection of permanent lights at Lotbinière, J. Sheridan was hired to construct them in early 1872. A parcel of land, twenty-five by fifty feet, was purchased for the front light for the sum of $50 from Onesimo Beaudet, who was hired as the first keeper of the light. Octave C. De Lachevrotiere sold thirty-square-feet of land for the back light along with a right-of-way for the sum of $100, and he was hired to look after the rear light. In 1874, the Department of Marine also acquired a lofty spruce tree near the rear light for $25 so the tree could be used, along with the range lights, as an aid for navigating the Richelieu Rapids.

The following description of the towers of Lotbinière Range was recorded in 1878:

These two lights (upper and lower) are about 1,300 yards apart.

The lighthouse is a square wooden building, painted white, with oil shed combined.

In 1899, fifteen trees that obstructed the rear light were cut down, and in 1920, a new skeletal steel tower with an enclosed wooden watchroom and lantern room was built to increase the visibility of the front light. This fifty-five-foot-tall tower was supported by concrete pillars on a concrete platform and increased the focal plane of the front light from twenty-three to fifty-one feet.

At some point between 1947 and 1949, an eighty-five-foot-tall steel, skeletal tower, with an enclosed wooden watchroom and lantern room, was erected to replace the old wooden rear tower. This new structure raised the focal plane of the rear light to a towering 161 feet above the river.

In 1993, a fifty-one-foot-tall, square, skeleton tower with an exposed light replaced the rear tower erected in the late 1940s, and a similar structure with a height of forty-one-foot was installed for the front range light in 2006. The enclosed upper portion of the front tower that served from 1920 to 2006 is on the ground near the current front light tower.

For a larger map of Lotbinière Range Front Lighthouse, click the lighthouse in the above map.

From QC-132 in La Vieille-Église, turn toward the river on Route du Quai and you will see Lotbinière Range Front Lights on your right behind a house.

The active range light is owned by the Canadian Coast Guard. Grounds/tower closed.