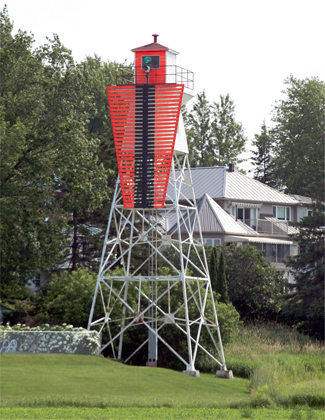 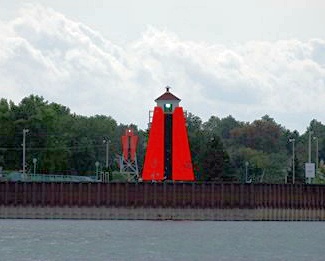 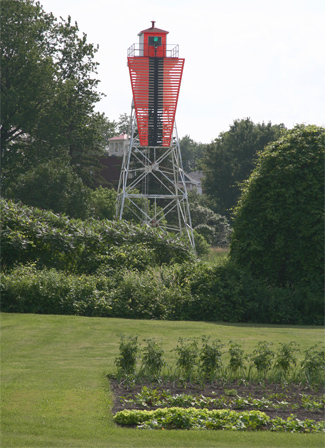 Range lights, known as Verchères Village, were established on May 1, 1902 to serve a new shipping channel dredged between Île Bouchard and the southern shore of the St. Lawrence River. This new range lead from the intersection of their alignment with that of the Contreceour-Verchères Range Lights to the intersection of their alignment with that of the Verchères Traverse Range Lights. Both of these other other range lights were located downstream from the Village of Verchères, but Verchères Traverse Range exhibited its lights upstream to mark the channel right off Verchères, while the Verchères Village Range exhibited its light downstream to mark the channel below the village.

The Annual Report of the Department of Marine for 1902 provides the following description of the Verchères Village range lights.

The front light is fixed white catoptric, elevated 44 feet above the summer level of the river; visible 12 miles in, and over a small arc on each side of, the line of range, and is shown from a square wooden lantern on a square wooden tower with sloping sides standing upon a cribwork pier, 380 feet S. 61° E. from the outer end of the village wharf.

The pier and tower are white and the lantern roof red; the height of the tower from the pier to the ventilator on the lantern is 31 feet.

The back light, distant 1,950 feet S. 54° 30' W. from the front light and 1,160 feet S. 88° 50' W., from the village church, is fixed white catoptric, elevated 85 feet above the summer level of the river, visible 15 miles in, and over a small arc on each side of, the line of range, and is shown from a square tower with sloping sides, consisting of an open steel framework painted brown, surmounted by a wooden watchroom painted white, and topped by a square wooden lantern painted red. The height of the tower from its base to the ventilator on the lantern is 65 feet.

In 1929, the front range tower was rebuilt in the form of a skeletal tower topped by an enclosed lantern room.

Besides the range lights, another aid was established at Verchères in 1909 in the form of a marine signal station housed in an old windmill near the front range light. By means of signals placed on a tall mast that stood near the windmill, information could be sent between ship and shore. The mast was sixty-feet tall, with a twenty-five-foot-long cross-spar about twenty feet from its top. Signals displayed at the west end of the cross-spar related to points above the station, while signals on the east end referred to points below the station. For communicating messages, the International Code of Signals was used.

The windmill, along with eight other signal stations between Quebec City and Montreal, were connected by a private telephone line so the position of vessels could be quickly reported. Vessels could receive information on the weather, wind, and ice conditions as well as any dispatches addressed to them.

The following information on the old stone windmill at Verchères was recorded by the superintending engineer of the St. Lawrence River Ship Channel in 1910:

After negotiating for two years, the old Windmill property at Vercheres, P.Q., was finally acquired by the department, and possession was taken on April 1, 1909. Two objects were attained by this transaction, viz.:  The following are a few notes concerning the history of the old Windmill furnished by the parish priest at Vercheres, who had made extensive researches concerning the matter :  Vercheres was founded about 1667 by M. de Vercheres, an officer in Carignans Regiment, to whom the Vice-Roy or Governor of New France had conceded a piece of land, now known as the parish of Vercheres.

M. de Vercheres immediately founded an establishment there, which he defended against the attacks of the Iroquois, with the aid of a few colonists.

The most important event during the early days of the colony of Vercheres, was the defence of this establishment by Mile. de Vercheres in 1692.

In the spring of 1692, a party of Iroquois attacked the colony. Most of the colonists were away clearing land, and M. and Mde. de Vercheres were absent on a voyage to Quebec for the purpose of securing assistance from the governor for his tenants.

Mile. de Vercheres, with the aid of two old experienced soldiers, had taken refuge in the fort, which had been built near the river side, and from this fort she defended the colony of Vercheres, and repulsed the Iroquois, who would probably have set fire to the place and destroyed all life and property.

It is rightly supposed that the fort of Vercheres is no other than the Old Windmill situated near a creek, and opposite the Richelieu and Ontario Companys wharf.

Old documents and the actual site of the mill prove the foregoing. We also read in the History of Canada by Ferland, that the fort of Vercheres was situated near a small river which flowed into the River St. Lawrence close to the site.

The old stone windmill served as a signal station until 1949, when it was acquired by the municipality of Verchères. The municipality restored the windmill in 1991, and today it is open during the summer as an art gallery.

For a larger map of Verchères Village Range Rear Lighthouse, click the lighthouse in the above map.

From Autoroute 30, take Exit 147 for Verchères and drive northwest on Montée Calixa Lavallée for 3.4 km (2.1 miles). When the road ends, turn right onto Route Marie Victorin (QC-132) and then make your first left onto Rue Madeleine. Verchères Village Range Front Lighthouse is found on a breakwater at the marina at then end of Rue Madeleine. From a large parking lot near the front light, you can walk through a park to get pictures of the rear tower.