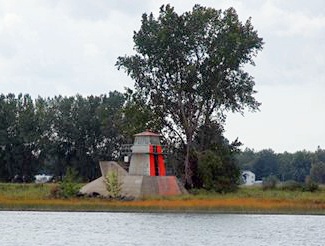 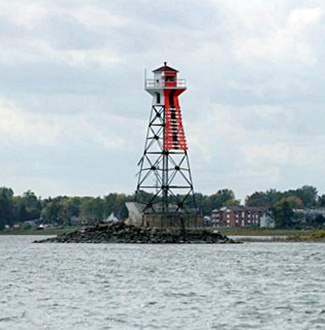 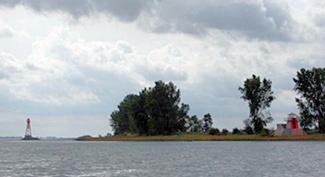 Île Hervieux, located just offshore from Lavaltrie, was recognized early on as an ideal site for range lights to guide mariners along the stretch of the St. Lawrence between Lavaltrie and Sorel. The first towers were erected on the island in 1831, and in 1861, the range, known as the Lavaltrie Range, consisted of two square, wooden towers: a nine-foot-tall front one and a seventeen-foot-tall rear one.

The following description of the ranges lights was given in 1873, when Denis Giguere, who was in charge of the lights for nearly forty years, was keeper:

This light consists of two flat-wick mammoth lamps, and fifteen inch reflectors in each of the two towers, 320 yards apart, one being twenty-one and the other thirteen feet above high-water mark. Lighting apparatus catoptric. Size of glass 25 x 20 1/2 x 1/8, and 23 x 28 x 1/8, and consumes about 120 gallons of oil per season. The smaller tower, which is removed at the end of the season of navigation, is not in good condition; and requires considerable repairs, and probably renewing very soon. The pier or block upon which it is placed, has been considerably damaged by the action of the ice from its exposed position. I requested the keeper to place about five toise of stone around it to make it more secure, this being recommended by Capt. Cotte and the keeper.

The front tower was renewed in 1874. Due to the height of the river in the spring of 1876, one of the range towers was carried away by the ice, and its pier was greatly damaged. Some of the pieces were recovered, and both the tower and pier were promptly repaired. J. Sheridan of Montreal erected a new rear tower for the range in 1881 at a contract price of $496. Both piers were rebuilt in 1885.

The rear tower was carried away by ice in late 1888, requiring the erection of a new tower with a new set of lamps. This wooden tower lasted just a few years before it was replaced in 1896 by a skeletal steel structure, square in plan, with sloping sides and surmounted by a square galvanized iron lantern. The following year, in 1897, urgent repairs were made to the pier under the back light. Two toises of stone were placed around the pier, and new iron corner plates were installed.

For a larger map of Lavaltrie Range Lighthouse, click the lighthouse in the above map.

The lights are best seen by boat, but a distant view of Lavaltrie Rear Range is possible by turning toward the river onto Rue St. Antoine from QC-138 in Lavaltrie and continuing to the dock at its end.