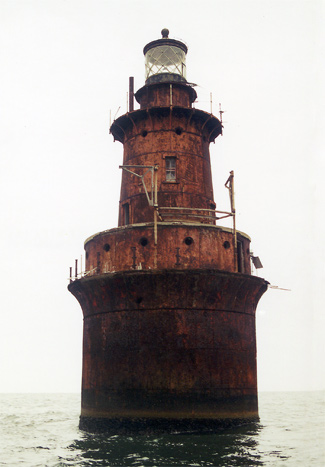 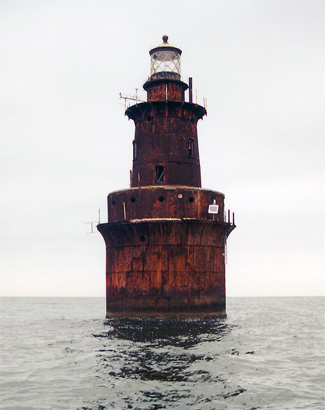 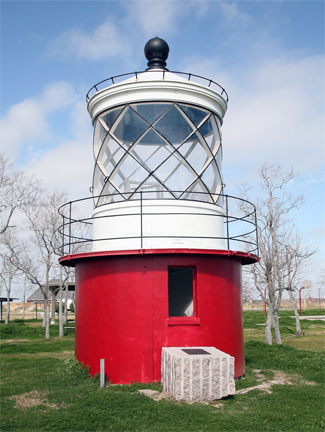 The Sabine River, which doubles as a good portion of the Texas-Louisiana border, functions as a natural funnel, directing commerce downstream towards Port Arthur. However, the difficulty of entering the river from the Gulf of Mexico prevented large, oceangoing vessels from reaching the port. Finally, in the 1890s, jetties were constructed at the rivers mouth creating a stable, deep channel and giving rise to a dramatic increase in shipping traffic at Port Arthur. At last, the resources of the area, which included the crude oil and refined products from the Spindletop field, were readily accessible. In the Gulf of Mexico, roughly sixteen miles south of the entrance to the Sabine River, Sabine Bank lies hidden a mere twenty feet below the surface of the water. In 1888, Congressman William H. Crain proposed a lightship for Sabine Bank, which measures about thirty miles long and five miles wide, but the district lighthouse engineer in New Orleans didnt see the need for such a measure. A decade later, the Lighthouse Board finally did recommend the construction of a lighthouse to warn the numerous deep-drafted vessels now calling at Port Arthur of the potential offshore danger, and Congress appropriated $40,000 in 1900 and 1901 for the project. The action was taken too late for the British steamship Athena, the steamer Venitia, and the Italian vessel Fratelli Gazolli, which all ran aground on the bank between 1899 and 1901.

Bids were solicited for the construction of two types of lighthouse: a screwpile lighthouse and a caisson lighthouse. When the bids were opened on January 8, 1903, the bids for a caisson form of lighthouse were the lowest. A $33,890 contract was awarded to the Russel Wheel and Foundry Company of Detroit Michigan for supplying the necessary metalwork, and the work of erecting the lighthouse was awarded to W.R. Taylor for $37,115, but he refused to sign a contract. The work of erecting the lighthouse was rebid, but when no bids were received, a lighthouse engineer was assigned to see the project completed using hired labor.

After the metalwork arrived from Detroit by railway, the lower courses of the caisson were assembled onshore, launched, and then towed to the offshore site on June 23, 1904 by the lighthouse tender Arbutus and the tug Dello. Before the caisson arrived at the site, a wooden wharf had been built to store supplies and aid in the construction. A wooden cofferdam was built in the bottom of the caisson and connected to a central air shaft. This watertight chamber was then pressurized to keep the seawater out and allow men inside to remove the sand and muck below the bottom edge of the caisson. On July 21, the caisson, which stood in eighteen feet of water, had sunk to the target depth of twenty feet into the shoal. The caisson was then filled with concrete, except for a cylindrical area at its top, which would hold the stations water cisterns.

The caisson portion was completed in August 1904, but as funding was depleted, the project was put on hold until the following July when Congress allocated an additional $12,000. To mark the man-made navigational obstacle during this interval, a temporary lens lantern was placed atop the caisson. Workers were busy assembling the five-story superstructure when a storm struck the construction site. On the evening of October 7, 1905, the barometer plunged, the seas rose, and the crew was ordered to vacate their quarters on the temporary wooden wharf for the safer confines of the caisson. Conrad Thompson, who was supervising this phase of the project, described the ordeal. As the men were in the open caisson sitting up that night a spray would come over every once and a while and wet all hands. There was no sleeping that night and the next day for any of us. After this sleepless period, the storm quickly abated, and work was resumed after minor repairs were made to the wharf.

Enameled bricks were used to line the inside of the tower and to partition the cylindrical space into wedge-shaped rooms. After $101,353.67 had been expended, the tower, fully staffed with a keeper and three assistants, first exhibited the light from its fixed, third-order Fresnel lens on March 15, 1906. The lighthouse was painted with red and measured fifty feet tall from the top of the caisson foundation to the ventilator ball on the lantern room. To assist mariners during periods of low visibility, the station was equipped with a first-class Daboll trumpet that was powered by two five-horsepower oil engines and produced a five-second blast every thirty seconds.

Given its remoteness, keepers often served several weeks or even months at Sabine Bank Lighthouse before being relieved, which might explain why it was difficult to secure and retain keepers for the station. The district superintendent in New Orleans complained, It has been necessary to pick up men who were not on the eligible roster, wherever they can be secured, in order to fulfill frequent vacancies at this isolated station.

On August 16-17 1915, a hurricane passed near the lighthouse, and the resulting high seas tore away three-quarters of the gallery-level veranda, along with hatches, storm shutters, the water closet, sections of the cast-iron plates, and two of the stations boats that were suspended from davits. The monstrous waves swept completely over the structure, allowing seawater to penetrate the tower and contaminate the stations drinking water. The keepers kept the light burning until lack of water forced them from the station on August 19. The light was relit on August 23, when the rehydrated keepers returned to the station. Albert B. Modawell, keeper, James Brew, first assistant keeper, Joseph W. Gauthier, second assistant keeper, and Ulysses M. Gunn, third assistant were commended by the Secretary of Commerce for performing their duties under hazardous and trying conditions.

After the beating the tower took during the storm, the gallery level was enclosed with three-quarter-inch iron plates dotted with thirteen air ports and topped by a reinforced-concrete roof. These repairs cost just over $15,000 and helped the tower fare better when another powerful hurricane struck the station in 1920.

Keeper Modawell survived the 1915 hurricane in the lighthouse, but he had another brush with death in October 1916. The Coast Guard cutter Comanche was coming out of Sabine Pass when its crew spotted an object bobbing on the horizon. At first, it was thought to be a piece of driftwood, but the crew decided to investigate and discovered it was a small boat with the keeper aboard. Keeper Modawell was trying to get medicine when his engine broke down, and he was subsequently at drift for over twenty-four hours without food or water.

In October 1920, Assistant Keeper C.H. Peoples was picked up at sea by the Norwegian tanker Belridge after being adrift in a disabled motorboat for two-and-a-half days without food. Peoples was weak from exposure and lack of food, but was otherwise in fair condition.

To save the $5,409 annual expense of staffing Sabine Bank Lighthouse, an acetylene lantern was activated in the Fresnel lens on August 22, 1922, and the last resident keepers left the station. The new acetylene light consisted of a cluster of three burners that produced a two-second flash every five seconds.

After being manned for just seventeen years, the lighthouse was fully automated. While the automated light was very reliable, there was at least one instance when having a keeper on the station would have been helpful. On the night of April 19, 1924, the keepers at Sabine Pass Lighthouse noticed the light at Sabine Bank was not visible, even though it was a clear night. The next day, it was discovered that a port on Sabine Bank Lighthouse was open, and a small hawk, still in the lantern room, had put out the pilot flames.

Sabine Bank Lighthouse was temporarily occupied during World War II as a coastal lookout station. In 1960, the light source was converted to a 150-watt lamp, powered by a 32 Volt DC battery. With no live-in keepers to care for the tower, it was steadily falling into a state of disrepair. Had the lighthouse been closer to shore, the required maintenance would have been much easier and more affordable.

The Fresnel lens was removed from the lantern room in 1971, and the tower was converted to solar power. You can see the solar panel and light mounted on the gallery level of the lighthouse in the color picture on this page, which was taken in February 2001. Finally, when the condition of the lighthouse threatened the safety of those sent to maintain the light, the decision was made to replace the tower with a steel, skeleton structure.

On March 1, 2001, the Coast Guard published a notice soliciting bids for the reconfiguration of Sabine Bank Lighthouse that read, in part: The work consists of demolishing and removing the lighthouse structure above the caisson foundation, replacing the structural main deck at the top of the caisson and installing a new 55-foot tall steel skeleton tower on the main deck. Additionally, the caisson foundation will be rehabilitated with all steel surfaces above the water line to be blasted and painted and installation of new access ladders and main deck handrails. The estimated price range is between $500,000.00 and $1,000,000.00.

Astron General Contracting of Jacksonville, North Carolina was awarded the contract to reconfigure the lighthouse and began the work in late January 2002. The top section of the lighthouse tower and the lantern room were dismantled and returned to shore, where they were refurbished by R.L. Eldridge and William D. Quick before being placed on display at Lions Park in Sabine Pass, Texas. The original third-order Fresnel lens, manufactured in Paris by the firm of Barbier, Benard, and Turenne, can be seen at the Museum of the Gulf Coast in Port Arthur.

The lighthouse was originally located fifteen miles out in the Gulf of Mexico from where the Sabine River empties into the gulf. The refurbished top portion of the lighthouse is now on display at Lions Park in Sabine Pass.
Latitude: 29.73482, Longitude: -93.89392

For a larger map of Sabine Bank Lighthouse, click the lighthouse in the above map.

To visit Sabine Bank lighthouse in its original location, we chartered a boat in Port Arthur to take us across Sabine Lake, down the Sabine River passing Sabine Pass Lighthouse, and then out to the lighthouse. The top of the lighthouse can be see at Lions Park in Sabine Pass located at the intersection of 7th and Broadway.

The lantern room is owned by the City of Sabine Pass. Grounds open.


This trip came right after our trip to the Farallon lighthouse. Approximately the same distance, totally better experience for me and my tummy. Ditto for the friends!